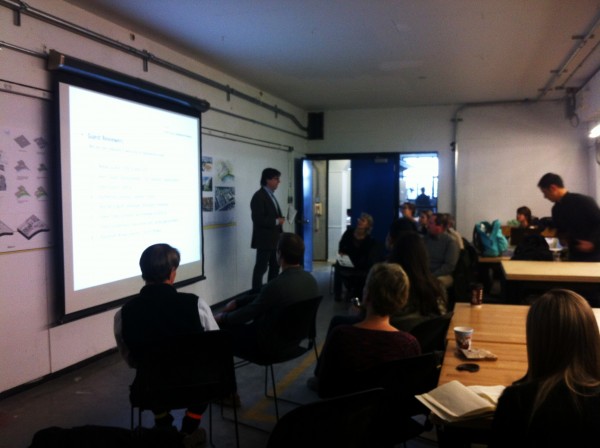 As the current issue of Spacing magazine, featuring a cover story on urbanism in education, spends its final days on newsstands, Spacing Ottawa takes a look at a current undergraduate urban design studio in the Nation’s Capital:

One of the greatest attributes of academia is its often de-politicized environment, which can allow for creative and controversial ideas and topics to be explored outside the limitations of budgets, personal interests, or politicking. However, it is equally important that that which is discovered and developed within the confines of higher education be both informed by, and in turn inform, the community and profession in which the research pertains to.

However, the ideal situation is when academic explorations can be used as a sort of think-tank that brings together community members, politicians, and other stakeholders, along with students and scholarly researchers, to allow for a rich discussion and learning to take place. This task of making meaningful connections and contributions between student work and the community is, therefore, one of the most notable goals of Carleton University’s Azrieli School of Architecture and Urbanism’s Urbanism stream, run under the direction of Professor Ben Gianni.
. 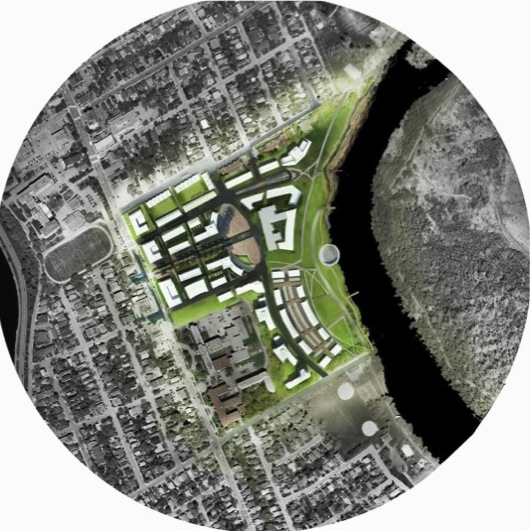 The program’s most recent design studio, which held its final reviews on Tuesday, December 17, looked at the current and future conditions of a parcel of land located at 100 Main Street, in Old Ottawa East, and the former site of the Oblate Fathers and the Sisters of the Sacred Heart. The property, which is approximately 16 hectares, includes a large heritage-designated building, the Deschâtelets residence, and is slated for major development once sold.
. 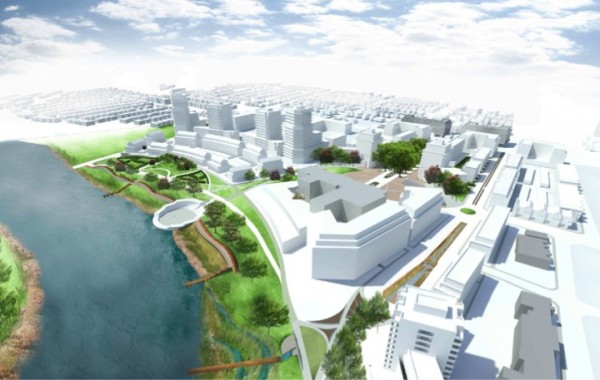 It is therefore, an almost-literal blank site, bordered by Main Street and the Ottawa River, with both great potential, but also equal concern for the quality, livability, sustainability, and density of the sites development. For a student, this program requires the ability to be simultaneously creative and critical, needing to be aware of the sensitivities of the existing community and currently established design guidelines, while balanced with the viability of certain options for a potential developer with a bottom line.

Yet while intensification is sure to happen on the site in the coming years, the project has often become heated between local residents and possible developers, and this has lead to the Old Ottawa East Community Association (OECA) seeking to be as involved as possible in the consultation phases of the project, along with the support of Capital Ward City Councilor, the Honourable David Chernushenko. There has also been a Community Design Plan (CDP) developed for the neighbourhood, in addition to the approval to redevelop Main Street into a complete street, with construction slated to begin next August, and has shown how effective a community-led association can be in managing growth. The OECA has done all of this through community meetings, engaging City Hall, and organizing events such as a neighbourhood and site walking tours, as well as their involvement with Carleton’s Urbanism stream.
. 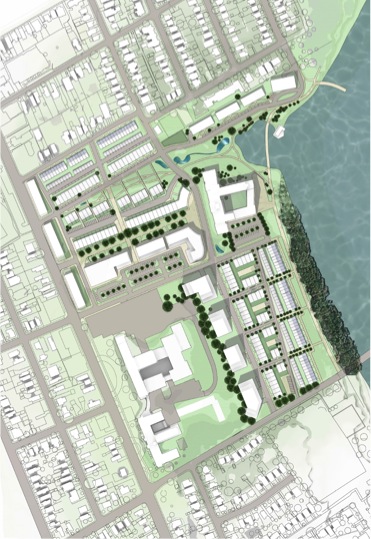 The studio, divided into four groups of three to four students, looked at the case study of the Oblates sites with the objective of developing it in a sustainable way, taking into consideration both current site guidelines and local concerns. There was also a required target density of 1200-1500 units, which was to be achieved by the students through including a combination of mid- to high-rise buildings, and with a mix of housing typologies from townhomes to towers. The selection of this site, in addition to the history of community involvement it brings, therefore, helped to fulfill the studio’s dual goal to educate students and engage the community.
. 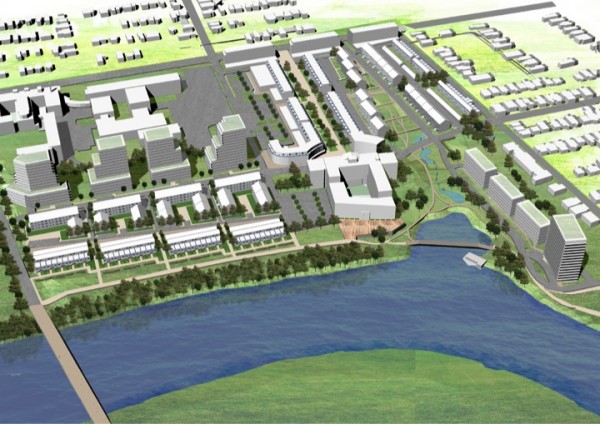 This goal was also achieved by breaking down the studio in to three phases, much like an actual project would be, starting with a review of Ottawa planning policies and plans, current urban design trends, precedent studies, and site documentation and target settings. This was followed by the initial design stage, which explored how 1400 units could fit on the site, how road and pedestrian infrastructure might be balanced, and how mid-rise buildings might be deployed to balance scale and density in response to the larger context of both the neighbourhood and greater city.

Next, students focused their design explorations on, as Martha Schwartz termed it, EOB, or everything outside the building, while revisiting and redefining sustainability goals, and by introducing different housing typologies, in particular townhouses and stacked towns. These stages and process led to the student teams developing, as Professor Gianni described it, four variations of a theme, with detailed overall plans, renderings, and perspectives, with their site designs being tested against the various needs and wants of both the community and the possible developer.
. 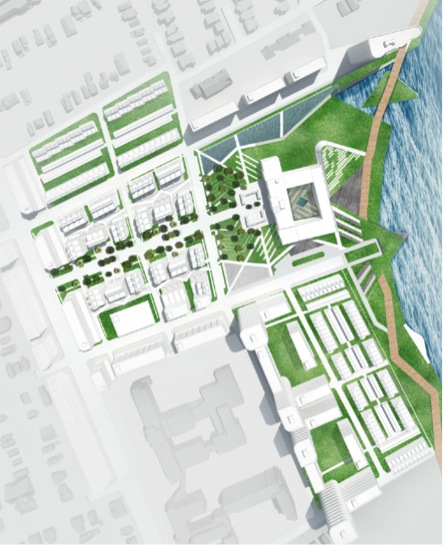 The results were educated, exploratory, and generated long discussions by those present for the reviews, as the students proposed pedestrian streets, swales, retail corridors, beach frontages along the water, and even a bridge across the Rideau River. There was a common desire between the teams to connect the development and community back to the riverfront, green the site, and create a mix of housing and lifestyle options, while creating an attractive place for Farmers Markets and the rest of Ottawa to visit.  There were also different approaches to the existing heritage building, and as to how to best distribute the site’s density, along with the evident struggle of balancing parking requirements with creating a pedestrian-focused development.
.

What this studio has been most successful in, however, and aside from the high quality of student work, was the bringing together of different interest groups who, outside the relative neutrality of student work, may otherwise have trouble discussing such issues, and has allowed for the already successfully mobilized OECA, and their sub-group Sustainable Living Ottawa East (SLOE), to gain an ever greater voice in the discourse around the project. According to Professor Gianni, this is, “a story about a community attempting to take its density into its own hands,” while recognizing that the site will be owned by a private developer in the very near future.

Yet while the OECA was the hypothetical client for the studio project, it is important to remember that the school does not work for anyone, allowing for a safe space for both community members and the development team to meet and discuss issues, in addition to the students gaining professional practice knowledge through sharing and receiving feedback on their work by professionals in the field. It is for this reason that members of all parties involved in the site were included in intermediary reviews and guest lectures throughout the studio, in addition to the names and titles of those who attended the final reviews including everyone from a City Councilor to local architects, planners, and community members, in addition to the possible future owner and developer of the site.

It is for these reasons that Carleton’s urbanism studios can be seen as real-world experiences in planning and design, as well as answer the question of, why does it make sense for students to investigate these issues? From gaining the experience of working with professionals in the field, learning to listen to community interest groups, and having the chance to explore controversial sites without the political baggage that they are often entrenched in, a urban design studio such as this can benefit both the students and those most personally effected by the project, for as Professor Gianni explains, it is the students work which can “give three dimensional built form to ideas to allow for discussion.”

And it is these discussions, between academia and the community, that need to happen more often, for both the benefit of the students and neighbourhoods they are often living and working in.

Thank you to Professor Gianni for opening up your studio to Spacing Ottawa.

Images: All images are curtsey of the students who participated in the design studio, under the direction of Professor Ben Gianni, Carleton University, and are used with permission.