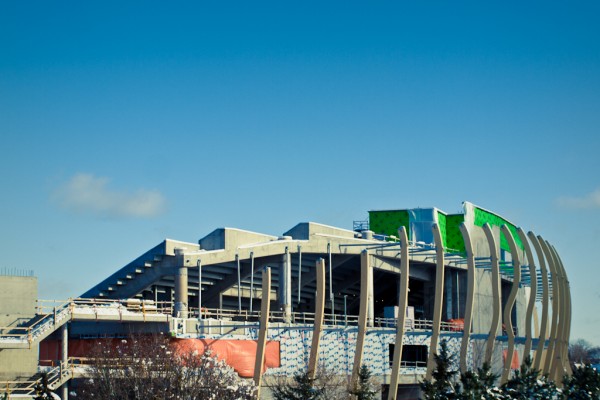 Yesterday’s reported news that the historic and landmark site of Lansdowne Park is expected to be renamed TD Place, upon its reopening later this year, only worked to further confirm a growing trend being seen throughout the city and Capital Region; Ottawa seems to be changing names faster than we can adjust our collective memory, and no place or name is safe, as long as someone’s pockets are deep enough.

With this past summer’s shift to the medically sounding CT Centre (formally known as the Canadian Tire Centre, and formerly known as Scotia Bank Place, the Corel Centre, or the Palladium – depending on who you ask), and the renaming of the Museum of Civilization in Gatineu, Que., to the Canadian Museum of History in December (which is a heated debate unto itself, and for another time), it would not be surprising to find tourists asking for directions, and locals being unsure of where to point them.

And while the name CT Centre (often abbreviated to the CTC – but really, who calls it that?) will take some getting used to, it should come as no surprise that a sporting venue would continue to use corporate sponsorship and branding to fund itself, with even the iconic Skydome losing its name to the almighty Rogers. But this is nothing new, as arenas, fields, and stadiums often resemble soccer jerseys, with corporate logos emblazoned across the sides of their stands or venue.

However, while we all know this does not add civic identity, create community, or aid in place-making, we accept it, because it pays for our hometown teams. Besides, these arenas are often so banal in their design that they already lack any sort of real character in the first place, with a name change resulting in little difference to their already non-place existence. The CT Centre was already goofy enough in its coliseum-esque pastiche, before losing it more fitting, albeit cliché, original moniker.

But we are no longer simply talking about a sports centre succumbing to the financial pressures that result in such naming. For it is not Frank Clair Stadium or the Ottawa Civic Centre, after all, that are being renamed  (yet, that is. By the way – good on you FCS and OCC), but rather an entire site, which will also include commercial, park, and residential spaces. And while it is not unheard of for mixed-use towers which include some of these programs to also be named through sponsorship, Lansdowne Park is a historical and significant place, and name, within the Ottawa psyche.

What then, does this all mean for a site that will not only become home to hundreds, and used by thousands, but also one that is situated in the community-focused neighbourhood of the Glebe? And how does this affect our historical ties and identity to a site that is hoped to once again become a heart of the city? Ultimately, what we will be losing is more than just a name. It is a history, a character, and a place.

According to The Citizen’s report, “The agreement will pay OSEG an annual fee — said to be in seven figures — which will also allow for a full service TD banking centre at Lansdowne.” But while we can put a monetary value on the actually pay-off for naming rights (not including the costs of rebranding an entire site), what is not included in the calculations is the cost to our city’s identity.

Lansdowne Park has been a part of Ottawa’s history since 1868. But with a few million dollars, it appears 145 years of existence can be bought.

So, who wants to join me on Sundays at the ‘TD Farmer’s Market’?

UPDATE: In the official announcement made on the afternoon of Tuesday, January 7, 2013, it was announced that it is in fact Frank Clair Stadium and the Ottawa Civic Centre which will be renamed as TD Place. While this is a more logical move and expected in terms of sports branding and corporate sponsorship, with a monument planned to honour Frank Clair in lieu of a stadium to bare his name, Ottawa will still be losing a cultural connotation to a corporate company. As of this time, The Ottawa Citizen has not changed its article, which this story responds to, stating, “Lansdowne Park is expected to be renamed TD Place when it reopens in 2014, the Citizen has learned, after the Ottawa Sports and Entertainment Group reached an agreement on naming rights for the entire facility with the TD Bank Group.” So while TD Place at Lansdowne Park may be less invasive than losing Lansdowne completely, it is still a sting to the city. No information pertaining to the name change is currently available on the OSEG media page.

EDITOR’S NOTE: In the first few minutes of publication for this story, it was stated that Lansdowne Park was to be renamed TD Centre. This was an error which was quickly changed to TD Place, as reported in the article by the Ottawa Citizen. We apologies for this oversight.