While the National Capital Commission was pleased to announce the success of their public consultation with nearly 8,000 responses to the questionnaire on the redevelopment of LeBreton Flats, we are left asking to what end? How will the content of those questionnaires be compiled? Who will see the results? How will public feedback be used, if at all, and at what stage of the decision making process?

The high level of civic engagement and serious debate on the redevelopment of LeBreton Flats will help guide this historic project to a successful conclusion.

Yet many, myself included, were disappointed because the public consultation lacked precisely that; opportunity for meaningful engagement and serious debate.

Despite a few leaks, no details were shared about either proposal until the public presentations on January 26 and 27 at the Canadian War Museum. Neither the formal presentations, that were more marketing than informative, or the Q&A session were sufficient for facilitating serious debate.

With only two weeks to participate in the only official form of public feedback, the extremely limited format of the online questionnaire contributed little more than a flood of knee-jerk reactions and poll of individual opinions. Engagement and debate require an opportunity to interact.

The number of questionnaire responses shows sincere public interest. The NCC should be excited. Sadly we have not been given a platform to actively engage in prioritizing goals or guiding principles to construct the groundwork for a responsible and meaningful development.

On the “ladder of citizen participation”—a tool devised in the 1960s by Sherry Arnstein for classifying participation—the LeBreton Flats process sadly falls at best in the “tokenism” category of placation, consultation, and informing. There is no partnership or citizen power.

Especially in the light of the history of the Flats as emblematic of the kind of authoritative control of the highly criticized and problematic mid-century approach to urban planning, we have to wonder whether our present day process is realistically any more sensitive or sensible.

The NCC’s stated goal is “ensuring that Canada’s Capital is a dynamic and inspiring source of pride for all Canadians, and a legacy for generations to come.” As the “largest and most significant urban development site in Canada’s Capital,” the LeBreton Flats redevelopment is expected to live up to that standard.

I am not alone in my concern that the proposal process and terms severely limited the potential for excellence and diversity of options. The terms of the Request for Qualification and Request for Proposals frame LeBreton Flats as a business problem, in need of a business solution, and offering business potential.

The point-rated evaluation outlined within the Request for Proposals substantially prioritizes market rationale and business model requirements over quality or appropriateness of vision. The NCC certainly has a duty to ensure its projects are economically responsible, but economic feasibility and profitability are not the same thing. 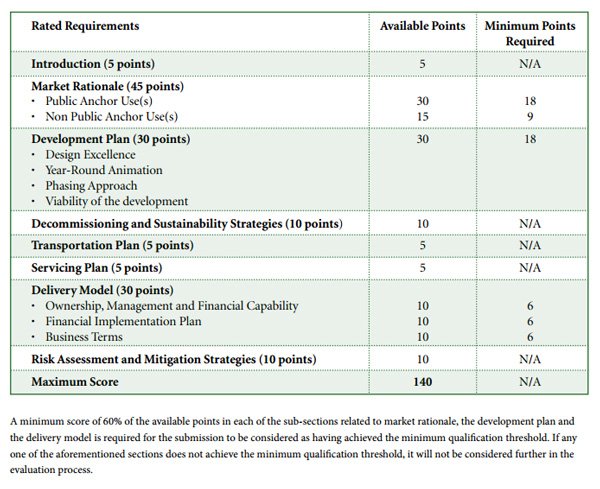 The strength of the NCC position on LeBreton Flats is in recognizing it as an important piece of land with significant potential, far greater potential than just economical. To miss this opportunity for an authentic exchange of diverse ideas is hugely disappointing.  We need to clarify what social, cultural, heritage and environmental elements would be “an inspiring source of pride for all Canadians”.

Many argue that we have waited long enough and anything is better than waiting any longer. Precisely because of its significance and troubled history, careful consideration should not be sacrificed in the name of expediency.

With all due respect to the time and efforts invested by the two proponents and the NCC, the process and therefore the proposal falls seriously flat in offering any meaningful or responsible vision that speak to this aspirations of a vision and legacy for the capital.

We are consistently presented with a confrontational process. The proponents are asked to compete; may the best man (most profitable and marketable proposal) win. The public is asked to complain, critique, or concede. How are we supposed to construct or support a collectively meaningful “vision for the capital” when community input is reduced to individual wishlists and personal taste? It is a recipe for irreconcilable disagreements.

From Lansdowne, to the new Central Library, to condo development, to new bikeways and road expansions, the city seems exhausted by and less than sympathetic to complaints about the lack of public consultation. With the additional flurry of 2017 projects moving forward on a very specific deadline, Ottawa is overrun with projects and spreading our collective and individual energy to have a meaningful discussion dangerously thin.

We may want to hold off on celebrating Ottawa’s “extreme makeover” until we see what shortcuts are being overlooked and what kind of lasting legacy we are really left with.

It is not so much a matter of asking for more public consultation. What we need to ask for is more meaningful, transparent, and collaborative goal setting and vision making.

—
via yowLAB: Ottawa’s architecture and design ideas lab. UrbSanity is co-published by Centretown Buzz and supported by the Canada Council for the Arts