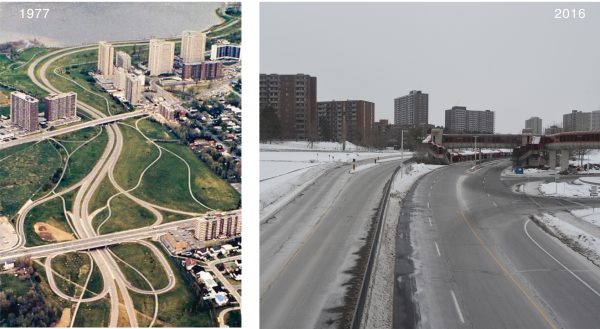 What is the best use of public land? Who should be privileged with the best views of the river? How does national identity intersect with everyday use?

These are just a few of the questions asked by fourth year Carleton Architecture students this past semester. Looking at Pinecrest Creek in the west end, the team questioned how to address the gaps created when utopian creations several decades past are now home to families with less resources; the gaps created as beliefs about lifestyles evolve while the context remains the same; and the possibilities created when major infrastructure is reworked, as is the case with the construction of an LRT. As there will indeed be an LRT line serving the area within the relatively near future, the answers to these queries become increasingly pertinent.

The Pinecrest Creek area posits an intriguing project site through which to explore the many components that make up a city. Particularly, the existing conditions are relevant both here in Ottawa in a number of neighbourhoods, and throughout North America. As Ottawa is our nation’s capital, we can use the site to put forward best practices in the design of public space and revitalization of mid twentieth century development. Major components of the site that needed to be addressed were:

In addition to researching these physical components of the neighbourhood, the team undertook a number of community consultation sessions to get a better feel for the social fabric. Students from Regina Street Public School’s Mud Lake Program got involved, seniors through Carefor, Parkdale food bank and the local stylist all provided very valuable insight about their wants and needs, which greatly informed the students’ work and further helped to ground the project in reality.

Ultimately, the final project is part urbanism, part architecture; it leverages a linear park to revitalize older infrastructure, daylights a creek to improve the ecology of the area, and infuses new commerce through several insightful, well placed mixed use buildings.

The site model and panels are on display at the Main Branch of the Ottawa Public Library, 120 Metcalfe Street, 3rd floor.

Edit note: Please note an earlier posted version of the story mentioned a discussion at the NCC urban lab on June 8. Unfortunately the discussion will not be open to the public as previously reported.