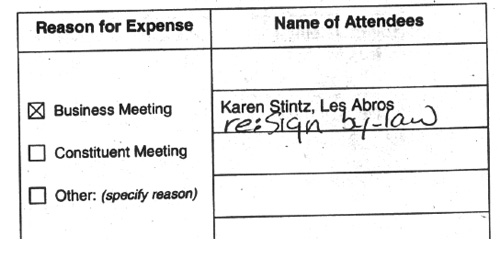 On January 9, 2009, City Councillor Karen Stintz had a business lunch with Les Abro, president and CEO of billboard company Abcon Media.  They went to The Abbot, a pub on Yonge Street north of Lawrence.  Stintz had a shepherd’s pie, a soda water, and a tea; Abro had a burger, a cranberry juice, and also a tea.  We know this because Stintz submitted the receipt to have her meal reimbursed by the City [PDF, 3rd page].  (Two glasses of Ironstone wine were additionally ordered at $11 each, but neither was billed to Stintz’s expense account.)

Four days later, Abro submitted a permit application to build a massive new roof sign at 3442 Yonge — in Stintz’s ward, two blocks north of The Abbot. And on the Reimbursement of Business Meals form, Stintz (or her assistant) noted that the meeting was with regard to the upcoming sign bylaw (“re: Sign by-law”).

Les Abro, however, was not registered as a lobbyist, and so on May 26, I submitted a formal complaint to the Lobbyist Registrar.  On June 9, the complaint was officially rejected because the meeting “did not constitute lobbying” and the “Lobbying By-law therefore would not apply.”

So when is lobbying not lobbying?  When the parties involved say it isn’t. 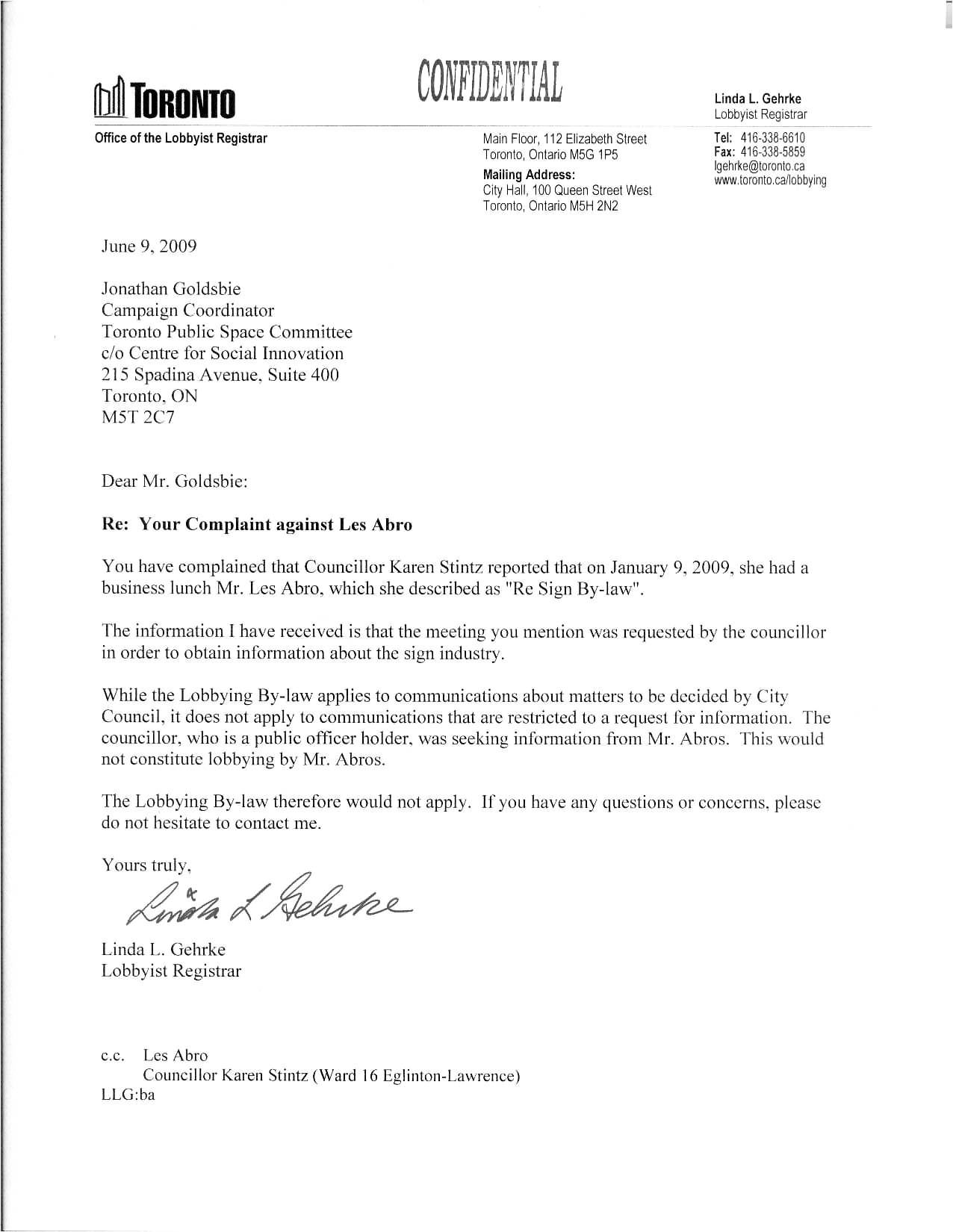 Having a business lunch with a politician to discuss an upcoming piece of legislation that has the potential to earn or cost you millions would seem to fit the very definition of lobbying.  And indeed the Lobbying By-law itself [PDF] defines the term “LOBBY” as “To communicate with a public office holder on… [the] development, introduction, passage, defeat, amendment or repeal of a by-law, bill or resolution on any matter, by Council…”

There are, however, a whole host of exemptions under the By-law’s section 140-5, the intent of which are to ensure that routine communications that are part of standard processes (making a deputation, inquiring as to the status of a permit, etc.) are not branded as lobbying, regardless of who engages in them.  This is certainly fair enough, as anyone who has dealt with City Hall on any level knows that at least one email and/or phone call to a bureaucrat or councillor’s staffer is necessary to find out just what the hell is actually happening on any given matter.

So it’s not unreasonable that “A communication that is restricted to a request for information” should be exempt.  At the same time, I am doubtful that a multi-course meal convened for the explicit purpose of chatting about a new bylaw is the sort of “communication” this sentence was authored to protect.  Especially given that — with regard to a private meeting between two individuals — it is impossible for a third party to ever disprove that a conversation was not merely a “request for information.”

(Similarly, city councillors could virtually never be found to be in violation of their own Code of Conduct respecting lobbyists [PDF, page 9], as the Integrity Commissioner would have to determine — emphasis mine — that a councillor engaged “knowingly in communications… with a person who is not registered…”) 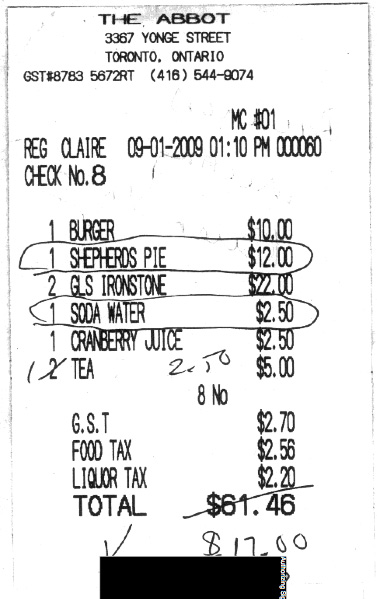 This would appear to be a fairly significant loophole in the Lobbyist Registry, as it raises the question: What is there to stop the parties to a meeting from excusing themselves from oversight by claiming that their conversation was restricted to an information request?

“If there is that kind of collusion, I would hope that that doesn’t occur,” Lobbyist Registrar Linda Gehrke tells me in an interview.  “You’re right, a meeting occurs in private.  Many meetings that lobbyists have are in private, and we rely on the honesty of public office holders as well as the lobbyists to report or seek advice.”

Would she consider this a loophole?  Not quite, but “it’s an evidentiary issue, obviously, only the parties who are there know what really happened.  That’s why we have a registry, so those types of meetings will become part of the public record.

Have there been other cases when a complaint has been dismissed because the communication was found to be an information request?  Gehrke declined to answer, citing her duty to maintain confidentiality under the City of Toronto Act.  But she did say her office has had “a number of situations when people have called us to ask for advice” on this issue. 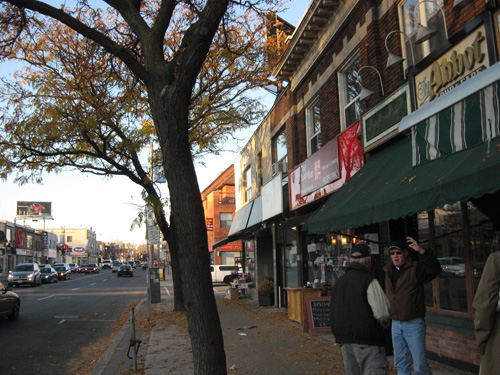 Looking north on Yonge from The Abbot.

Mr. Abro did end up registering as a lobbyist after all — on June 8, the day before  Gehrke sent her letter dismissing the complaint.

Now how did Stintz hook up with Abro in the first place?  Well, sometime in the middle of  2008, Abcon retained Sutherland & Associates as their lobbying firm, to meet with councillors and staff regarding the new sign bylaw as well as specific variance applications.  “Sutherland” is former city councillor Paul Sutherland; the “Associates” are Mary Di Mambro and Dan Bordonali, the latter of whom was Stintz’s Executive Assistant through June 2007, when he left City Hall to become a lobbyist.

On March 12, 2009, Bordonali registered to lobby various North York councillors, their staff, and the chair of the Yonge Lawrence Village BIA regarding 3442 Yonge.  Bordonali met with the BIA board on April 14  and evidently did a pretty good job pitching the project — two super-sized ad faces framed by a sculptural recreation of Charles C. Ebbets’s “Lunch atop a Skyscraper” — as the BIA ended up supporting it [PDF, last page].  One wonders, though, if Bordonali informed them that they would be the recipients of Yonge and Eglinton’s sloppy seconds. 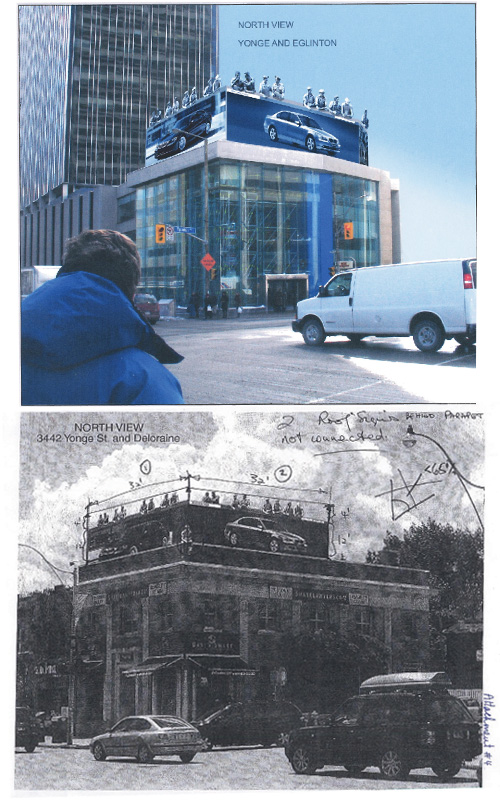 You see, the billboard at 3442 Yonge, at the southwest corner of Yonge and Deloraine, was originally supposed to be at the southwest corner of Yonge and Eglinton, in Councillor Michael Walker’s ward.  Abcon spent a nice chunk of 2007 trying to win community backing for it, and the website of the South Eglinton Rate Payers’ and Residents’ Association (SERRA) still hosts a copy of the document that Abcon was using to sell them and Walker on the unique installation [PDF].  (In it, Abro goes on at length about how perfect the structure is for the Yonge and Eglinton intersection.)  Despite attending meetings of both the SERRA and Oriole Park Association boards, Abro failed to obtain their endorsement, and never ended up applying for a permit.

A year and a half later, the City was well into crafting a new Sign Bylaw and in mid-December 2008 revealed that it was contemplating prohibiting new roof signs, calling them “intrusions into [the] skyline” that “dominate and overwhelm buildings.”  The City also hinted at an overhaul of the variance process, to take decision-making power away from community councils (which generally go along with whatever a local councillor wants).  So if Abro was ever gonna build his sign, he had to act fast, and thus he tried again, two miles north and in the ward of his new lobbyist’s ex-boss.

On January 9, Abro met with Stintz, and on January 13 his company applied for the permit to build the sign at 3442 Yonge.  It’s a pretty transparent case of “variance shopping,” where a billboard company tries to build a sign in one jurisdiction, encounters resistance, and then just moves it over to the ward of a more billboard-friendly councillor. 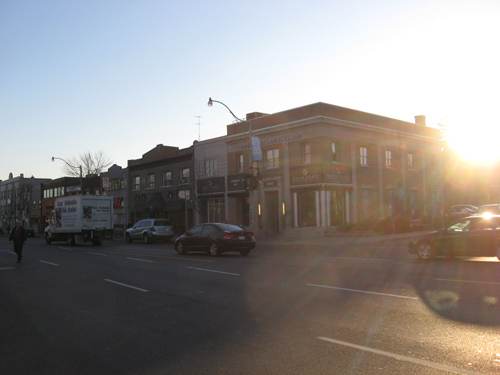 In this case, it worked.  Despite City staff recommending refusal [PDF], Stintz was able to collect enough votes at last week’s meeting of the North York Community Council in order to grant Abcon their variance.

This is how billboards in Toronto get built.