As soon as I entered the Toronto Congress Centre, my friends pulled me into the lineup they were standing in.

“We don’t know.  We just got here and were told to stand in this line.”

I poked my head out to get a view of the front. “Oh my God,” I exclaimed, “This is the line to shake Rob Ford’s hand! He’s shaking the hand of every person who goes in!”

As a politically-engaged downtowner attending a massive Rob Ford shindig out of a healthy mix of curiosity and irony, this was a bit intimidating. (Also, that morning I had written something that questioned the legality of several aspects of his campaign.)  But Ford is, of course, a nice enough guy in person, and you have to respect his sincerity.  His attitude isn’t restricted to quasi-libertarian populism, after all; he also has an evangelical belief in the power of personable customer service, and his introductory handshake was followed by several additional phalanxes of Walmart-like greeters along the way into the main room. (Plus, he didn’t recognize me.) 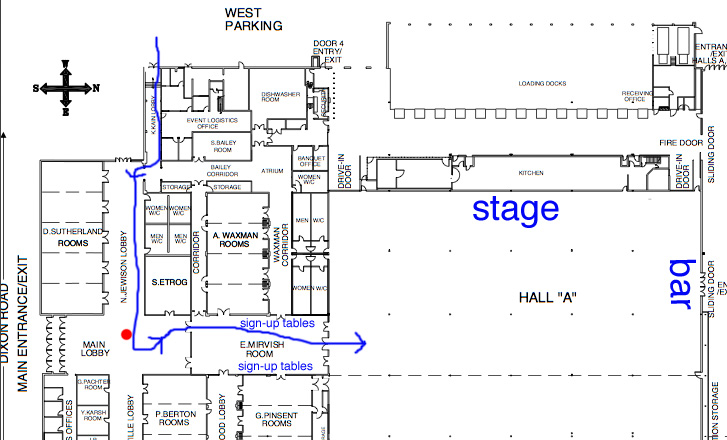 A rough layout of the event.  The red dot is a hand-shaking Ford. (Click for larger.)

The efficiency with which 1600 people were processed with a smile was terrifying.  Shake Ford’s hand.  Head into next chamber.  Shake campaign volunteer’s hand.  Here are two drink tickets. Head to a table.

This vestibule was lined with sign-up tables on either side, taking names, pledges to help out, donate., etc.  Volunteers were enthusiastically distributing FORD-branded signs, visors, bumper stickers. By virtue of the intelligent layout, I would guess they recruited an army of no fewer than a thousand people that night, prior to any of them even entering the grand hall, which itself was set up as though for an epic bar mitzvah. 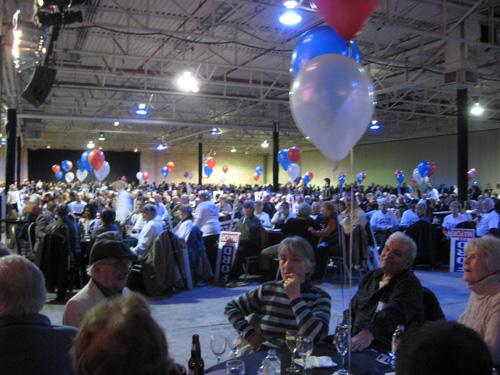 The north half of the hall.  I could have spun around 180º and taken an identical photo of the south half.

Glazed in blue light and populated with a hundred tables decked with red-white-and-blue balloons, the bar was cleverly placed at the far, far end.  As were the cheese tables, generously offering brie in units best described as “slabs.” No expense was spared: there were olives with AND without pimentos.

Then an accordionist on stage, presumably to complement the wine and cheese.  The accordionist was followed, as all accordionists should be, by Councillor Frances Nunziata (the diminutive former mayor of York) who offered what will likely be the only endorsement Ford receives from a fellow member of Council.  A disproportionately diverse selection of supporters stood guard as a human backdrop.

The heartfelt testimonies from high school football players to whom Ford has provided personal guidance was sweetly touching, both effective at sketching him out as a caring human being and saving me from ever having to see The Blind Side.

Continuing the bar mitzvah theme, campaign manager / older brother Doug Ford, introduced a video tribute the family had assembled, which Rob had not yet seen. It was scored to an original rock song with lyrics about his fiscal policies, and my brain melted much as it does in the presence of the best of Hungarian art cinema. Please put this on YouTube.

I was further staggered by the heartbreaking genius of having a bagpiper lead the parade that was Rob Ford’s dramatic entrance. Nothing he might say in his speech could possibly have topped that, and indeed nothing did: that anyone could have such a shallow understanding of how government works after spending a whole decade within it is actually quite disappointing.  That he doesn’t grasp the paradox inherent in promising both fewer city councillors as well as improved constituent relations from councillors does not give me faith that during this campaign he will disclose some heretofore hidden intelligence. (He also quite literally proposed shouting-match democracy; a Council led by Mayor Ford, he promised, would decide on issues based on whichever members of the public are loudest in the Council Chambers.) 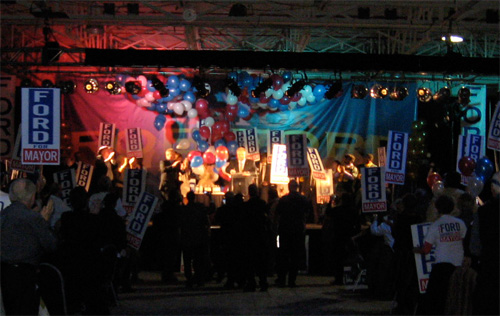 At the conclusion of the speech, scores of balloons were released to fall to the stage below.  Many of them popped on impact, suggesting they were inflated to an excessive degree.

The song playing — Starship’s “We Built This City.”