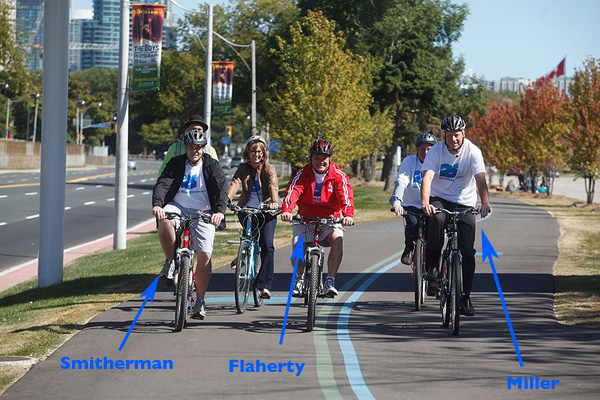 At his Transportation Policy Launch / $250-a-plate fundraiser on Friday, George Smitherman delivered a 3251-word speech.  (I’m going by his official “speaking notes,” to which he stuck very, very close.)  After 1059 words of introduction, he addressed the following topics, in order:

• Expansion of public transit (including a broadly-sketched financial rationale): 1383 words

Not necessarily an unreasonable ratio, but enough to make clear that everything other than public transit is an afterthought in the context of Smitherman’s “Integrated Transportation Plan.”  (The “backgrounder” distributed to media — and posted online here — is actually more interesting than the speech itself, and also has a section concerning what Smitherman would do for pedestrians.)

John Lorinc, Steve Munro, and just about everyone else (including me!) have already written extensively about the transit stuff, so let’s now take a look at the 170 words about cycling initiatives:

“As an advocate of an integrated transportation approach, I believe we must also introduce a coordinated roads policy – including a balanced cycling policy.”

This earned some applause from the 1200-person audience.  Not as much as his earlier statement that “My Transit Delivered Plan does not depend on road tolls or congestion charges of any form,” but an encouraging amount nonetheless.

“What greater indication can there be of City Hall’s leadership failures than to realize that Toronto can be distracted so deeply by a debate about where to put bike lanes? It drives me up the wall.”

Good, good. If I hadn’t been furiously tweeting, I would have been nodding in approval.

“So here’s what I will do. If I am elected Mayor, there will be an immediate adjustment in our cycling priorities. We will take a time out on new bike lanes but we will move swiftly to ensure that current cycling routes are made safer and are better maintained.”

No applause for this one.  Even before a crowd that’s far better healed than the average person, proclaiming a moratorium on new bike lanes — even if it means rededicating resources to current lanes — does not seem to be a popular position.  There’s no doubt that many roads are in terrible condition and that cyclists suffer from this at least as much as motorists do, but this is just a convenient excuse to avoid the sadly divisive debates about new lanes.  Sidestepping the subject is a different kind of “leadership failure.”

Sherbourne’s patchy paving, for example, makes it a brutal street to ride on, despite its bike lanes.  This is a key reason I’m grateful that accommodations for cyclists are being integrated into the reconstruction of Jarvis, three blocks over.  Painting new lanes and improving the conditions of existing ones are hardly mutually exclusive strategies and priorities.  While there’s something to be said for a “quality over quantity” argument, such “quality” is more about filling in and completing the current network than it is just about simple upkeep.

“Moving forward, we will focus on curbing bike lanes to create physical separation of cycling areas from drivers.”

Much cheering! Impressive! I wonder if the people in attendance were similarly enthusiastic about the City’s University Avenue proposal. Oh, but!  Smitherman clarified in the press conference afterward that these curbed bike lanes would not be new ones but rather existing lanes to which a curb would be added.  So presumably no University Ave.  Asked by several reporters to cite examples of current lanes where this modification might be appropriate, Smitherman failed to name a single one.  And Steve Munro pointed out the “duh” factor: curbing many, if not most, existing lanes would significantly screw over street parking.  Maybe that’s not such a bad thing (we could all stand to be doored less), but no real consideration has been given to the fact that this would not be any more politically “safe” than building new lanes.

There’d be no new money for this, either.  The cash would come from the current capital budget set aside for constructing bike lanes.

“We will expedite the expansion of dedicated bike paths with an emphasis on so-called ‘expressways’ through parks, ravines and hydro-corridors. We will urge strict enforcement of traffic laws. And we will improve opportunities for our kids to learn bicycle safety and the rules of the road.”

Well, more power to you, I suppose.  And more power would be needed, as the City of Toronto is — for better and worse — legally prohibited from giving direction to the Toronto Police as to how they should or shouldn’t go about enforcing the law.  They can nag them, sure, and sometimes it helps, but it’s unclear exactly what it means when a candidate promises he will “urge” the police to do something they should probably be doing anyway.  Similarly, Toronto Hydro isn’t all that keen on loaning out its corridors, though the City likely has a bit more room to negotiate with them than they do with the police.

As for the “expressways” through parks and ravines, well, I anxiously await a map.  Hopefully it will be more concretely plausible than the one Smitherman drafted for transit.

Photo from the Waterfront Toronto Flickr stream, with the other stuff added by moi.