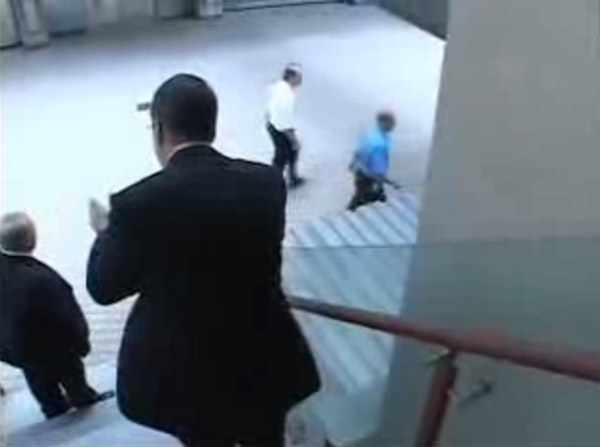 City spokesperson Brad Ross (now with the TTC) pleads with Rob Ford to give up his chase after Globe columnist John Barber.

On Tuesday, March 11, 2008, the anonymous Ceyla16 uploaded the video “Councillor Rob Ford in action” to YouTube.  Originally devoid of any contextual information, it sat there for two and a half weeks before being discovered by Toronto Life‘s short-lived Preville on Politics blog.  Two days later, it was posted here.  And then a day after that, I tracked down both its origin (the documentary Hogtown: The Politics of Policing) as well as the specifics of the argument at its centre (the details of the in camera Police Board vote on whether to renew then–Chief Julian Fantino’s contract).

In the course of my digging, I also uncovered the identity of the user who posted the clip on YouTube and emailed him to ask if there was any particular reason he put it online; at this point, my Torontoist piece had already gone up, and I was just considering adding an update.  The fellow did in fact get back to me the next day, but I never got around to appending his explanation, and then kind of forgot about it. (I also later learned that the person I referred to as “Unidentified reporter” was in fact the Star‘s Catherine Porter.)

But as the clip has not only gotten renewed play in recent months but has also inspired a sitcom, I’ve found myself wanting to tell the last little bit of the story, which in turn resurrects another long-past Ford controversy:

I posted the clip on behalf of my friend [, Hogtown director] Min Sook Lee, that was the primary reason. but I also wanted to put more out about Councillor Ford in light of his “Orientals” comment. I’m originally from the San Francisco Bay Area and find it incredibly hard to believe that a goon like Ford who tries to pass his hate off as ignorance and skirts issues when he’s under fire can be an elected official (then again the US has the ultimate in GWBush). I’ve observed that Ford has a reputation for being outrageous but it’s dangerous if that becomes accepted— especially out of an elected official, I’d like to think that in Toronto we’d have higher standards. Furthermore, after his “apology” yesterday it’s clear this guy doesn’t get it and it’s because he doesn’t think he has to be accountable and that’s scary.

So, thanks to Smitherman and Dieter D-H, everyone remembers the AIDS remarks, but who remembers the details of Ford’s “Orientals” remarks?  Raise your hands. 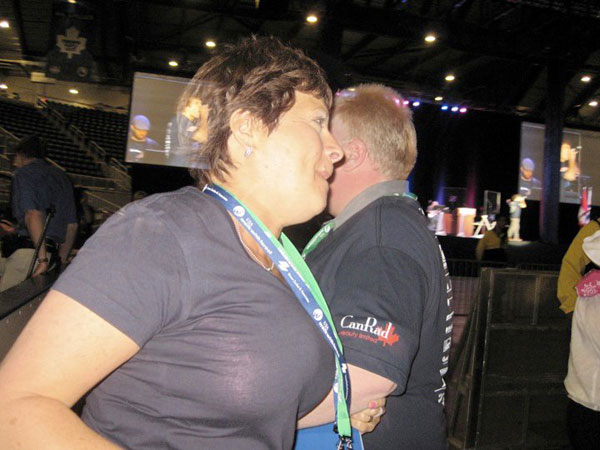 Rob Ford gets along with some City Hall columnists better than others.

On Wednesday, March 5, 2008, City Council was debating the perennial subject of holiday shopping.  Ford was of the opinion that the concepts of holidays and rest are a competitive disadvantage in a globalized world.  The National Post transcribed his comments thus:

Go to the Orient. Go to Hong Kong. I’ve been there. You want to see workaholics? Those Oriental people work like dogs. They work their hearts out. They sleep beside their machines. That’s why they’re successful in life…. Oriental people, they’re slowly taking over. There’s no excuses for [them]. They’re hard, hard workers.

The Globe noted he added, “This is capitalism, ladies and gentlemen. … This is what we need.”

Mayor Miller, who wasn’t present at the time, soon after demanded Ford apologize on the floor of Council at the next meeting.  Ford refused, and insisted his remarks were intended as a compliment; he was genuinely perplexed as to why people might be offended.  Ford is not so much malicious, you see, as he is unfathomably ignorant, and seemingly lacking the capacity to possess empathy for people he has not directly met in person.

The next day, he clarified to the Star “that by ‘taking over’ he meant Asians are further advanced in business than a century ago.” But although he bristled at the suggestion of a public apology, he told the Post that same day that he was open to saying sorry to individual Asian Canadians who were hurt.

And further down in the Post‘s article (written by Kelly Grant, now the Globe‘s City Hall bureau chief) we see the genesis of his mayoral ambitions:

Yesterday, Mr. Ford showed off a stack of e-mails from supporters calling his Oriental speech harmless. Several of the messages entreated Mr. Ford to run for mayor.

“People have asked me, a ton of people have,” said the Etobicoke councillor, who earlier mused about running for the top job before his inebriated turn at the Leafs’ game in 2006.

If Mr. Ford does run, speeches such as the one he made this week could hurt his chances, some councillors said.

“Anybody could run for mayor, but as long as he makes this kind of remark, his chance of getting elected mayor is very slim,” said Raymond Cho, a Scarborough councillor originally from Korea. 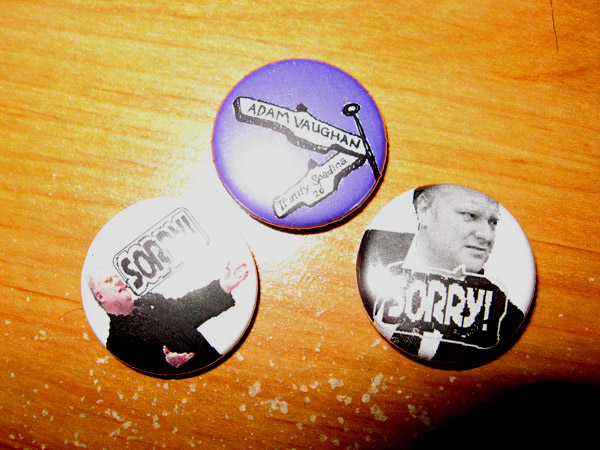 But the shit really hit the fan for Ford the following week, when on March 14th, ten Asian Canadians protested outside his office by lying on the floor next to a prop sewing machine.  The group, led by Kristyn Wong-Tam — a previous president of the Chinese Canadian National Council Toronto Chapter — demanded a public apology.  (Wong-Tam is currently the Adam Vaughan–backed candidate in the ward 27 race to replace Kyle Rae.)

Ford wasn’t in his office that day, but by this time, he had more or less clued in that he’d done something wrong — even if he didn’t fully grasp what that was.  “I have publicly apologized to the newspapers, on the radio,” he told the Globe.  “I will publicly apologize to you if I have offended anybody by my comment.  I did not know [the word] Oriental was a racist word and I did not know [the phrase] working like a dog was a derogatory statement.”

The next Council meeting was Monday, March 31st, and came less than a week after Ford was charged with assault and uttering death threats in a dispute with his wife.  (The charges were dropped two months later.)

There were dueling petitions submitted to the City Clerk: on one side was Adam Vaughan, with 260 signatures calling for an apology from Ford.  On the other was Ford himself, with 151 of something.  The Star and Globe said he had a 151-name petition from the Asian community asking that he not apologize; the official meeting minutes, on the other hand, recorded it as “151 e-mail communications he had received from individuals, expressing their support” [PDF, page 3]. 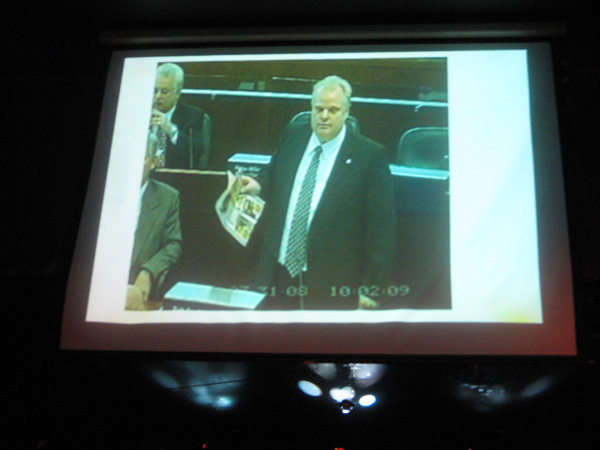 Not only did Ford maintain that “Asian people do work very hard, and are very, very aggressive,” he also produced a No Frills flyer advertising “Oriental flavour 100% pure cornstarch.” Oh yes he did. (If I had been his adviser, I would also have suggested he brandish the sheet music for “A Hard Day’s Night,” in order to justify his use of “working like a dog.”)

Let’s go to the minutes for the subsequent comedy: 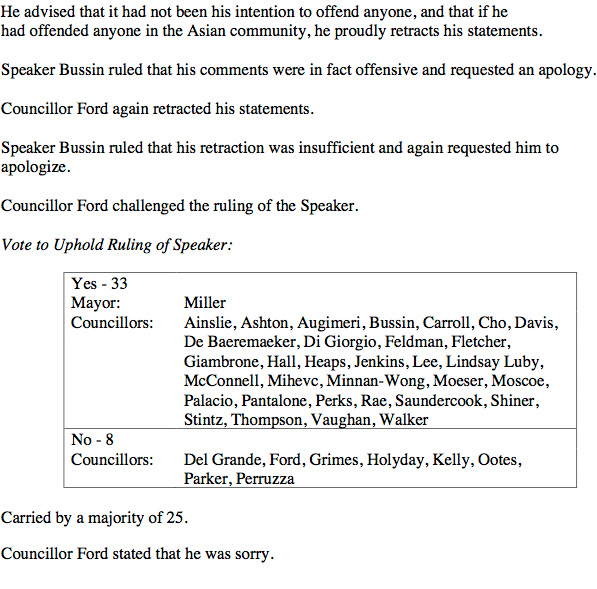 Peter Kuitenbrouwer described: “…Mr. Ford stood up and, in the manner of a schoolkid whose teacher has ordered him to say something he does not believe, he said, in a tiny voice: ‘Sorry.'”