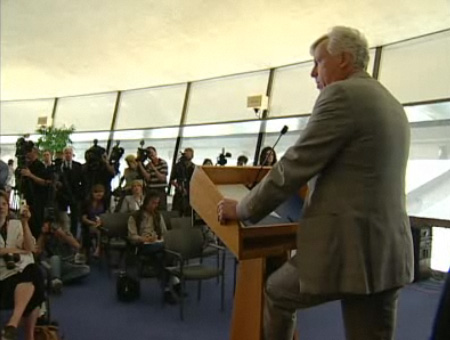 “The Toronto Police Service, with very little lead time, I think did a job that can only be described as extremely professional and to the highest standards.” (Near-complete press conference video: part 1, part 2.)

Toronto’s civic leadership has failed.  The inability of our representatives to utter anything helpful, comforting, or non-bullshitty during or after one of the bleakest weekends in this city’s history is nothing short of a travesty. If the public’s faith in democracy was damaged by the mass arrests, detentions, and beatings of peaceful protesters, journalists, and random pedestrians, then it was positively slaughtered by our politicians’ indifference to these things.

The Police Services Act prohibits elected officials from directing the activities of a police force; this is absolutely fine, and is exactly as it should be. But I am hugely doubtful that it is the intention of the Act to muzzle politicians and prevent them from addressing their constituents in a time of crisis.

That said, when a handful of our leaders finally emerged to talk to the media on Monday morning, I kind of wished they’d stayed in their burrow. Mayor David Miller’s own press conference was dismissive at best, delusional at worst. Early in his remarks, he encouraged people to attend the upcoming Tall Ships festival at Harbourfront. Twice. This was not an effective diversion technique.

He admonished mayoral candidates who would choose to address the incidents of this past weekend — “People running for elected office should not be speaking up” — bringing to mind Kim Campbell’s infamous declaration that an election is no time to discuss serious issues.  (Later that day, Joe Pantalone put out a post-G20 release that heeded the mayor’s warning and was appropriately oblivious; by Tuesday afternoon, the campaign realized its error and issued a new release saying all of the things that the previous one should have.)

“I don’t think we should second-guess police decisions made in the heat of the moment,” Miller proclaimed, implying that any errors would be justifiable and forgivable, if only we knew everything there was to know. In other words, those who are not omniscient should shut the f— up.

When the Globe‘s Marcus Gee asked him a question about the front-page editorial in Monday’s Star, Miller exuberantly proclaimed that he does not subscribe to that paper. Fine, there are legitimate reasons not to subscribe to the Star, but the comment was so odd, so out of nowhere, and so needlessly antagonizing that I started to wonder what the hell he was thinking. Why bother holding a press conference if you plan on only responding to questions with varying degrees of contempt?

With regard to the Queen and Spadina incident, he took no issue with the police’s decision to hold 200 people (many of whom were journalists, and the vast majority of whom were random pedestrians) outside in the cold rain for several hours, because the police believed there may have been some potentially destructive folks in their midst. A mayor who prides himself on his public realm policies effectively condoned the criminalization of pedestrianism.

“Let’s put what happened over the weekend behind us,” he concluded.

David Miller had originally hoped to be remembered as the “Transit Mayor.” After the provincial government threw the future of Transit City into doubt, he was willing to settle for the “Green Mayor.” But at this point, and even among those who previously supported him, I am afraid he may be recalled as the “Spineless Mayor.”