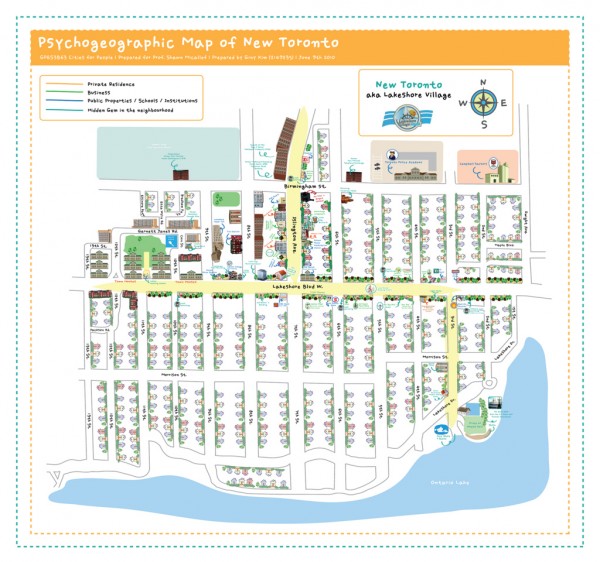 This is part of a series of posts by students in OCAD’s Cities for People summer workshop (click the link to read a bit about what the class is about). This post is a follow up to Giny Kim’s first post exploring New Toronto. This is her proposed design for the area.

For the last 6 weeks, I’ve researched and observed New Toronto, interviewed people and learned the history of this old neighbourhood. My final task was to come up with an intervention that might help revitalizing the neighbourhood.

While I was observing and interviewing the neighbourhood and the people living in it, I noticed that several people who once lived in this neighbourhood have moved to another neighbourhood. Compared to the past, when New Toronto was active with several well known industries offering jobs to people, the neighbourhood seems a bit empty and quiet.

During the interview with John Schaffer, the chair of B.I.A. of Lakeshore Village, he suggested that New Toronto required more density in order to be revitalized.

In New Toronto, there is contrast to the condition (environment) of some of the living areas. The newly developed town house area is in good condition for people to live and feel safe, but some of the old apartments and undeveloped areas are in poor condition and safety. This might be one of the reasons for less density in the neighbourhood.

Before I decided what kind of design intervention I was going to suggest for this neighbourhood, I’ve gone through critical thinking process of currently available resources and advantages of the neighbourhood to prevent overlap and to come up with the most needed design development this neighbourhood requires.

The suggested design idea can be built on the north side of Birmingham st. & 8th St. I’ve come up with a design suggestion to built an affordable living area (space) with safe entertaining and resting areas by reusing vacant land and the empty\old building there (a former hydro building).

The Shape of the building is inspired by the idea of waves in the lake emphasizing the characteristics and the new name of the neighbourhood: Lakeshore Village. The building is built in strawbale with a green roof on the top of the building to keep it cool in summer and warm in winter. The top roof also provides nice walking path for people. Below is a scene from the roof top. If the slope of the walk path is too steep, the top wave shapes can be redesigned to have less steepness and have stairways instead, as the following diagram shows. The empty land can be now used as a park. There may be toxins remaining in the land from the previous industries. By installing plants and trees, the toxins can be absorbed, biodegraded by the microorganisms and become nutrients for the plants and the toxicated land can be healed in some way. A scene from the park walk path: The old hydro building can be reused as an education center or library. The roof can be replaced with a sheet of thermo-glass to provide natural lighting for students and people reading and studying.