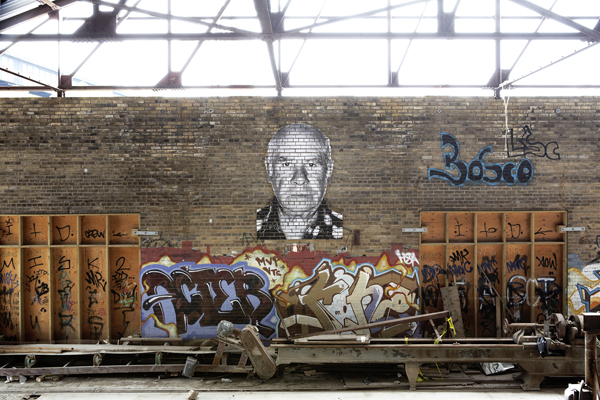 The Brick Works have been acknowledged by photographers, urban explorers, graffiti artists, homeless people, and underground events promoters as the perfect place to do… just about anything. The long-unoccupied Kiln Buildings are now covered from wall-to-wall, kiln-to-kiln with so many pieces of artwork that Evergreen, the group restoring the entire Brick Works facility, considers the graffiti a representation of its history – the abandoned years.

As part of the plan to keep the Kiln Buildings as original as possible, at least 70% of the graffiti art is going to stay. But they’ve added another element to the long spray-painted walls – sticker portraits. Dan Bergeron was contacted by Diaspora Dialogues, a company that has done many art installations in buildings around the city (including at Union Station for Doors Open Toronto in 2009), and wanted to do something to the Brick Works that represented its history.

Bergeron considered the proposal for a while and discarded their idea of archival images of the quarry and building in favour of a concept that is familiar to him. Bergeron has done mass scale portraits around Toronto, such as his Regent Park Portrait Project, and decided to photograph some of the living employees of the Kilns. Those who traversed the Brick Works during Doors Open this year may have already seen the larger-than-life portraits created by Bergeron and an assistant. The faces of the six men, portrayed high up on the walls, represent not only the people who worked in the kilns, toiling away in front of 2,000 degree Fahrenheit fires, but the history of Toronto’s structures. “They built the city,” Bergeron said, and he wanted to pay homage to them. 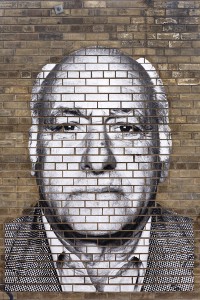 Using his unique street art technique of enlarging and printing his own photographs, Bergeron spent about six hours on each portrait, cutting the sizes of the stickers to fit each individual brick, cutting away spaces for the mortar between them, adhering them to the bricks using a technique called wheat-pasting, and paying close attention to making sure the eyes lined up and remained the focus of each portrait.

Besides Bergeron’s installation and the graffiti that adorns the walls of the kilns, Evergreen has plans for multiple art installations that will emphasize their mission of raising awareness and perception about the environment and sustainability.

No 9 gallery is preparing four installations that will be on display at the inauguration of the restored Brick Works building in September. The exhibit is called Four Directions and will showcase the work of four artists with different social and environmental issues, on display in the drying kilns. The exhibits will allow viewers to become immersed in various environmental issues with the use of audio and video.

The facility beside the Kilns Buildings has had the roof removed to make way for a winter skating rink, under foliage that will eventually grow and create a gazebo-type atmosphere. There will be plenty of “discovery gardens,” at least 16 mounds to the North of the café and farm store, aimed at educating gardening techniques and the use of native plants.

To the North of the discovery gardens, there will be a watershed map. Approximately 200 lakes and rivers have been buried by an ever-growing Toronto. This map will show where some of these rivers are, and will have an interactive component for children to learn about the watershed itself. At the North end of the Kilns building there will also be a rock-climbing wall created and organized by Outward Bound. 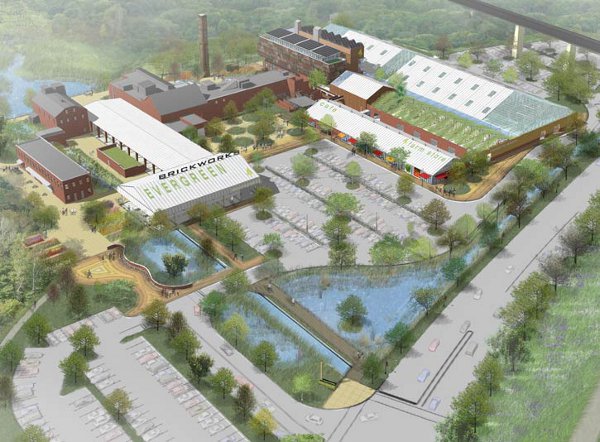 Teaching and education are core functions for Evergreen, and the Brick Works revitalization project encompasses these goals. Inside the only new building on the site, built to LEED standards, there will be room for offices at the Centre for Urban Sustainability as well as classrooms geared towards workshops for children. Evergreen has been working with teachers from the Toronto Distric School Board to create programs and garner interest in their facilities in the hopes of becoming a destination for schools and other groups.

There will be many places throughout the grounds where kids can learn about the environment and sustainability, and the outdoor play area will “teach children without the kids ever realizing they are learning,” says Evergreen’s communications director Anthony Westenberg. Their responsible building methods even garnered them an acknowledgment in the National Geographic Traveler as one of the worlds top 10 sustainable destinations, and according to Westenberg, the project is being used as an example for the Livable Cities awards. “We’re hoping that there’s going to be a ripple effect,” says Westenberg of how he hopes they can be inspiration for sustainable building.

In the future, Westenberg and Evergreen expect that the Kilns buildings will be an attractive place to hold events, whether they are wedding receptions, political parties, or art exhibits. But for now, the Kilns Buildings are closed to the public while they make it safe and add more lighting, but the grand opening of the Brick Works buildings and site will be the weekend of Sept. 24-26.