Toronto’s second waterfront beach officially opened Monday morning with all three levels of government in attendance to celebrate the cooperation that resulted in a project that came in on-time and on-budget.

Canada’s Sugar Beach, named so because of the $14 million in tax dollars that went into the project and it’s location to the east of the Redpath sugar factory, is filled with Muskoka chairs, pink beach umbrellas, red and white striped rocks, and white sand from Ohio.

The park has been open and in use for a few weeks, with families lazily watching sailboats and the lunchtime crowd catching some sun before heading back to the office. The view of the water is quite nice, but the area around the beach is too contaminated for swimming. To give beach-goers some water they can play in, there is a maple leaf shaped water feature that is reminiscent of the Dundas Square fountains that shoot water out of the pavement. In keeping with the Canadian theme, the fountain is shaped like a maple leaf, and leaves are made of granite slabs throughout the neighbouring pathway and promenade. 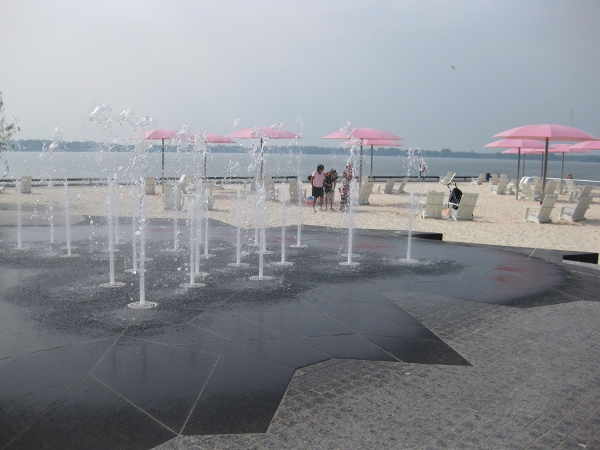 Waterfront Toronto design contest winner and Sugar Beach designer, Claude Cormier, worked together with DTAH – the company that designed the Spadina wavedeck, as well as many other projects with Waterfront Toronto – to create a unified public space that would engage people to come down to the waterfront. The Water’s Edge Promenade component of the project, created by DTAH, includes black and gray cobblestones, benches and maple trees designed as an urban boardwalk without the actual boards. Since this whole project, from derelict parking lot to manicured beach, only took nine months, one can assume that the completion of the promenade to Parliament Street will be done in the near future.

Urban beaches are nothing new to Toronto, with HTO Park opening three years ago. Many of the features used in HTO are re-used in Sugar Beach: the umbrellas are the same, with the obvious colour change, and both boast real sand. Sugar Beach, however, doesn’t have the pleasant view of the city that HTO has. In a more secluded area – that had been restricted to public access for many years – Sugar Beach may take slightly longer to become a hit than HTO Park. The entrance is currently hidden behind construction poles and lacks a proper sidewalk on the south side Queens Quay. There are many nearby developments still in a state of construction, such as the new George Brown school of Health Sciences building.

The City of Toronto and Waterfront Toronto are following in the footsteps of major cities across the world were urban beaches have become part of summer in the city. There is the Oak Street Beach in Chicago,where the sands edge meets the waters edge and people can swim. The Paris-Plage closes down roadways along the river Siene throughout the summer and fills the streets with sand, palm trees and beach chairs. Toronto’s new urban beach, as mentioned in an article by Christopher Hume, is the perfect mix of industrial and pleasure — where one can view the intricacies of a factory that uses ocean liners to unload product.

In the process of making Toronto a destination for travellers, it’s giving Torontonians who can’t get away from the city a chance to soak in some rays and dig their feet in the sand. 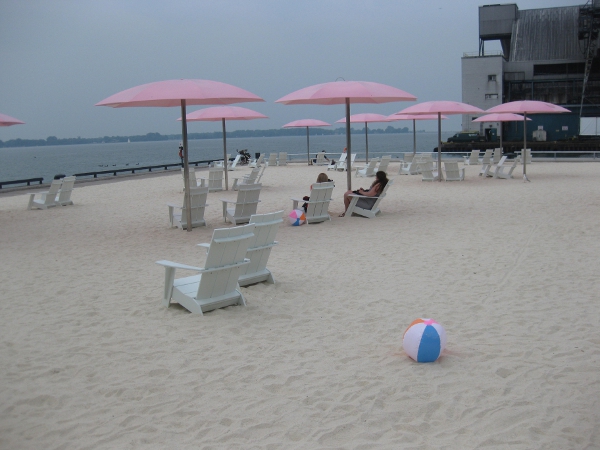