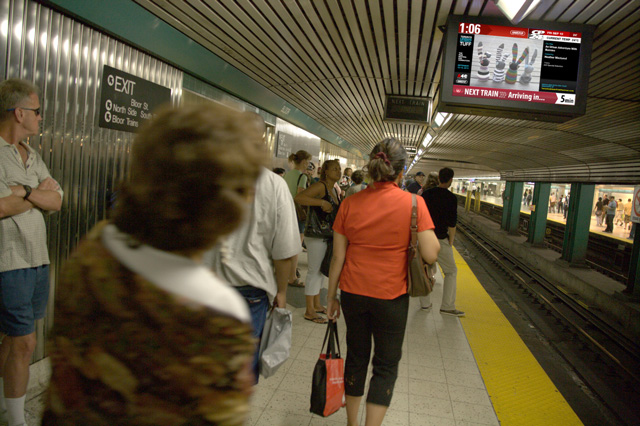 The 80 finalist videos in the Toronto Urban Film Festival (TUFF) are now running on OneStop screens across TTC platforms, and on the TUFF website.

The director of TUFF, Sharon Switzer, says that this is what public art should do. “It’s bringing work to the people so they don’t have to go find it,” she says. “Surprising them, entertaining them and educating them.” Running concurrently with the Toronto International Film Festival, TUFF aims to make the short-listed shorts more accessible than an hours-long lineups in front of theatres across the city.

Switzer pre-screened the 355 submissions so that each film could be placed in one of the seven categories assigned to a juror. Then, each juror had to choose the top ten from the 50 or so they were given that would play on the OneStop screens. Top picks have already been chosen, and the seven categories have each been assigned specific days.

Starting today and continuing until September 17, TTC subway platforms screens will display a TUFF entrant video once every 10 minutes from the category for the day (which can be viewed here). Viewers interested in seeing the films back-to-back can go to TUFF-specific stations at Yonge-Bloor, St. Andrew and Dundas stations. At Bloor station, you could add 10 minutes to your commute, the same as about four trains passing you by during rush hour, to enjoy the full selection of the day’s videos. Votes are being tabulated on the TUFF website for the Viewers’ Choice winners, which will be played throughout the day Saturday, September18. The award winners will be played all day Sunday and Monday, September 19 and 20.

Switzer chose the jurors, and the guest judge, award-winning flimmaker Deepa Mehta, based on their experience, and assigned categories based on each juror’s expertise. Starting off the festival will be the Urban Encounters and Other Stories category, juried by curator Haema Sivanesan. Director of programming for Planet in Focus, Kathleen Mullen, is overseeing the Our Environment and Urban Growth category which will take to the screens on Saturday. The conceptual category The Medium is the Message, which was juried by filmmaker and curator Chris Gehman, will show on Sunday. Filmmaker Min Sook Lee was assigned the Urban Ideas and Politics category which will play on Monday. Urban Journeys, looking at travelling through our city and exploring, will be shown throughout the day on Tuesday and was juried by the director of Public Exhibitions at Mercer Union, Sarah Robayo Sheridan. York University professor Michael Zrd took on the City is a Poem category, which will air on Wednesday. On Thursday, videos from The Emotional City, and the last of the juried categories, will be screened, juried by filmmaker Jorge Lazano.

Closing off the festival will be videos from the Trinity Square Pitch Awards and Art for Commuters specials. This category was created for amateur filmmakers who produced a pitch to Trinity Square Video selected and given support in some funding and supplies needed to create their dream short.

OneStop Media has been very generous in their art on the screens projects, says Switzer, who used to work independently to create these kinds of public art programs and was recently given a spot on staff at OneStop to do this full-time. One minute out of every ten is more generous than other media companies have been in the past, she says. Not to mention that three of their subway screens are all TUFF, all the time. In partnership with Art for Commuters, TUFF aims at making film accessible to everyone and making an otherwise dreary and ad-filled commute a little more exciting.

An awards ceremony and closing party in the Drake’s underground space will be held on Saturday, Sept. 18, from 6:00 pm to 10:00 pm as a way to create community in this otherwise face-less festival.

Spacing is a proud media sponsor of TUFF