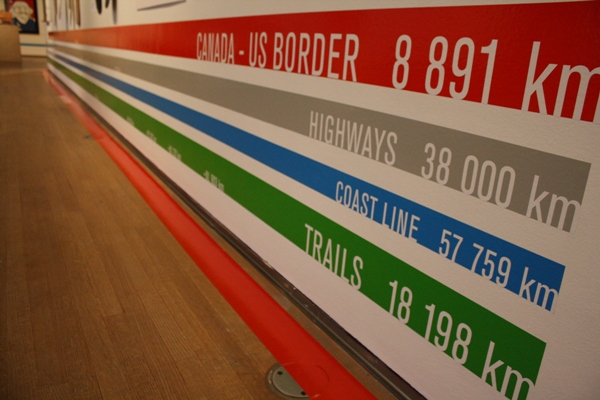 What if you could experience statistics and graphs spatially? I mean, really climb inside a well-made graphic chart and walk its clear proportions? It’s a question that Ms. Frizzle could have asked of the adventurous children of The Magic School Bus, and it’s a question that is explored with similar playfulness by the Department of Unusual Certainties (Brendan Cormier, Christopher Pandalfi and Simon Rabyniuk, currently Spacing Magazine contributors) in their first collaboration as innovators-in-residence at the Design Exchange. Play>Nation, the new exhibition on the 3rd Floor of the DX covers a great topic – exploring how geography is linked to the Canadian identity by playing with landscape, with history and with the symbols of Canadian outdoor culture. The Play>Nation curatorial team (Noa Bronstein, AnneMarie Minardi, Mark Scheibmayr and Katie Weber, with the DX Graphic Designer, Lisa Zych) is particularly interested in how it came to be that so many Canadian designers of outdoor recreation gear have attained world-class status. Chock full of iconic and innovative Canadian outdoors design, the items on display by themselves would be worth a look, but the DoUC’s contribution to the exhibition design makes the show a truly exciting place to take a spatial frolic.

DoUC created the “Play>Nation Playground” by working with scale and proportion, putting into practice the exhibition’s theme of physicality in order to trigger the deeper level of understanding that comes from a body’s experience of a space. The DoUC’s first step was to shrink Canada’s massive territory to fit the floor area of the 3rd floor DX gallery, running a bright red strip of vinyl around the edge of the gallery floor with ‘Canada 9 984 670 km2’ showing at intervals. DoUC then used more brightly coloured vinyl-strip rectangles to measure out the total percentages of Canada’s territory taken up by each of the country’s geographic outdoor play sites: “Fresh Water” (with sub-rectangles to show the total area of major lakes and of the Great Lakes), “Glacial Ice Cover” and “Main Land”, the ten biggest “Urban Areas”, “Low Arctic Tundra” and “Forest”. Each block of floor space is shown in true proportion to the size of the country itself, or the total area of the gallery floor. 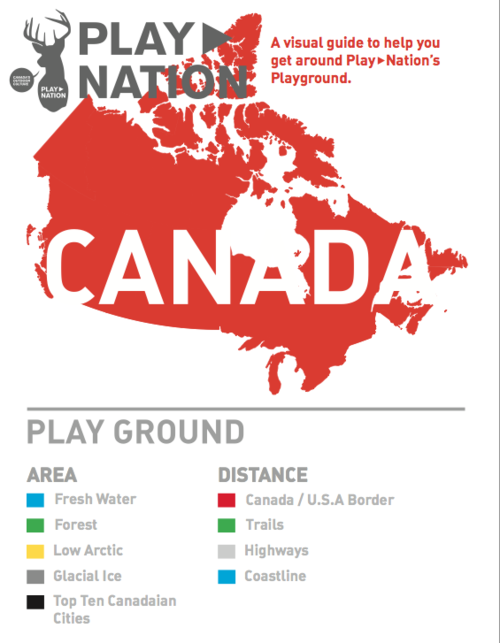 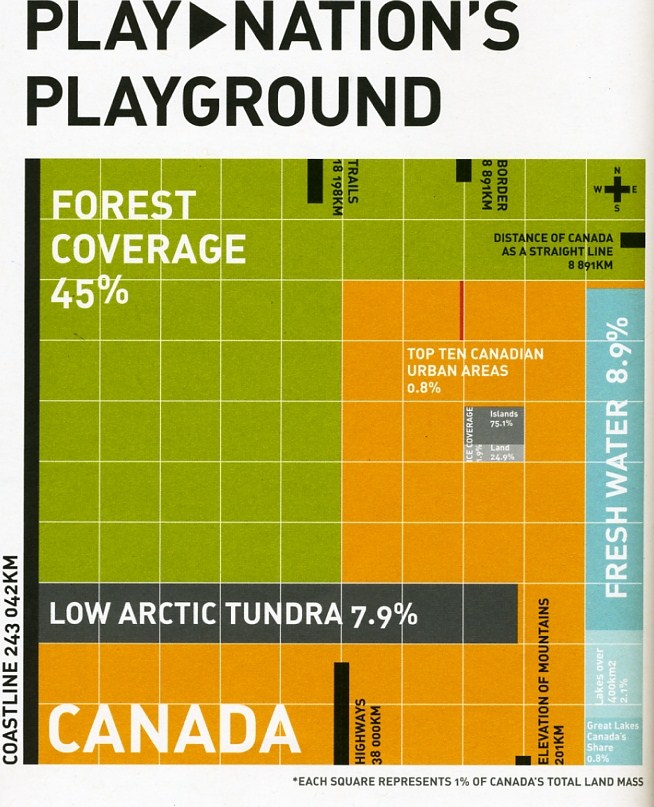 The result is that the difference that size makes becomes apparent.  Geography on a national scale begins to be experienced like, well, your own back yard (except more fun and in vivid technicolour). A visitor to the exhibit walks around, and after a bit, starts to internalize that the city and space all around them – the huge urban grid of Toronto – is literally as big as a foot’s print in this shrunken man-made country-place. To make it even more of an immersive spatial experience, DoUC represents measurements of length on the lower section of the gallery’s walls. Four parallel horizontal bars unfurl at the wall on the right hand side of the gallery entrance, simultaneously travelling the total scaled-down distance of the east and west “Coastline”, the nation’s “Trails”, “Highways”, and the “Canada-U.S.A. Border”. Highway and trail segments are labeled further by the total length contained within each province. It’s all like walking through a giant pop-up ‘resources’ page in an atlas, but with the bonus of getting to see historical, iconic and innovative design for the outdoors in this strangely abstract but physical environment.

The DoUC’s “Playground” design is integrated into the exhibit through the curators’ choice of where to place displays – there’s some riffing on spatial representation with canoes in the ‘Fresh Water’ portion of the floor – and through the way that the abstract squares and bands of bright vinyl echo the iconic Hudson’s Bay Company point blankets, on display in the “Shared Symbols, Values and Culture” section of Play>Nation. Walking through DoUC’s model of geographical concepts and Play>Nation’s objects is a spatial experience worth having, that of a landscape of abstract and yet extremely physical exploration, which gets a person looking in new ways at how geography and activity influence each other to create how we live.

Play>Nation will be on until October 2011, at the Design Exchange, 234 Bay St. Admission is $10. DoUC also has a project on exhibit at Harbourfront Centre’s Architecture Room until September 18th, 2011. It focuses on a study of Toronto’s public space parkettes, and ways in which their design could be revitalized with meaning. You can find a free newsprint publication about that at the DX front desk or through the Department of Unusual Certainties’ website.