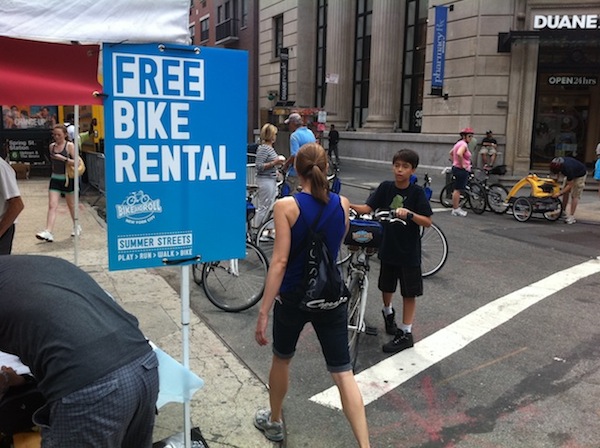 On my recent trip to New York I found myself walking Broadway on a sweltering Saturday afternoon, negotiating the sidewalk amidst hordes of people and attempting to stay out of the way of what I have come to think fondly of as the dance between New York’s homicidal drivers and its suicidal pedestrians and cyclists.

So it was with much relief that my travelling partner and I stumbled upon the fourth annual Summer Streets, a Saturday shut down of Park Avenue and connecting streets between Brooklyn Bridge and Central Park (roughly the equivalent distance of shutting down Yonge St from Front St all the way to Eglinton Ave). As a Streetsblog NYC video shows, shutting cars from the street allows for cyclists, pedestrians, joggers, rollerbladers, and parents with children from all over the city and the surrounding area to flood out into the normally hectic street and enjoy themselves.

We rented—if you can call a free rental a rental—bikes and suddenly the open road was ours for the next hour (if we didn’t bring back the bikes in an hour they charged our credit card one dollar per minute. Ouch).

There are five rest stops along the route where, if you are so inclined, you can partake in activities like the “Belly, Butt, and Thigh Workout” or “Barefoot Running” or “Salsa Lessons”. Since we only had an hour before we began to lose our lunch money with each late minute, we zoomed past these rest stops, which were packed with people and music.

Many cross streets were also shut down, but since the stretch of closed roadway cut through so much of lower Manhatten, a few remained open to allow traffic through. There were volunteers at each of these crossings holding Stop/Go signs as well as traffic police posted to make sure cyclists and pedestrian didn’t accidentally coast through. It might have been the only time in New York that I saw cyclists stop for red lights. Or drivers and pedestrians, actually. The only thing crazier than New York cyclists are New York drivers and New York pedestrians.

After the experience of New York’s famously clogged streets, it was amazing to fly down this wide road with thousands of other cyclists. This was a great way to see a large swath of New York and experience the city in a way that is impossible on a regular basis. As we made our way through the elevated roadway around Grand Central Station, we were treated to a view of the normally busy New York streets. 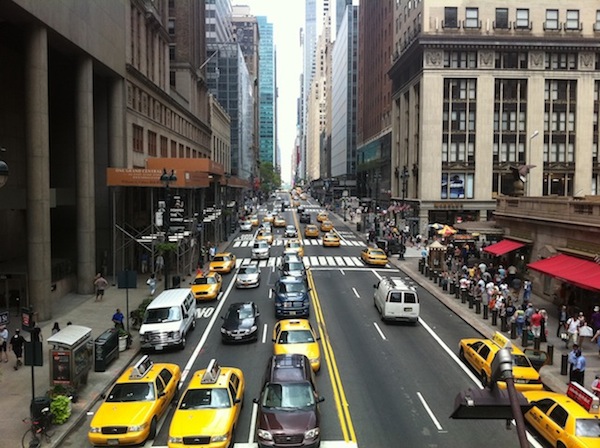 Could we do this in Toronto? When I moved to Toronto, I was immediately impressed with the amount of street shut downs in the summer for street festivals, but would the city be so keen on shutting down multiple kilometres of central roadway so people could ride their bikes and walk?

Spurred on by Bogotá’s Ciclovía, these car-free events have been popping up all over the world. Vancouver is attempting their version of this with LiveStreets, which sees eight kilometres of roadway shut down to cars from Kitsilano to Commercial Drive through the downtown core. Not only does this encourage people who may be too timid to get on their bike and ride, but it shows a different kind of possible city, one that gives space back to people.

I went back to Park Avenue a few days later. It was filled with cars, the pedestrians all crammed onto the sidewalks. I saw few cyclists. The air was filled with the sounds of honking.

photos by the author