Ten days ago, on September 1,  the Toronto Transit Commission quietly marked its 90th anniversary. Apart from a press release and a specially designed Metropass, the milestone passed without much notice. But this year has another significance. One hundred and fifty years ago today, Toronto’s first streetcar began operation.

The Toronto Street Railway was formed in May of 1861 by a group of local businessmen, organized by an Alexander Easton, an American from Philadelphia with some street railway expertise. The TSR was granted a 30 year franchise for the operation of a street railway in the City of Toronto two months later. City Bylaw 353 was enacted on 22 July 1861, with specific conditions for the fledgling new enterprise. The fare could not exceed 5 cents (but without transfer privileges), cars could not operated on Sundays, and the track gauge was to  be 4 feet, 10 7/8 inches to accommodate the standard English wagon gauge in use by private carriages. The TSR was Canada’s first street railway, though the Montreal City Passenger Railway Company followed several months later.

Interestingly, the TSR was not the first operator of public transportation system in the city. Yorkville cabinet and casket maker H.B. Williams operated a regularly scheduled fleet of omnibuses (horse-drawn coaches) between Yorkville and the market starting in 1849. However, rail transport, even horse-drawn cars, offered smoother and faster rides and were more efficient than road-running coaches. Mr. Williams was forced out of business soon after the TSR began operations.

The first TSR line, Yonge, ran on the same route as Williams’ pioneering service, from the Yorkville Town Hall (Yorkville was then a separate village) down Yonge to King Street, then east to the St. Lawrence Market at Jarvis Street. The inaugural run took place on 10 September 1861, the full day of service was on the 11th.

On 2 December 1861, the second route, Queen, was inaugurated, starting from the St. Lawrence Market terminus and then west from Yonge on Queen to the corner of Dundas Street at the provincial asylum (now the CAMH Queen Street campus at Ossington). More routes followed, covering the entire city and the villages of Yorkville, Parkdale, and Brockton. Horse drawn sleighs were substituted for rail cars when snow made the street railways impassable. 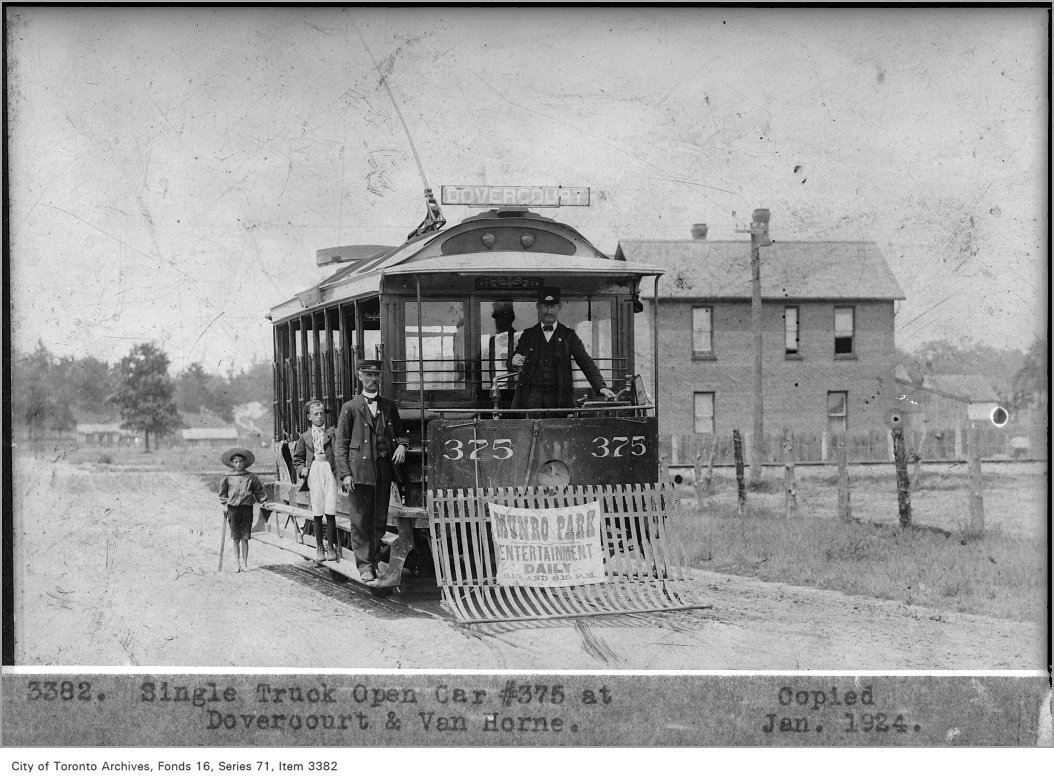 By May 1891, when the franchise expired, the TSR operated 19 lines, with a daily ridership of 55,000. Upon expiration, the city was left to operate the street railway for several months until 1 September 1891, when it granted a new 30-year franchise to the Toronto Railway Company, which was controlled by up-and-coming railway magnate William Mackenzie. Under the condition of the new franchise, the TRC was replace the horsecar network with a cable or electric-powered railway within three years. The TRC retained the track gauge, the 5 cent fare (with the additional requirement that it provide free transfers) and the prohibition of Sunday service.

The first electric streetcar (cable-powered railways, then popular in San Francisco and Chicago, were already becoming passé) began operation on the Church Street route on 15 August 1892.  Dovercourt-McCaul was the last route to be electrified, on 31 August 1894.

After about two decades of satisfactory service, (eventually Sunday service was added) the TRC began neglecting its network (the empire of Mackenzie and Donald Mann was busy building the ill-fated Canadian Northern Railway system), with decreasing incentive to invest money as the expiration date loomed. The city-owned Toronto Civic Railways filled some of the gap in urbanizing parts of the city the TRC refused to expand into, but public operation was favoured by the city and taxpayers. Hence, the Toronto Transportation Commission was formed and took over transit operations on 1 September 1921.

The TTC quickly amalgamated its small Toronto Civic Railway system with the TRC’s, bought new equipment, junked all but the best of the TRC fleet and rebuilt the entire network. It soon took over the Mackenzie-controlled radial lines on Yonge, Lakeshore and Kingston Road and the local routes of the Toronto Suburban. The TTC’s commitment to infrastructure and fleet renewal helped ensure the street railway’s long term viability.

The extent of Toronto’s streetcar system peaked in the mid 1920s after opening new routes in York Township. The first route to be replaced by buses was the short ex-Toronto Suburban Lambton route in 1928, followed by the outer portions of the radial lines between 1930 and 1935. Apart from the loss of the short Davenport line, the Port Credit and Scarboro radials and some rush hour “tripper” services, the system held steady through the Great Depression; the TTC continued to update its streetcar fleet with the arrival of new PCC streetcars starting in 1938.

But it wasn’t until after the Second World War that the policy of streetcar abandonment began in earnest. The Sherbourne, Dovercourt, Lansdowne, Spadina, Weston and North Yonge cars were replaced by gasoline and trolley buses between 1946 and 1948. The opening of the Yonge Subway in 1954 resulted in the elimination of three more routes, including the pioneering Yonge Car. The University and Bloor-Danforth subways provided the opportunity to abandon additional routes; by 1968, there were only ten distinct carlines left, and three carhouses to service them. The planned construction of the Queen Subway by 1980 would have marked the end of the line.

Fortunately, the Streetcars for Toronto committee  led a citizens’ revolt, forcing the TTC and Metro Council to reconsider the streetcar abandonment policy in 1972. This came at about the same time as the rejection of the Spadina Expressway, the proposed demolition and redevelopment of Union Station and Old City Hall.

The last streetcar routes abandoned were Rogers Road, on 21 July 1974, and Mount Pleasant (cast off from the St. Clair/Earlscourt service), on 24 July 1976. Both were replaced by trolley bus service. Rogers Road was amongst the last new streetcar routes, started in 1924 as part of the Township of York Railways, a TTC-contracted service. At the time of abandonment, Rogers Road was an odd appendage from the rest of the network; its replacement by the 63F trolley bus allowed enough PCC streetcars to remain in service elsewhere until replacement streetcars were delivered.

The short Mount Pleasant line was not planned for conversion, but was abandoned because of direct pressure by the Metro Roads department related to a bridge reconstruction project. Complaints from motorists against the locally-preferred streetcars on Mount Pleasant Road  ‘obstructing’ their progress factored into this decision. Today, diesel buses on the 74 Mount Pleasant route operate a minimal half-hourly midday service, with no evening operations.

Toronto’s street railway network has seen a minor renaissance, with new cars delivered between 1979 and 1988, the inauguration of the Harbourfront line and restoration of the Spadina Streetcar. Almost the entire rail network has been rebuilt to higher standards over the last decade, and with new vehicles on their way, the system itself is in excellent shape. That said, there are fewer cars operating than in the 1980s, even though more kilometres of track are now operated. The proposed suburban Transit City lines are all-but-dead, and planned streetcar expansion to the east waterfront and the Distillery District remains in limbo. Yet the streetcar remains one of Toronto’s most distinctive icons.