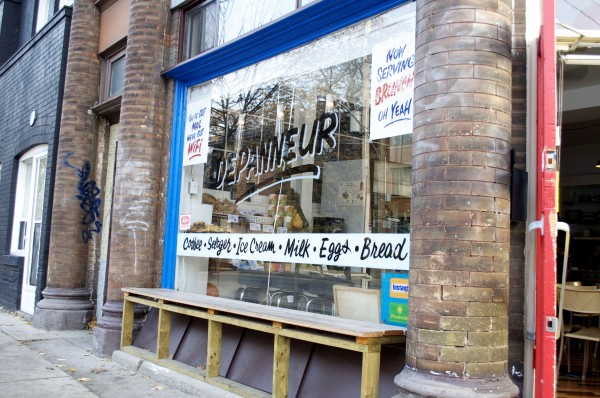 Editor’s note: In our Fall 2011 issue, “Hungry City”, Liz Clayton and Sean Waisglass took a look at neighbourhood coffee shops and cafes. Over the next few weeks Spacing Toronto will be expanding on those articles, exploring restaurants and cafes in our city that are about more than just business. By creating open community spaces and employing ethical and local practices, they’re bringing people together with that most intrinsic enjoyment: food.

The Depanneur was started by Len Senater, a former design firm partner who had never worked in the restaurant business before. Initially put off by the resto business model, Senater created The Dep and it’s sister company, The Rusholme Park Supper Club to reflect what he loved most about the communion of food. The Supper Club is a truly unique experience, wherein anyone (professional chef or otherwise) can take over The Dep’s kitchen and host a dinner party.

Senater describes it as a place “…where professional chefs but also student chefs, or retired chefs, or caterers or even just amateur foodies, like myself, could have a venue where they could come and cook and share that food with an enthusiastic audience.” Like an informal setting where there’s no separation between what happens in the kitchen and what happens at the table. In turn, The Depanneur is like a cornerstore meets cafe, says Senater, where they sell ingredients used in their cooking and stir up fabulous snacks and brunches.

“This is intended to be a much more participatory environment. By coming here you are more actively engaged in what’s going on with food than to go to a restaurant with a kitchen in the back and with people you never see and food that comes from somewhere that nobody ever knows about,” said Senater.

The Dep is located at 1033 College Street, just East of Dufferin. Senater turned a former convenience store that he laughingly describes as “specializing in single cigarettes and expired clamato,” into the quaint, open-concept space that is The Depanneur. The area, known as Dufferin Grove, boasts a large diversity of cultures and, therefore, food experiences. Dufferin Grove is also home to Dufferin Grove Park, one of the city’s most prominent community hubs. To appeal to everyone, Senater tried to stay away from the traditional resto business model.

“What if I took away all the things I didn’t like: all the pomp and circumstance, all the elitism, all the luxury; the pretense? And then you just left the food, the chef, and the people you’re dining with? I think it’s been creating really strong, memorable experiences with people, and you don’t need to be doted on, you don’t need lavish luxury and decadence to have a really wonderful experience with food,” said Senater. 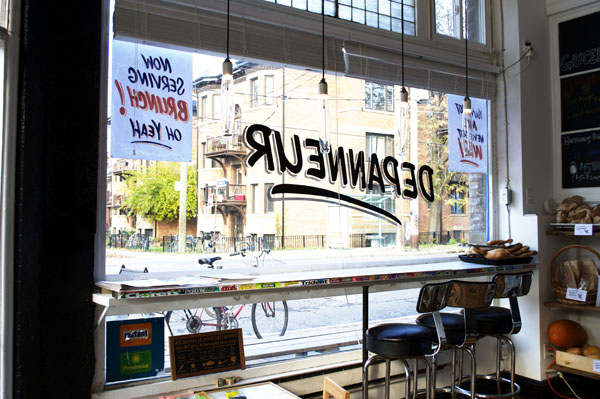 What they’re all about:

The initial goal of The Depanneur was “…not so much to create a cafe or a restaurant, which there’s lots of, but to create an open format space where interesting food things could happen,” said Senater. “Where chefs and diners and producers could get together and collaborate in fun and unusual and interesting ways.”

“There was a quote that I saw when I was in San Francisco and it went: ‘Small business as our activist medium,’ and I was really inspired by that. You can affect a positive change through the medium of a small, sustainable business. It doesn’t have to be not for profit,” said Senater.

Both The Dep and Rusholme are all about bringing people together and making a cohesive food community. For example, The Dep sells produce from Prairie Boy Farms run by Grant MacPherson that specializes in chemical-free, organic produce. Local entrepreneurs Lisa Kates “The Food Gypsy” (who makes creative and seasonal soups), Sara Lapell who runs Nice Buns specialty baking, and gourmet marshmallow-er Mai Ha of I [Heart] Puffy Love all contribute to the food that is served and sold at The Depanneur. “I’d like to, as best as I can, speak to the provenance of the ingredients that I use,” said Senater.

“[We’re] just trying to encourage and cultivate all these food entrepreneurs and give them a place where they can show off and let them use my kitchen,” said Senater.

Senater also tries to maintain a wholly-green space to counter what he says is an “outrageous amount of food waste in the industry.” For example, The Dep sells bread, uses it in their cooking, and then keeps leftovers to use on the weekend as bread pudding.

“My dream for this is to open source the business model. So everyone can see how much money it makes, what works and what doesn’t, so that other people might pick up this model and start to open their own locally appropriate variations on this in their own neighbourhoods,” said Senater. “The restaurant model is so expensive, that it ends up with a sort of inbred conservatism. Because those stakes are so high, you can’t take a lot of risks because you can’t afford to fail.”

How they connect with the community:

“I really wanted to focus on building community through food in a way that the nature of the restaurant model isn’t really well suited for,” said Senater who feels that through branching out into various communities they would bring their food traditions and food ideas into other communities and it would create a network of ideas.

One of the biggest challenges in creating a unified food culture in Toronto is the lack of available and affordable commercial kitchen space. Senater is currently working with two other organizations to help rectify that shortage, one being the CSI Food Constellation that’s based out of the Centre for Social Innovation, and Food Chain run by Leslie Gaynor (of Mitzi’s Sister fame); all identifying the terrible lack of commercial kitchen space for people to start out.

“[We’re] trying to create a richer, grassroots food infrastructure in the city,” said Senater who also cites organizations such as the Toronto Underground Market as examples of people trying to reclaim their food culture. “It’s not simply the province of this elite cadre of chefs and well-heeled diners. There’s incredible talent in Toronto kitchens,” said Senater.

In addition to the Toronto food community as a whole, Senater is also reaching out to the amateur foodies in his own neighbourhood.

“There’s so many interesting ways that you can connect the dots. I know a woman who’s teaching jam-making at the youth centre at Dufferin mall. So, she’s teaching at-risk youth how to make jam and do some cooking. So I said: ‘Why don’t you guys come make the jam here at The Dep, and then we can sell the jam?’ So it wouldn’t just be a cooking class, it would an entrepreneurial opportunity,” said Senater. “Instead of having to scramble for funding, it would pay for itself. There’s so many interesting ways to engage the community using food and building around food that’s more than just the transactional business of coming in and buying something.”

Senater also believes that the supper club model can be more than just an interesting way for chefs and foodies to actively engage in eating.

“If there were a whole bunch of these supper clubs scattered throughout the city, then these young chefs could have the creative freedom of a freelancer, but with the stability of a full time gig,” said Senater. “We could actually create a food ecosystem that these people could exist in. And then we could have more workshops and more direct communication with the producers.”

“It’s part of larger movement that is trying to reclaim food as an intrinsic part of our culture and an important part of our daily lives,” said Senater. “Something that we participate in.”