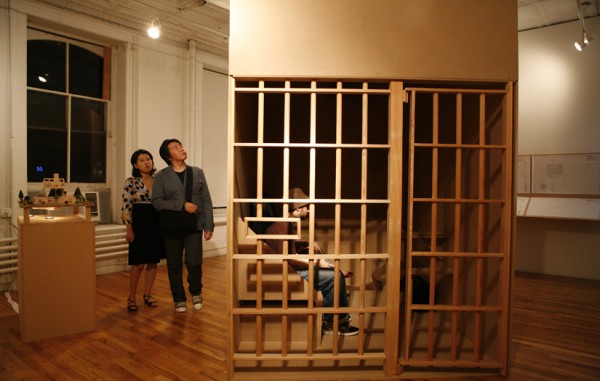 Herman’s House follows the friendship and working relationship of artist and activist Jackie Summell and Herman Wallace, a Louisiana prisoner who had been in solitary confinement for more than 30 years.

The architecture of Wallace’s existence—6 feet by 9 feet—are horrifying to Jackie, and she begins working with Herman to articulate, and then visualize, the dimensions of his dream home. Their deep, respectful friendship is filmed over five years as Jackie mounts and tours with “Herman’s House,” an exhibit contrasting Herman’s day-to-day reality with a scale model of his own design. At a certain point, the exhibit is deemed insufficient, and Jackie and Herman decide she should buy a plot of land and build his house while he awaits parole.

Solitary confinement being what it is, Herman never appears in his own film, but his rich voice comes to us through frequent phone calls with Jackie. Herman’s thoughtful views on violence, family, and perseverance are both a balm and a motivation for Jackie as she traverses the streets of New Orleans, looking for the right plot of land.

Herman’s House is hopeful in its concreteness. Issues of racial injustice, poverty, and cruel incarceration practices are always present, but the film’s fairly tight focus on Jackie’s relationship with Herman and goals on his behalf make it a wonderfully personal story.