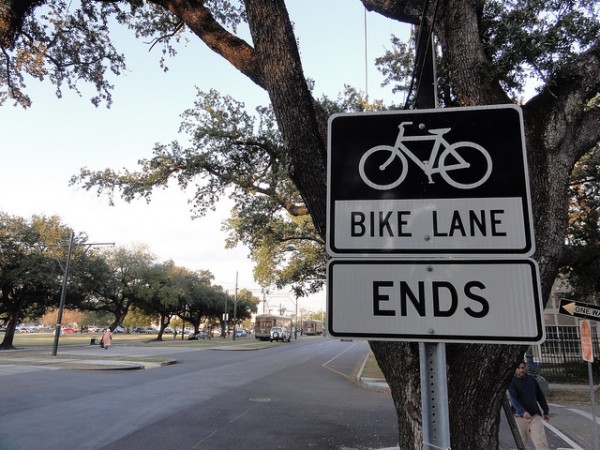 This past weekend I went with a few friends on a long bike ride down the trails along the Humber River, east along the waterfront, and up Strachan Ave. to Trinity Bellwoods Park. We waited patiently at the intersection of Strachan Ave and Lakeshore Blvd with about ten or twelve other cyclists who were all waiting to travel northbound up Strachan Ave. However, in order to do this we had to wait on the wrong side of the road, cross north, then wait again to cross east to access the northbound bike lane.

So, I was happy to see the City’s Public Works and Infrastructure Committee approve a small item (number 10) under the larger Bike Trails Implementation Plan on Tuesday, that directs Transportation Services to report on the installation of a northbound bicycle crossing to allow cyclists to cross from the Martin Goodman Trail onto the bike lane at Strachan without having to do that annoying jog around the intersection.

It’s small, sure, but these small improvements to the bicycle network in Toronto make riding around the city more intuitive. Of course, we should always be pushing for more bike lanes and better cycling infrastructure over-all, but I think sometimes in the noise over high-profile cases like the Jarvis St bike lanes, we miss opportunities to work on the smaller, more local improvements that fly under the radar, but would make cycling just that much better in this city.

While we have seen smaller improvements to the bicycle network that have made riding safer and easier—like the inclusion of bike boxes—where the city is really lacking is in those areas where a bike lane ends with only a sign that tells you soon you’ll be on your own. Take the spot where the Harbord Ave. bike lane ends when it hits Ossington Ave. Few might know that a designated east-west ‘bike route’ continues just a little south on Ossington on residential Dewson St. 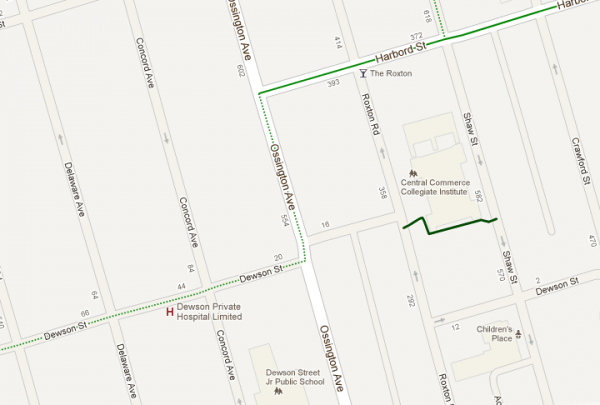 Cycling signage in Toronto is poor at the best of times and non-existent the other times, which, at this particular intersection, leads many cyclists to fend for themselves even though connections do exist for those wanting to ride through a designated residential ‘bike route’. Imagine an arrow painted on the road to tell cyclists which way to turn to connect to Dewson, a bike box to help them make that left turn safely, and sharrows on Ossington to lead them to Dewson. Now imagine this kind of cycling connective tissue all over the city.

It’s these moments at intersections, when you don’t know where to turn, how to do it properly, or where to go next, that make cycling in the city a daunting, or at least head-scratching, task for those not accustomed to it. Taking away some of the confusion through small improvements such as painted arrows on the ground, bike boxes for turning, and sharrows that show you where to merge with traffic (like the ones on the eastern edge of the Prince Edward Viaduct) makes what cycling network we have work better, whether you’re comfortable riding on arterials or you’re looking to connect through residential streets for a quieter ride.

Even something that may seem as inconsequential as signage is crucial. We should be painting bike route symbols on the street rather than hiding them in tiny blue signs half covered by trees and electrical wires. The easier, safer, and less confusing cycling is in the city, the more people we will have out riding. I think the city would benefit greatly from a comprehensive bike signage overhaul, but small interventions to improve connections is something we can each work on.

Those looking to connect with other cyclists in their neighbourhood to discuss these smaller, more local improvements could benefit from connecting with their ward group organized underneath the umbrella of Cycle Toronto (formerly Toronto Cyclists Union). While some ward groups seem more active than others—the group for Ward 44-Scarborough East has two people while Ward 14-Parkdale/High Park has 54 people—it’s a starting place to make those connections with other cyclists in your area.

We should always push for the big things like more bike lanes on arterials, but it’s good to remember that when it comes to cycling it’s important to sweat the small stuff, too.

photo by Editor B, map from Google Maps