Sixty images placed back to back and played on repeat can create a story. That’s the point of a flip book. Filming someone flipping through one and making a video out of that? That is bringing art to the masses.

What better place to showcase the work of local artists depicting local scenes than in a place thousands of people pass through every day: Toronto’s subway platforms? And so, Flip-Toronto was born — an art exhibit that is currently on display on the screens in TTC platforms. Eight artists each created flip books which were then filmed, so the images blend together as though someone is flipping through them. Each book is unique and shows a different area of the city.

“The artwork and the stills from the artwork are pretty stunning,” says Claire Sykes, one of the curators of Flip-Toronto. “The submissions were all good, and the stories that people were telling were all interesting.”

Stories include the singing crossing guard at Dufferin and Bank streets, musicians in Museum station, and distinct neighbourhoods in cities as represented by the intersection of Dundas and Keele. They’re told in a variety of ways — some people chose photography, others used art and animated their drawings. Each is fun to watch and each tells a story.

“Art can open your eyes to seeing something that is usually so familiar and mundane everyday on your commute,” Sykes says. “(It can) allow you to see it differently and give you a different perspective on something.”

One of the artists, Tania Ursomarzo, is an architect living in New York. Originally from Toronto, she says that when she saw the call for submissions in 2010, she had to send in a proposal. Her flip book is about Chinatown, an area she lived in and around for 15 years, that has in many ways shaped her.

“It’s always a lively, energetic and very much animated part of the city,” Ursomarzo says. Her book shows sequences of movement in the neighbourhood — people coming in and out of buildings, as well as vehicles, streetcars and bicycles going down streets. 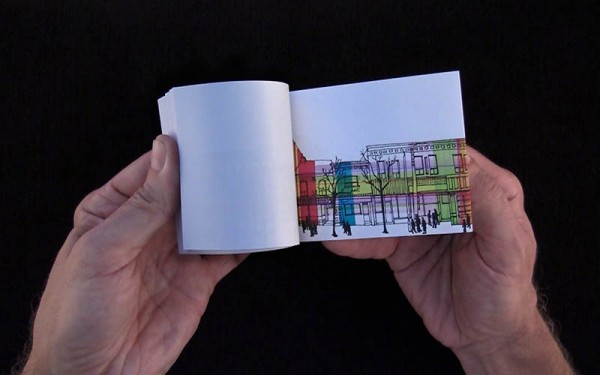 “I became an observer and participant in some way in terms of the activities there,” she says, adding one of the main aspects of all forms of her work is the challenge of re-examining familiar spaces and phenomena. “Toronto changes so much in even five years,” she says, adding that doing this project was interesting for her after being away from the city for awhile because every time she comes home there are parts of the city she doesn’t recognize, and has to reacquaint herself with.

Flip-Toronto was inspired by a similar project called Flip-Beirut, a flip-book project done by Lebanese publishing house Dar Onboz. Sykes (of Toronto’s Circuit Gallery) joined with Sharon Switzer (Art for Commuters) and Susana Reisman (also of Circuit Gallery) to take on the challenge of not only creating flip books that told stories about the city, but also finding a way to show those small physical books to people across Toronto.

“It’s just wonderful to have an opportunity to put art out there in a public way that is not your conventional gallery space,” Sykes says. “It’s not about the commercial aspects, it’s about sort of making stories available and there’ something beautiful about that.”

There are plans to have the books published in a box set. For now, you can see the flip books in subway stations until August 19.