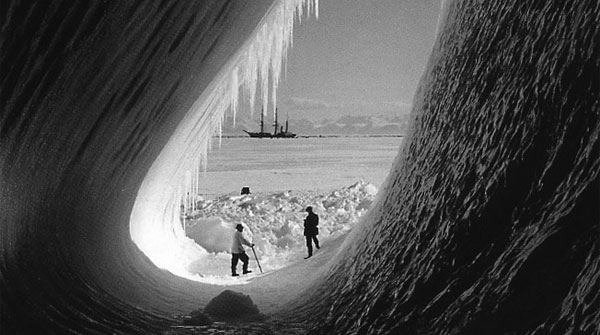 This photo of Antarctica was taken more than 100 years ago — back in the days when most of the icy continent had yet to be seen by human eyes. It’s January 1911, the height of the Antarctic summer, during one of the most infamous expeditions in the history of polar exploration. And one of the men in this photo (I’m pretty sure it’s the guy on the right) is from Toronto.

His name was Charles Seymour Wright. He was born here in the 1880s and grew up in Rosedale. He went to Upper Canada College, studied physics at the University of Toronto, and then headed off to England on a scholarship to study cosmic rays at Cambridge.

That’s where he met the renowned scientist Sir Douglas Mawson. Mawson had just returned from Antarctica, where he spent two and a half years climbing mountains and crossing glaciers and nearly freezing to death with one of Britain’s most famous explorers, Sir Ernest Shackleton. The expedition had come closer to reaching the South Pole than anyone before them, but they’d finally been forced to turn back. Now, Mawson explained, there was going to be another attempt, led by Sir Robert Falcon Scott, another one of the British Empire’s great Antarctic heroes.

Wright was determined to be part of Scott’s expedition. He already had experience with one of the colder parts of the world, having taken canoe trips as a young man in the northern reaches of Canada. But his application was rejected — and it seemed, at first, as if he wouldn’t get his chance to seize “the last remaining great prize of exploration.”

So Wright headed to London to make his case in person. And he decided to walk to the meeting. From Cambridge. A hundred kilometers away. This time, his application was accepted. When Scott’s team sailed south from New Zealand in 1910, Wright was on board as part of the scientific contingent.

The expedition didn’t get off to a good start. Before they even made it to Antarctica, they ran into storms and got stuck in the ice for 20 days. Their ship, the Terra Nova, survived — she was big and strong and weathered, having already spent decades hunting seals off the coast of Labrador and saving earlier explorers who had been stuck in the ice themselves. But that was just about the only good news. One of the expedition’s sled dogs drowned, and the pack ponies they’d brought along were weak and dying, not cut out for the extreme cold. When Scott and his men finally did arrive and begin to unload their equipment, some of it fell through the ice and sank. Worst of all, they’d gotten some worrying news: Roald Amundsen, the Norwegian explorer who had been the first to make it through the Northwest Passage, was already in Antarctica. He was camped closer to the South Pole than they were. He was planning to beat them to it.

Still, it was too risky to rush. For the next year and a half, Wright and the other men lived out of an insulated hut in some of the coldest, harshest conditions on Earth, preparing for the months-long journey ahead. Occasionally, some of them would set out across the ice for weeks or months at a time, studying geology and wildlife or laying supplies down along the route they planned to take to the Pole. Each trip was an ordeal. There were blizzards and dangerous accidents. Sometimes the temperature plummeted below -60°C. More dogs and ponies drowned. Some animals froze to death or keeled over from exhaustion. Back at camp during the winter months, the men would try to keep from going crazy in the darkness, giving lectures and playing soccer in the faint light outside the hut.

Finally, in November of 1911, Scott made his move. He led 16 men — including Wright — out onto the ice and headed south. His plan was to send men back in teams as they got closer to the Pole, so they could take sled dogs and ponies and motorized sledges part of the way.

Within the first 80 kilometers, the sledges died. After running into a blizzard, all the ponies had to be shot. But the men and dogs soldiered on, across the ice shelf, up one of the biggest glaciers in the world, and out onto the Antarctic plateau. It stretched on for hundreds of kilometers between the men and their goal.

That’s when Wright and most of the others turned for home, taking the dogs back with them. They would replenish the supply drops along the way. Meanwhile, Scott and four others continued south on foot. If all went well, they would become the very first people to ever stand on the southernmost point of our planet.

Two weeks later, on January 17, 1912 — two and a half months and 1300 kilometers away from their camp — Scott and his men made it to the South Pole. Amundsen’s flag was already there. The Norwegian beat them by five weeks. They’d lost.

The return trip would be an even bigger disaster. They spent a month trudging back over the plateau and down the glacier, starving, exhausted and severely frostbitten. Toes and feet turned black. Fingernails were lost to the cold. The men kept falling and getting lost. When they reached the bottom of the glacier, one of them collapsed and died. After a few more weeks spent suffering through some of the worst weather ever recorded in that part of the continent, another man decided that he was only slowing things down. One morning, he simply walked out of the tent to die. “I am just going outside,” he told the others, “and may be some time.” He didn’t even put on his boots.

Scott and his last two surviving men struggled on for a few more days, but ran into another snowstorm just a few kilometers from the next cache of supplies. They couldn’t go any further. “We shall stick it out to the end,” Scott wrote in the last entry in his diary, “but we are getting weaker, of course, and the end cannot be far. It seems a pity but I do not think I can write more. R. Scott. For God’s sake look after our people.”

Months went by before a search party finally found them. It was Charles Wright who first spotted the tent. Inside, the three frozen bodies lay dead beside their letters, photos and journals. The survivors buried them in snow, erected a cross, and headed back home to civilization for the first time in years.

Scott and his men hadn’t been the first to reach the South Pole, but thanks in part to those diaries and photographs they’d still go down in history. Their story made headlines around the world. They were hailed as tragic national heroes — brave and noble sons of the British Empire. Dozens of monuments were erected. A century later, people are still writing books and articles and blogposts about them.

The Terra Nova (which you can see off in the distance in the photo above) ended up in Newfoundland hunting seals again; she finally sank off the coast of Greenland during the Second World War. The other man in the photo with Wright — an Australian geologist by the name of Thomas Griffith Taylor — actually ended up in Toronto for a while, too. He was the first Head of the Geography Department at U of T.

As for Charles Seymour Wright, he had another 60 years left to live. And they were eventful years. He served in France during WWI and helped to develop a wireless communication system for the trenches. He was awarded a Military Cross and the Order of the British Empire for that. During WWII, he helped to invent a new radar system. That work got him knighted.

Eventually, Sir Charles returned to Canada; he’d spend the rest of his career as a scientist in B.C. But before he died in 1975 at the age of 98, he made two more visits to Antarctica. This time, when he needed to take a scientific reading at the South Pole, the plane trip from camp only took three hours.

They say that as he was about to board his flight back home, someone asked him what he thought of the Antarctic — of the icy continent he had been one of the first to explore.

“Personally,” he replied, “I hate the fucking place.”

Main image: detail of a photo taken by Herbert Ponting. (You can find more of his photos of the expedition here.) Below, another one of his images: the grave of Robert Falcon Scott, Henry Robertson Bowers and Edward Adrian Wilson, 1913. 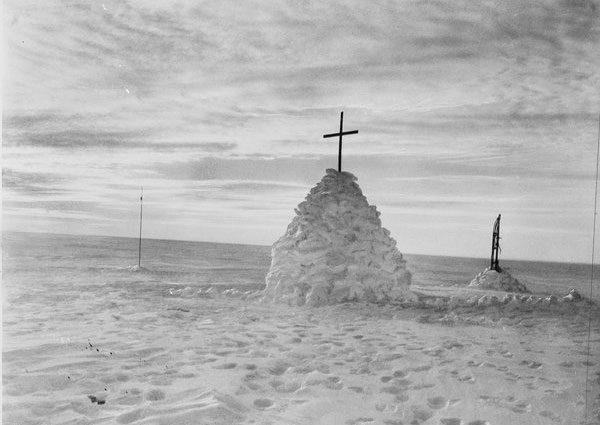