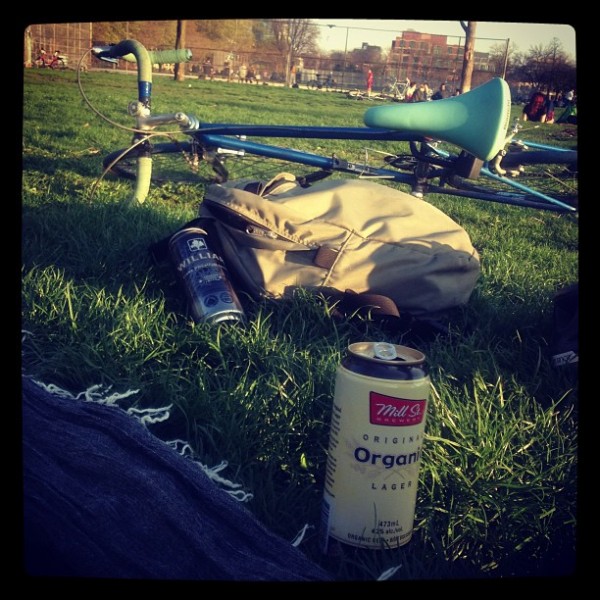 Have an opinion on this? Join in on the meeting tomorrow and let us know your thoughts in the comments.

Every nice day we have in the city sees twenty- and thirty-somethings flock to Trinity Bellwoods Park to enjoy the weather, spend time with their friends — and have a few drinks.

The park’s popularity as an inconspicuous drinking spot has been increasing every year. Last summer, most of the tippling park-goers were congregated around the lip of the dog bowl with their brown-bag beverages. On my first trip there this year, at the end of April, much of the field from the north end down to Trinity Circle was packed. A number of groups also had cases and coolers out in the open, showing little regard for the furtiveness that dictated behaviour in previous seasons.

This creates a tricky situation.

Of course, we’re talking about something that’s unlawful — but is it something that’s profoundly damaging the surrounding neighbourhood? As the popularity of this sort-of-speakeasy grows, it is creating its own organic sense of community, which may be capable of regulating itself: I’ve witnessed the public shaming of litterers — and the convenience of the elderly-Asian recycling system.

One could even argue that this congregation of scofflaws is making the area safer. With a large, vibrant, and increasingly engaged community springing up, there is less room for seedier groups to operate; it’s quite a Jane Jacobs sense of how neighbourhoods should be. While the circumstances are very different, the park’s revitalization and new-community vibe isn’t too far from what Dufferin Grove experienced a few years ago.

There is much more violent, disruptive, and disrespectful behaviour out on the streets of any big bar strip — where the alcohol is generally kept inside — than in Trinity Bellwoods. Even in my corner of the relatively peaceful Annex, there are always a few altercations happening amongst patrons of the Brunswick House on Thursday and Friday nights, not to mention the vandalism that goes on around the houses in close proximity. It seems to me the people frequenting Trinity Bellwoods are not the kind you’d find pissing on your front door when you come home at night.

So how can a compromise be reached between park-goers and the residents who are growing uncomfortable with public drinking just beyond their fences? Should an unstructured community be allowed to self-govern, outside the bounds of certain inconvenient laws? Would enforcing alcohol laws fix any problems, or would it just force Trinity Bellwoods’s patrons to abandon the park for parks elsewhere?