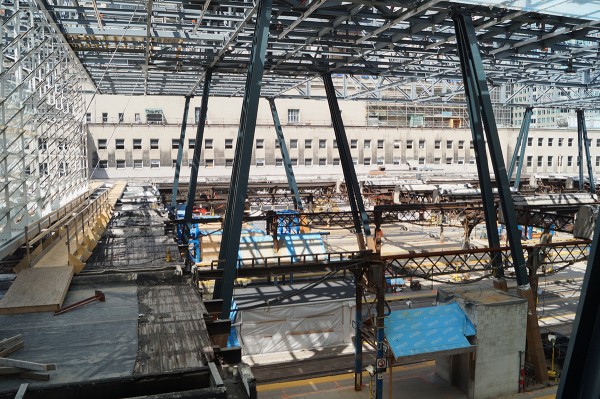 As we walk carefully along a catwalk suspended high above the railway platforms at Union Station, David Swanson, Metrolinx’ senior construction supervisor meticulously itemizes the features of what is quickly becoming an iconic piece of Toronto — a “jewel glass box” floating over the tracks, as the Canadian Architect jury noted in its description of the prize-winning design.

The triple-layer laminated glass panels, he begins, have been engraved with overlaid patterns of dots designed to reduce direct sunlight on the passengers below. Spot lights, installed at regular intervals, will provide nighttime illumination, while a computerized air circulation system that controls the slatted glass walls will allow diesel fumes to escape.

But up here, at the crown of this striking architectural object, the most noticeable feature is the geometrical lattice of slate-gray I-beams that give this enormous glass table-top its structure and strength, but also its sense of buoyancy. “There’s a lot of steel up here,” remarks Swanson, surveying the tracks from a elevated vantage point not available to commuters. “Some of these are 15 tonnes.”

Last week, Swanson and his boss, Michael Wolczyk, the veteran Metrolinx project director, gave Spacing a tour of the $250 million shed project [PDF], which was designed by Yolles, Zeidler Partnership and ERA. Unlike the new Union Station subway platform, or the cavernous retail/passenger concourses being dug beneath the existing station, the shed’s 200-person construction crew must constantly share its workspace with the thousands of people who ride the GO Trains and are now beginning to use the newly added Lakeshore service. “I always say it’s like trying to do surgery on a patient while they’re running a marathon,” Wolcyzk says as we pick our way among the platforms (see more photos from the tour). 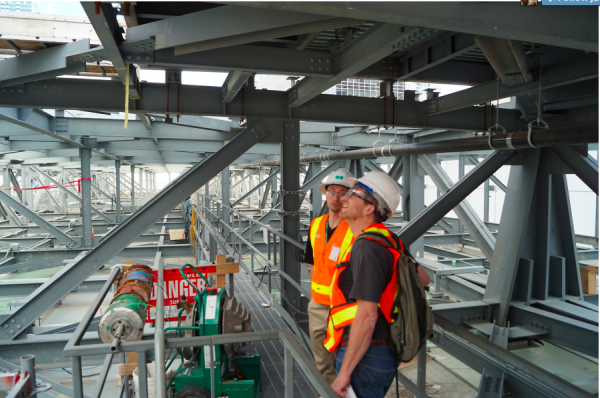 As with many of Metrolinx’ other GO Train projects, much has depended on staging the construction to maximize the amount of overnight or off-peak work. But Wolczyk’s team has had to be especially innovative in its approach to this undertaking, particularly because so much of the project involves fairly radical surgery to the platforms themselves.

One of the new shed’s distinctive features, for example, are the inclined stilt-pairs that hold the glass box aloft. To anchor them properly, the crews had to peel open portions of the platforms, with the construction gash covered over during the day by wooden planks. A similar approach has been used for the dozens of new platform entrance/exits that will extend down into the new western concourse.

Wolczyk also explained that in order to accelerate the shed construction – it began in January, 2010, and will be completed by April, 2015 — his engineers spent a year designing and building a special tower crane that drives right through one of the central platforms and down to bedrock. But to permit passengers to continue to use that platform, the engineers left an opening at the base of the crane large enough for a luggage trolley to pass through.

In the meantime, Metrolinx’s contractors have been removing or restoring parts of the 1920s-vintage shed — a dimly-lit, low-slung structure that consists of pre-cast concrete smoke ducts, wood-plank roofing and a rare type of iron truss. Because the original shed is a federally-designated heritage structure, portions are being rehabilitated with original materials. But the central chunk, under the glass box, is being removed, piece by crumbling piece.

Again, Wolczyk focuses on the staging complexities. The old shed, he explains, contained dense thickets of heavily corroded wiring for the signals and overhead lighting along the platforms. So before any of the demolition could begin, the electrical contractors had to deploy hundreds of metres of new “conduits” — basically aluminum or PVC tubes that run along the ceilings of the newer portions of the station, and serve as detours for all that wiring.

Finally, Wolczyk took care to point out how Metrolinx was leveraging the shed construction process to make efficiency improvements designed to make GO service more reliable. One example: at the southern-most edge of the train shed, a glycol floor heating system has been built into the new concrete platforms for tracks 26 and 27.

The reason? In the winter, the heated concrete will melt snow and ice, and so GO crews won’t need to spread rock salt, which has a tendency to get lodged in the door tracks and prevents them from closing properly. With 40 to 48 doors per train, the search for the jammed one can be time-consuming, which leads to delays and customer complaints. Metrolinx has made similar improvements to its track-level switches east and west of the station. A switch that doesn’t connect properly because of ice can rapidly trigger a four to five train back up, which means delays for 10,000 people.) 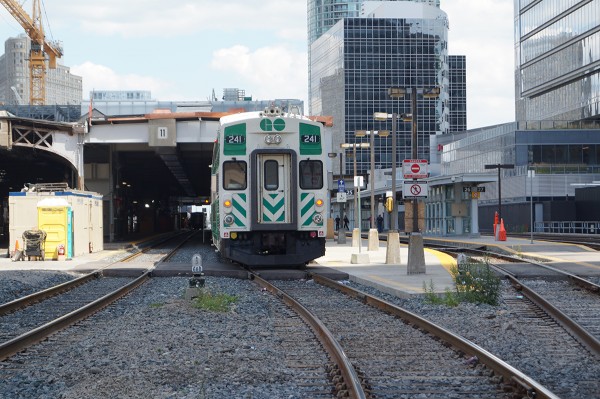 The final tranche of project, which will begin soon, involves preparing the northern-most rail line (i.e., the track closest to the station house) for the new airport express service up to Pearson International. Those three-car diesel trains will stop just west of the train shed, with automated exit/entrances punching through a brick wall and leading directly into the Skywalk corridor over York Street.

Wolczyk and Swanson led us along a rubble- and equipment-strewn area where the old 4/5 tracks had been recently removed and sent to scrap. As with the rest of the project, there were no opaque screens separating the work site from the traveling public, which is just how Wolczyk likes it.

“Customers see it happening and they’re part of it,” he said, his engineer’s enthusiasm very much on display. “The steel and the glass are going up every day. It adds to the experience.”