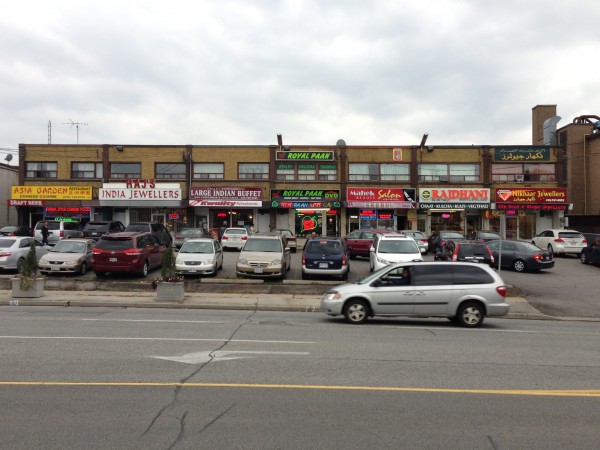 This fall I’m honoured to be the Writer in Residence at the Toronto Public Library. One of the things we’re hoping to encourage is more writing about the city. That means people like you, writing from downtown to the city limits. We’re doing a number of walks over the  next month an a half around town (Thorncliffe, Yonge St., Bendale, Peanut Plaza), plus some events (How to get published and how to use social media) that are all listed here. Please do think about submitting some non-fiction work on Toronto, either something you’ve got socked away on your hard drive, or something you’ve been itching to write now. Do it! The following is a cross-post from the Writer in Residence blog at the TPL. Pic from Albion & Islington. Maybe you want to write about it too?

Sometime it seems like not much is written about Toronto, that it doesn’t exist in print and in our imaginations the way, say, New York does for New Yorkers or London does for Londoners. The opposite is true though, there’s been an incredible amount of writing done about this city, both in fiction and non-fiction. This is, after all, a city of writers, and some of them even write about the city they live in. In Amy Lavender Harris’s book, Imagining Toronto, she compiles hundreds of pages of Toronto mentions found in literature, and in this town full of smart people with a bunch of universities (particularly ones with Canadian History and Urban Planning departments), the local history and analysis shelves at the library at filled with books.

And yet we think nobody writes about Toronto.

Part of the reason is we’ve been trained to not get too excited about this place, but with my writer in residency I hope we get change that, a little bit, and turn more people into Toronto writers, especially ones writing about the parts of the city we don’t hear too much about. Much of the Toronto writing that does exist involves the old City of Toronto, while the former cities and burroughs tend to go unexplored (though there are numours exceptions).

We’ve planned a bunch of walks starting from Toronto Public Library branches across the city over the next two months, and I hope both locals and people that just want to explore a new neighbourhood come out. I’m certainly not an expert on any of the neighbourhoods we’ll walk through, but I do like to wander, so I hope you’ll come and walk and talk about the neighbourhoods we pass through, sharing your own thoughts, memories, or ideas and asking questions. The idea is to get a little excited about the places we live.

Walking often leads to writing, being in the place gets us thinking. It’s how I usually write about a place; I’ll go for a long walk through it first that might seem aimless, but ideas always come. I hope participants on the walk will feel compelled to write about their neighbourhoods (either the one we walked through or another) or share their existing non-fiction writing with me. Let’s chat about it, and we’ll even be posting some of it here on this blog until December. We will be accepting manuscripts until the end of November.

I’ll also be posting snippets of research items I gather in the stacks and other thoughts here. Perhaps some of that will inspire you to write too. Happy, sad, criticial, or celebratory, Toronto needs it all.

The more voices in the city, the better we’ll know ourselves and each other.