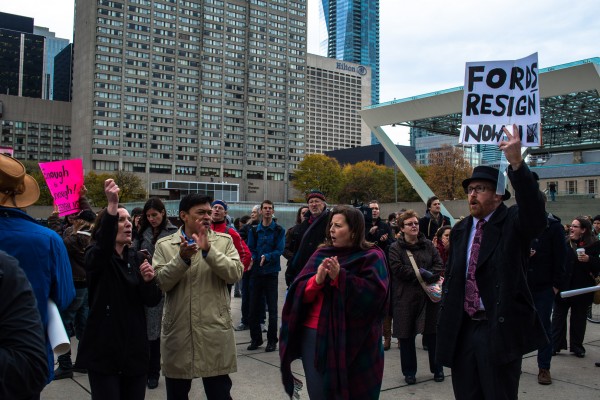 Chanting “Ford, what is he good for? Absolutely nothing,” and “Hey hey, ho ho, Mayor Rob Ford has got to go,” more than 200 protestors amassed at Nathan Phillips Square outside City Hall today demanding Mayor Rob Ford’s resignation.

Save Toronto, the activist group that helped arrange the protest, had already been planning a rally for Nov. 13 when, on Tuesday, Ford admitted to using crack cocaine and gave no indication of stepping down as mayor. That announcement spawned a critical mass ahead of schedule.

“It was the result of a lot of people saying this is ridiculous, we can’t wait a week, we’re angry now,” said Nikki Thomas, Save Toronto’s spokesperson, in a telephone interview from Vancouver, where she is currently away on business.

Over 400 Facebook users had clicked attending on the event’s page in advance, in spite of short notice.

“We figured that 100 people would mean success for something that was basically not planned until 18 hours before. We didn’t even know for sure that it was happening until after the press conference,” said Thomas.

About 10 minutes before the protest’s scheduled noon start, the reporters milling about seemed to outnumber those there for the rally. But by 12:30 p.m., the crowd numbered in the hundreds.

Protestors banged on pots and pans, waved signs, and used chalk to mark the cement with political messages.

After scrawling an arrow pointing westward with the words “Etobicrack that way, where integrity is missing!” written beneath, protestor Greg Downer said he came out to rally for Ford’s resignation partly because “if he actually said homophobic and racist remarks he has no right being in public office.”

Downer was referring to comments Ford allegedly made in a video Toronto police now say they are in possession of.

“You know, I was reading the City Council’s code of ethics, code of conduct, on my way here, and [Ford’s] violated so much of it, I don’t know why someone doesn’t hold him accountable to it,” he continued.

Ben O’Brian, who found out about the protest through a text from a friend, said it was the first one he’d ever been a part of.

“I’ve never actually felt so outraged and so incensed that I’ve had to come and physically be a part of a protest like this,” he said, adding, “I think everyone should.”

He said what upset him most wasn’t Mayor Ford’s reported substance abuse, but instead, “the fact that he was lying the whole time.”

Others mentioned Toronto’s tarnished reputation as a reason to stand up and call for Ford to step down.

“We’re now on the world stage as a joke, city business isn’t getting done, and we have to take it back, that’s why I’m here,” said Dawn MacDonald, holding a sign that read “Every time the Mayor smokes crack, another angel gets its wings ‘God bless the people of Toronto’ – Mayor Ford.”

“I think we just have to keep pushing political pressure… we can’t let [Ford] forget what he’s done to our city,” she said.

By around 1 p.m. the crowd began filtering out of the square, with some remaining to write messages in chalk on the City Hall podium ramp.

Save Toronto said the original protest scheduled for Nov. 13 at 12:00 p.m will still happen as planned.

“We’re definitely encouraged that we can have a much bigger turnout next week with the proper organization and a lot more notice,” said Thomas.