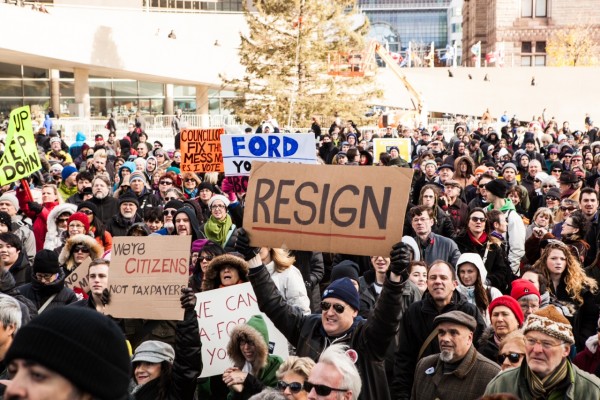 For the second time in as many weeks, protestors flocked to City Hall calling for Mayor Rob Ford to step down. But unlike last week’s protest, which saw hundreds attend, a much larger crowd of more than 1,000 showed up today.

“One thing I will say in Rob Ford’s defense is he has made citizens into activists on a level that no one ever has in this city before,” Norman Wilner, a NOW Magazine writer, said into a megaphone sparking cheers from supporters.

Wilner was one of half a dozen guest speakers activist group Save Toronto brought in for the more organized follow-up to a rally held last week in the wake of Ford’s admission of smoking crack cocaine.

After a series of brief speeches from others including Nikki Thomas, Save Toronto’s spokesperson, and Brenda Cossman, a law professor at the University of Toronto, the crowd shifted to face City Hall to a chorus of “resign, resign, resign.”

And while that was the unifying message of the event, protestors had many different motivations for coming out.

Lori Sears, who caught a cab from the Beaches to make it out, said she was at the rally for her children.

“I’m always preaching to my kids that if you want to change something, then be the change,” she said, accompanied by her 10-year-old son Connor.

“[Ford’s] not a good example for my kids, he’s an embarrassment to the city, we need a strong leader, we need someone who loves Toronto, and he so obviously does not.”

For Robert Leighton, 51, the protest served as a release for his frustration with the mayor, which he noted was based on Ford’s politics rather than his drug use.

“You can’t beat the catharsis of banging a few things and shouting,” he said.

Doubtful that the protest would directly bring political change, he said it was still important to attend because “it’s better to light a candle, my friend, than curse the darkness.”

Protestor Ali Parrott said, “I just think we need to show the populace’s opinion about everything that’s going on right now, because it seems to me that sometimes we just hear from [Ford’s] supporters.”

During the lunch-hour gathering, Save Toronto volunteers collected signatures for a petition urging city council to action in removing Rob Ford as mayor. Thomas said she expected to receive “hundreds” of signatures throughout the day before delivering the petition to council.

As the crowd began dissipating after 1 p.m., Thomas said she was “very pleased, very impressed, very proud of my city” in response to the turnout.