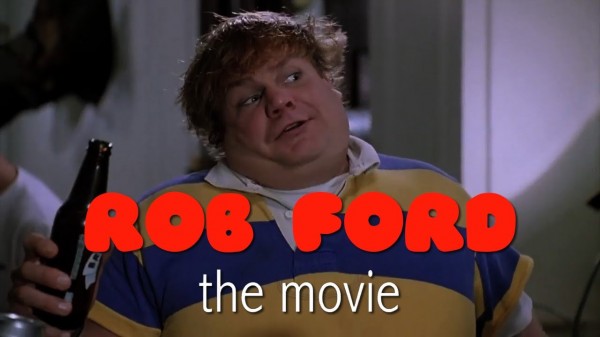 At the root of it, the Rob Ford scandal is no joke. Illicit drugs, police investigations, and extortion are all serious matters. But the whirlwind of controversy circling City Hall has nevertheless given satirists plenty to work with. And regardless of the calamity, it doesn’t hurt to laugh. Besides, when even the City doesn’t have tools to remove the mayor, sometimes it seems like there isn’t much else Torontonians can do.

So with that in mind, here’s Spacing‘s roundup of 10 of the best Ford-related parodies culled from blogs, Twitter, and Youtube. If you think a worthy parody has been overlooked, post it in the comments section.

If Woody Harrelson never gets to realize his dream of playing the mayor on the big screen, this trailer – made from clips of Chris Farley films – might be the closest thing we get to a real Ford movie.

A cut-up hip hop remix of Rob Ford’s crack confession. “Am I an addict? No. Have I tried crack? God bless. It’s my mistake I know, I have no crack left,” raps an auto-tuned Ford in this hilarious spoof.

Taiwanese Animators have been chronicling Rob Ford controversies ever since word of the crack video came out. This parody, a follow-up to an earlier animation, is a comically subtitled video of the police operation to retrieve the crack video.

The mayor has been hitting the gym to get fit, but his exercise routine probably doesn’t involve anything like the feat depicted in this mashup of Rob Ford and Jean-Claude Van Damme.

Doug Ford Truths
Sometimes it’s not a matter of what’s said, but what isn’t.

Texts to Rob Ford
Ford has said he returns every call. But what about text messages? This Tumblr features screen caps of real (and not-so-real) texts to the mayor.

80s Doug Ford
Before the infamy and Queen’s Park ambitions, there was ’80s Doug Ford. Some would argue not much has changed since then.

Hotmail Lawyer
Even Rob Ford’s criminal lawyer Dennis Morris has been given a comic treatment. As Ford is now facing legal action from Toronto Star reporter Daniel Dale, this one is particularly timely.