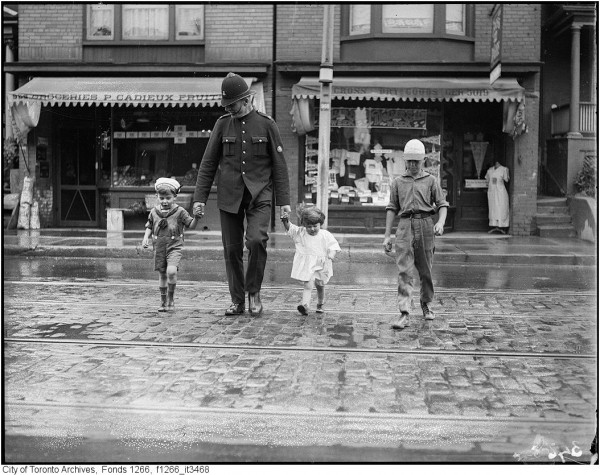 Besides summer barbeques and pledges to keep the streets clean, there’s nothing quite so as predictable about Toronto’s civic elections as the politics of policing.

Right-of-centre candidates either call for more front line cops or issue solemn expressions of support for the police chief as a way of signaling jittery homeowners that they’re not “soft on crime.” Left-of-centre candidates call for more resources for “community policing” to signal progressives that they favour a more preventative approach to combating youth violence in needy neighbourhoods. And occasionally, candidates try to appeal to both left and right by pledging to slash police spending, famously the largest line item on the city’s property tax bill.

Right on cue, John Tory last week gave Bill Blair his full endorsement. Olivia Chow, in turn, came out in favour of community policing, and also  pledged to ban handguns — a move council attempted, without success, six years ago. David Soknacki, meanwhile, began his campaign by pledging to do a stem-to-stern review of the Toronto Police Services’ $1 billion budget to make the force more effective.

Problem is, these promises this time out broadly miss the mark in terms of what Torontonians need to think about when it comes to the police service.

Consider: Blair, whose contract comes up next year, presided over one of the darkest moments in Canadian civil liberties history – the 2010 G-20 – and still hasn’t been called to account for the kettling incidents, the inhumane detentions of protestors, and the conduct of officers who concealed badge numbers and beat civilians peacefully participating in demonstrations.

The TPS, according to extensive investigations by the Toronto Star, went way too far in its use of carding, especially when it comes to racialized youth in low-income neighbourhoods, who tend to be three times as likely to be stopped as white teens.

As I explained in an article I wrote for the The Walrus, a coroner’s jury earlier this winter came out with a scathing indictment of the way the TPS trains it 5,500 front-line officers to deal with emotionally disturbed individuals, following an unprecedented inquest into three shooting deaths. (Dubbed the “JKE inquest,” the coroner’s jury looked into the deaths of three people: Sylvia Klibingaitis, 52, Michael Eligon, 29, and Reyal Jardine-Douglas, 25.)
At some point early in the next term, Constable James Forcillo may go on trial for second degree murder in the shooting death last summer of 18-year-old Sammy Yatim. As a result of that incident and others, the TPS will soon face the recommendations of two separate inquiries on its use of force practices – one by retired Supreme Court of Canada justice Frank Iacoubucci and the other by the provincial ombudsman Andre Marin.

All in, I think it’s reasonable for voters to expect the mayoral candidates to substantively address some very challenging policing issues in this election; after all, the ultimate winner – who, remember, gets a seat on the Toronto Police Service Board – will be expected to take positions on the two use-of-force reports, Blair’s next contract and the specific repercussions of the Forcillo trial, if it goes ahead.

So it’s curious that the best and most specific policing plank to date comes from a candidate who is highly unlikely to win: criminal lawyer Ari Goldkind.

Earlier in the month, he  HYPERLINK “http://www.newswire.ca/en/story/1385785/ari-goldkind-all-frontline-police-officers-must-be-equipped-with-lapel-cameras-by-2016” proposed that all front-line officers be fitted out with lapel cameras – -small CCTV devices, which costs about $700 to $1,200 apiece – that record interactions between police and civilians.

He’s got the issue to himself: a John Tory spokesperson says he has no position on the technology, and Chow told me she hadn’t heard of the devices.

Citing evidence from other cities, Goldkind argues that the lapel cameras, like dash-board cameras and video cameras in interrogation rooms, will encourage individual officers to regulate their interactions with members of the public.

But, Goldkind points out, the lapel cameras aren’t just another electronic accountability tool. In other jurisdictions that have adopted the technology, he says, people who come into contact with the police are less likely to behave in confrontational or intentional provocative ways [PDF]. The upshot: police agencies that have moved to lapel cameras have seen complaints plunge by as much as 60%.

Here are a couple of other angles: The Office of the Independent Review Director, an agency that did the G20 post-mortem, found that lapel cameras during that event would have provided useful evidence not captured on private cell phones.

And the American Civil Liberties Union last year issued a report that found that lapel cameras, deployed in the context of a strong policy framework, would have helped protect the constitutional rights of New Yorkers subjected to the NYPD’s “stop and frisk” program, the Big Apple’s equivalent to our carding policy.

As it happens, the TPS announced earlier this year that it would test lapel cameras in a pilot project, despite reservations from the Toronto Police Association.

The next mayor will be in a position to push for this technology, as well as help the TPSB find the resources to deal with the cost issues (the cameras plus the server capacity), which are not huge but not insignificant, either.

Besides providing more accountability and the promise of fewer complaints, the lapel cameras potentially represent a breakthrough with the TPS’s grave difficulties in dealing with emotionally disturbed individuals, who, as a group, are much more likely to be tasered and restrained than those who don’t suffer from mental illness and come into contact with the police.

Despite the 74 recommendations of the JKE inquest — which echo the findings of numerous previous coroner’s juries that have been asked to probe such shootings – there’s little evidence so far that Blair or the TPS are prepared to make significant changes in the way front line officers are trained to deal with emotionally unstable people (e.g., de-escalating and slowing down volatile situations, and avoiding the use of shouted commands at people who may be hearing voices, etc.)

Lapel cameras, besides their other benefits, could theoretically serve as a training tool: if police cadets and officers doing in-service training have an opportunity to review actual video of interactions that lead to positive, non-violent outcomes, they could learn from peers who are genuinely skillful and empathetic in their dealings with troubled individuals.

From where I sit, Goldkind’s lapel camera policy is a winner — a humane, common sense proposal that all the candidates should move quickly to embrace. As an outspoken challenger from the political fringes, he may not be wearing the chain of office when the new council is sworn in next December. But if the winner has promised to press the TPS to equip all of Toronto’s uniformed officers with these devices, Goldkind will have earned a place of honour in the city’s civic life.