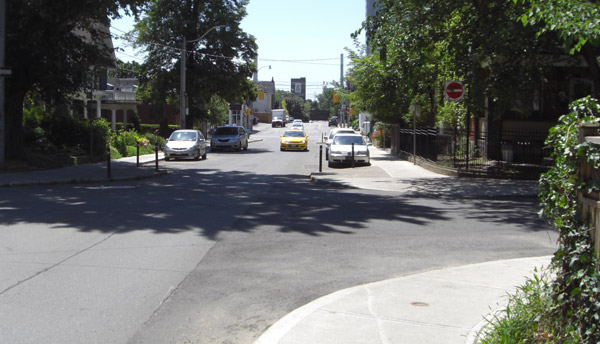 “Slow zones” — neighbourhoods where the maximum speed limit is 30 km/hr (or 20 mph in the US/UK) — are becoming popular in various cities around the world. New York and London have introduced them in selected areas, and Paris is going one better and plans to make them the default in most of the city. Here in Toronto, Walk Toronto (of which I am a steering committee member) is asking candidates to support them, and mayoral candidate Olivia Chow has made them part of her platform.

The rationale for slow zones is that pedestrians are far less likely to be killed or seriously injured by cars going at 30 km/hr. At faster speeds, the likelihood of death goes up rapidly. As well as safety, slow traffic means that residents will feel more comfortable walking routinely, allowing their children to walk or cycle to school, and even building social connections with their neighbours across the street (as shown in a famous study by Donald Appleyard (PDF)).

In Toronto, individual streets can apply to have a 30 km/hr speed limit, if they pass a series of tests and criteria (PDF) and have majority local support. If accepted, a street will normally be required to have speed bumps installed to physically slow traffic. Speed bumps have various disadvantages, including the fact that they are not popular with the Fire or Emergency Medical Services deparments.

But that is just for an individual street. Slow zones are intended to encompass an entire neighbourhood, but it’s hard to imagine installing speed bumps across a whole area like that. Fortunately, there are many other, less intrusive ways to slow traffic. I’ve written about them before, but here I’d like to explore an example here in Toronto.

Logan Ave. between Gerrard St. and Bain Ave. is not officially a slow street. The speed limit is 40 km/hr. In practice, however, I walk and cycle that street quite a lot, and few cars drive this stretch at much more than 30 km/hr. The slow speed is thanks to a combination of well-placed bump-outs, parking, stop signs and street surfaces. It’s an example of how a “slow zone” neighbourhood could effectively slow speeds without using speed bumps.

A key to the effectiveness of this stretch is that the traffic calming is slightly different at each intersection, which force drivers to manoeuver and change their alignment slightly every block. That helps to keep drivers alert and cautious as they move through, even if only subconsciously. I have no idea if these variations were put there intentionally, or just happened by coincidence, but they do the trick and provide useful ideas for future slow zones.

I’m going to break it down step by step to explore how it works. The stretch begins right after Gerrard, where Logan becomes a one-way street going north. 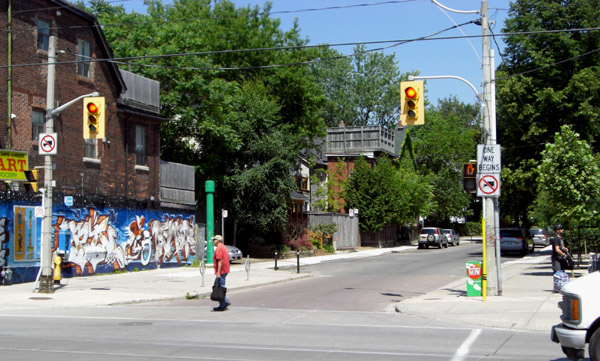 Two elements help to signal to motorists that this is a place to drive slowly: first, the street is narrowed by a long sidewalk bump-out, and second, the street is paved with brick, a bumpier and aesthetically warmer surface, along the bump-out area.

The street on this block is quite wide, so it is narrowed by having parking on both sides. The parking on the right is not set apart with a bump-out, so cars have to take a moment to manoeuver around it. At the end of the street, it is narrowed again, this time with bump-outs on both sides. There is no actual stop sign here, but most drivers slow down when approaching this intersection. 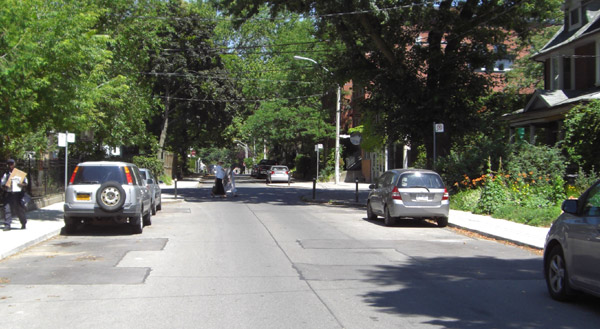 The other side of the intersection has a traditional one-sided bump-out that defines the parking lane. 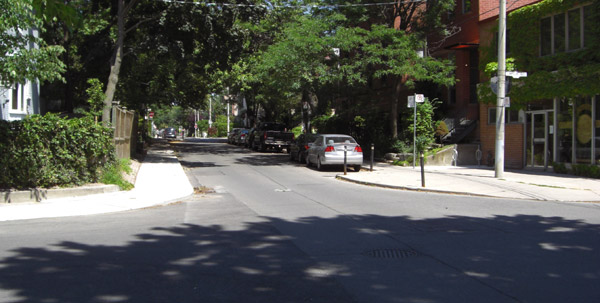 At the next intersection, at Victor Ave., this usual pattern is mixed up a bit. Instead of having the bump-out at the north end of the block framing the parking lane, as is usual, it come in from the left. Cars therefore need to do a little manoeuver to the right, while watching out for the parked car on that side, to position themselves to cross the intersection. 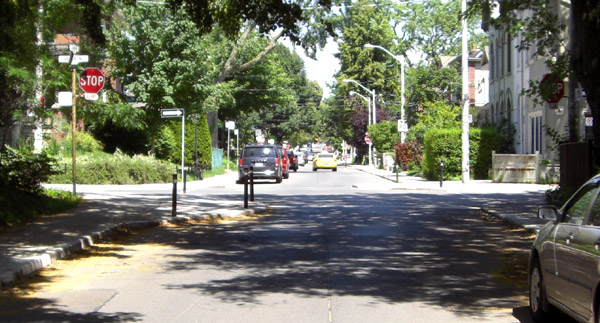 Then, on the north side of the intersection, there’s an even bigger psych on drivers. The bump-out is on the right, the opposite side from the one on the south side — but the parked cars are on the left, on the side of the road the bump-out is feeding cars to. That means the driver is led to manoeuver slightly to the left to get around the bump-out, but then again slightly to the right to get in the driving lane, through a space made narrow by the parked cars (and this is a stretch on which there are always parked cars — many residents have permit parking on the street). 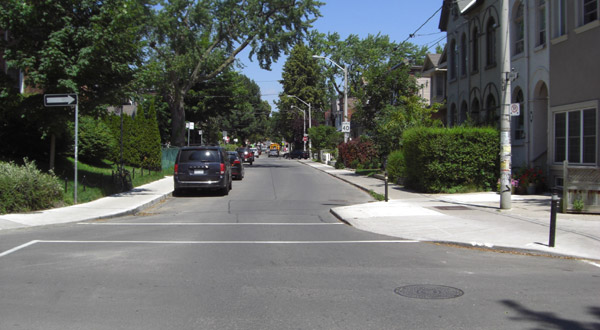 Once in the driving lane, the driver can see that they are headed towards another bump-out on the driving side (as well as a stop sign) at the next street, Langley Ave., so there’s no reason to speed up. Again, the driver has to shift off the straight line through a narrow gap between bump-out and parked car, and then shift back again on the other side.

The next intersection, at Riverdale, is more conventional, but the driver again has to shift slightly to a different line.

But the driver is, once again, driving towards a bump-out, and at Withrow has to change their line once again. Again, they can’t do so until the end of the block because of the parked cars. Withrow does not have a stop sign, but instead has a pedestrian crossover requiring the driver’s attention. It also has brick paving, which along with the bump-outs creates a kind of shared street effect, encouraging drivers to watch out for pedestrians. 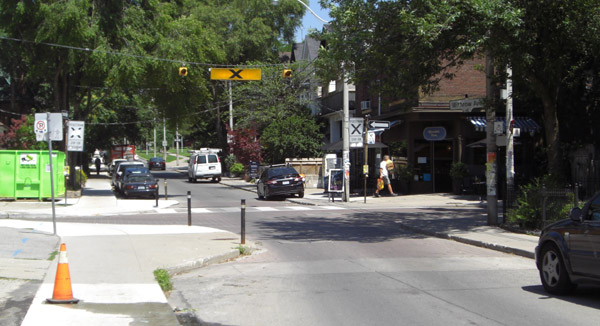 It is interesting that Withrow and Logan is one of those rare areas in the interior of a Toronto neighbourhood that still sustains some lively commercial life, with a cafe, variety store and pet supply store. It has a bit of a village square feel. 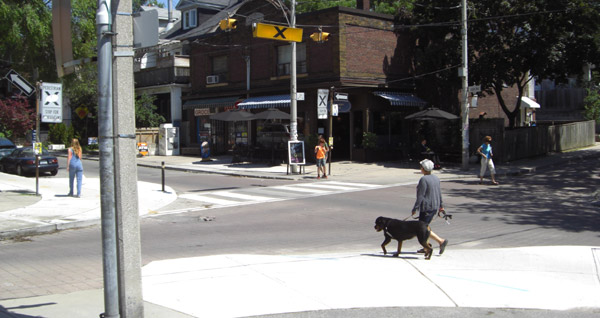 This slow stretch ends at Bain Ave., after which cars climb the hill beside Withrow Park.

The use of bump-outs and parked cars to keep drivers on their toes and force cars to change their line regularly is kind of a modest version of the Dutch woonerf street concept, in which parked cars, trees and other obstacles force cars to slow down. Woonerfs generally have extremely slow speeds (walking pace, 7 km/hr), but to slow cars to a brisker 30 km/hr a gentler approach seems to be enough.

This is also a great street to bike on. It is an official northbound bike route. It doesn’t have street markings, but it doesn’t need them. The changes of direction have little impact on a narrow bike, but the very slow traffic along with still having plenty of room on the roadway make for a very comfortable, safe cycle.

Logan Ave. provides a valuable model for what could be done to slow streets in full neighbourhood slow zones. The use of bump-outs and alternating which side of the street parking is on is simple and effective. It’s also, unlike speed bumps, unobtrusive — not something drivers will register all that consciously, but will still respond to. Where blocks are very long, the bump-out and parking-side shift could be done in the middle of the block.

One aspect worth noting is Logan Ave.’s one-way nature, which makes these additional features more necessary. In the central Toronto residential streets that are only 7.3 metres wide with both parking and two-way traffic, cars already tend to slow automatically because there is barely room to pass another car coming the opposite direction.

In parts of the city where there is not so much street parking, it might not be possible to rely so much on parked cars as a calming device, but there are lots of other possibilities.

Whether or not these variations were intentional or just coincidental (if anyone knows, please make a comment), Logan Ave. is a useful case study of how relatively subtle measures can create an effective slow zone.