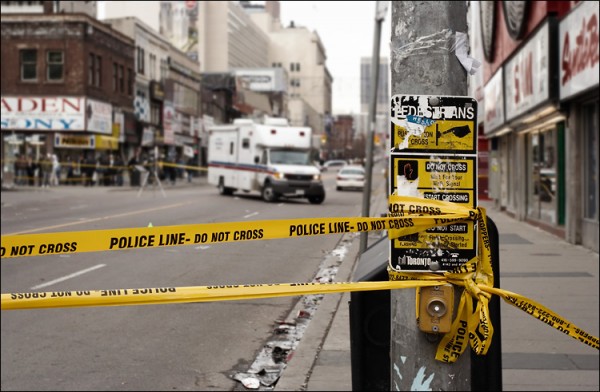 In less than a year, tens of thousands of tourists, sports fans, and athletes will descend on Toronto for the 2015 Pan Am and Parapan American Games, a $2.5 billion showcase event that brings to a close the city’s 20-year search for an international sporting event.

The Games will bring publicity and hundreds, if not thousands, of media, and it has spurred construction on the West Donlands and other locales. But there will be another, and far less positive legacy, although its precise dimensions won’t be known fully until next summer.

That legacy will be the impact of the Games’ whopping $239 million security budget — a topic that has generated zero discussion during the current election campaign, but is almost certainly worth closer inspection, given the fact that the next mayor will be the de facto host of the event, and, in all likelihood, a Toronto Police Services Board member.

While the budget is far smaller than the security outlays for the Olympics in Vancouver and Sochi, the Toronto 2015 security outlay grew well beyond what was initially projected, and includes an $81 million contingent of private security personnel, in numbers not seen in these parts since the G20 in 2010.

Security was a top-of-mind concern — and a highly visible presence — at the 2011 Pan Am Games in Guadalajara, Mexico, with senior officials expressing fears about violence related to the country’s fight to contain the drug cartels.

Will there be a similar show of force here? Unlikely, although it’s difficult to predict how the ever-widening ISIS threat will intersect with this kind of event (I feel confident, however, that security officials in Ottawa are thinking about the risk).

More likely, the Pan Am will serve as merely another excuse for the police to harass homeless people, street addicts, or others in the east end who aren’t wanted in the beauty shots of the city. In the run-up to the Vancouver Olympics, the city’s police force stepped up patrols in the Downtown Eastside, although the feared deluge of negative international publicity about the area’s notorious injection drug scene never materialized.

If anyone harbors doubts about the grave risks facing homeless people living in the vicinity of the Games’ marquis events, a powerful and disturbing new documentary, “What World Do You Live In?,” depicts the rough treatment meted out by the Toronto Police Service during and after the G20 to a community of people who live in shelters or on the street and seek refuge at The Sanctuary, a mission on Charles Street.

Directed by veteran filmmaker Rebecca Garrett, the documentary — a must-see for those interested in Toronto’s policing issues — will have its world premiere at The Royal on October 9, at 7 pm.

As long-time sanctuary activist Doug Johnson Hatlem, who produced the film, told me on Friday, “there are already people talking about what Pan Am is going to mean for them.” The sweeps that happened before the G20 and at all these sporting events, he says, represent a “clear and blatant decision to make the city look better by cleaning up the rabble. There’s a lot of fear in the Sanctuary community about what it’s going to mean for them: more ticketing, and more arrests.”

And, possibly, brutality: Some of the film’s most wrenching scenes involve interviews with the friends of Chris Gardian, an alcoholic man who died in 2011 after being arrested and beaten by several Toronto cops behind an east end store. No one was charged. (The documentary also features an interview with a woman in her 80s who was roughed up by police, seemingly for loitering near an ATM.)

These incidents have tended to receive less media coverage than the spate of highly publicized shootings of distressed individuals with mental illness, which were the subject of a triple inquest, a major review by the Toronto Police Service, and an ongoing inquiry by the Ontario ombudsman into use-of-force guidelines. After the release of the review, by former Supreme Court justice Frank Iacobucci, TPS chief Bill Blair pledged to implement training and organizational changes that will help the front-line police officers better recognize individuals who are suffering from mental illness/addiction issues and are in the throes of a crisis.

But one of the documentary’s most thought-provoking themes is the case for less policing, and in particular fewer calls to 911 in response to individuals, especially those on the streets, who appear to be in crisis mode. Too often, those calls can lead to violence and the criminal justice system as opposed to the sort of help that people dealing with substance abuse or mental illness actually require.

Interestingly, mayoral candidate Ari Goldkind, who is a criminal lawyer and knows these issues through the experiences of his clients, came out late last week with a “peace of mind” policy platform that picks up on the message in Garrett’s film. He’s calling for council to re-allocate $15-$20 million in TPS funds to create a network of non-police mobile mental health teams – psychiatric nurses, residents, social workers, etc. — that can be dispatched to respond to people in emotional crisis instead of police. (Goldkind also says council should establish a mental health committee, and undertake an audit of local mental health services to identify gaps.)

Like the filmmakers, Goldkind argues that the presence of uniformed, heavily-armed police officer often serves to escalate a tense situation instead of defuse it. “Police are woefully ill equipped to deal with these issues,” he argues. “This is a medical problem, not a police problem.” And, as Goldkind points out, “Once you enter the criminal justice system, even a police computer, the future outcomes for that person will be problematic.”

He acknowledges that his proposed solution doesn’t address situations where an individual may be armed or pose a threat to himself or others. But Goldkind’s broader point is nonetheless compelling: how, he asks, did the police come to be the social workers of last resort? It’s an excellent question.

At a time when crime rates are plunging and politicians of all stripe are vowing to reign in the city’s massive police budget, the issue of what de-policing actually looks like, operationally, is a critically important conversation for the city to have, especially as we await — with justified trepidation — the arrival of next summer’s multi-million-dollar security extravaganza.