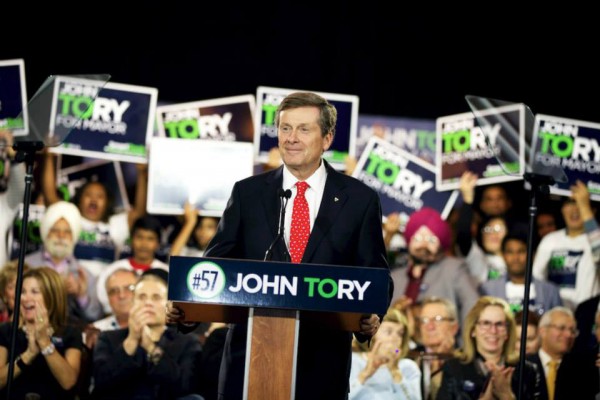 Toronto’s last two mayors, though polar opposites, both began their terms of office almost identically — with short, crisp council meetings designed to deliver on a defining election promise that ended up defining not very much at all.

At his first full session, David Miller rallied enough votes on council to kill the plan to build a bridge to the island airport — a symbol, he told voters, of corporate cronyism and the old regime’s indifference to neighbourhoods. (Porter Air and the Port Authority promptly embarked on a work-around.)

At his inaugural session, Rob Ford delivered on his campaign pledge to rescind the loathed vehicle registration tax — a symbol, he told voters, of council’s spending problem, as well as a burr under the saddle of honest, hard-working driver-taxpayers. (Council subsequently approved fee/fare increases and slashed budgets to compensate for the lost revenue.)

So prepare for a bit of a break with tradition. Unlike his predecessors, mayor-elect John Tory hasn’t got a gift-wrapped deliverable to offer up to the voting public to demonstrate his electoral commitment.

Instead, he’s got a wildly complex $8 billion transit scheme that will keep the consultants, the engineers, the planners and the cash flow gnomes busy for years to come (he said seven, I’ll predict at least ten). What’s more, he’s got to quickly dispatch teams of trusted emissaries to Markham, Mississauga, Queen’s Park and the federal government, all with strict orders not to come back empty handed.

Indeed, Tory’s gamble during these early innings will be all about the ‘how,’ and his opening moves are likely to reveal whether he actually is the focused, decisive chief executive whom he presented to voters during the race, or merely a schmuck who over-promised and is destined to under-deliver.

According to the National Post, Tory plans to stack the executive committee with pro-Smart Track politicians, which won’t be difficult, although some of council’s most experienced transit veterans – the sort Tory should be turning to for insights on delivering transit projects — may find themselves excluded.

During that first session, I’m guessing, Tory will seek some kind of high-level council resolution that commits the City to pursuing Smart Track with a pledge of skin in the game provided the other orders, and the two regions where the line will terminate, also commit to boarding his train. The resolution, I predict, will be dressed up in Tory’s One-Toronto rhetoric/branding, while the substance will be about commissioning various studies and reports. The resolution, I suspect, is going to contain aggressive language around timing, which means the bureaucrats will be asked to minimize consultation and bring back recommendations as quickly as possible (late spring for the first tranche wouldn’t surprise me).

As for the council vote, I expect Tory will be looking for big numbers, because he knows he’s got to demonstrate unassailable unity of purpose to the other orders, in the same way that Mel Lastman sought a unanimous endorsement of a Toronto 2008 Olympic bid soon after he took office, in 1998 (he came within one vote).

So if Tory’s got any tactical savvy whatsoever, he’ll be running a horse-trading operation out of his provisional City Hall headquarters between now and early January, trying to get the skeptics and even waffly opponents on side with promises of special projects, appointments and other, um, considerations. After all, a narrow margin of victory on that opening resolution will give Tory’s many fiscal dance partners an excuse to hesitate and his opponents an opportunity to crow. Indeed, in the absence of any specific action, like the cancellations of the bridge and the VRT, what he’ll need out of the gate more than anything else is the twinned illusion of momentum and resolve. Captain of the H.M.S. Toronto, at the wheel, etc.

From there, the whole operation deep dives into a netherworld of detailed studies and backroom, inter-governmental bargaining. According to Liberal strategist John Duffy, who advised Tory on transit during the campaign, the city or Metrolinx need to complete a ridership study that assesses the network effects of a Smart-Track service. Similarly, one of the two agencies must also complete a business case analysis, which is now — but not in the past — a pre-condition to new transit projects.

Lastly, Duffy says, the city’s planning and finance officials will have to drill down into Tory’s tax-increment financing pledge, while also looking at other ways of capturing a portion of the anticipated increases in tax assessment that may occur along the corridor.

Meanwhile, the City and Metrolinx are going to have to figure out how to mesh the Smart Track planning process, which Tory will initiate in early January, with the Regional Express Rail planning, which has been underway for months and involves a much larger canvas (the entire GTA, Hamilton and Kitchener-Waterloo).

The zillions of details are daunting — acquiring rail spurs for GO use, choosing train technology, planning new corridors — and may directly impact 905 and 519 constituencies, a political wrinkle that could blow up in Kathleen Wynne’s face if she’s not careful (her government, for example, has been playing footsy with Waterloo Region for almost a year, pledging all-day/two-way service).

There’s no doubt that Tory, Wynne and Metrolinx chair Rob Prichard are having a mind-meld about SmartTrack. But as the dual track planning process around the relief line (TTC/Metrolinx) proved, bureaucrats in rival institutions can find themselves at loggerheads, even when there’s consensus at the political level.

Finally, Tory’s early moves on the federal front may well be the most significant in terms of the long-term viability of his promise, but they’ll also be the most difficult to detect with the naked eye. One of Tory’s top aides, Vic Gupta, has long-standing connections to Treasury Board president Tony Clement, and of course Tory himself is exceedingly well connected in local Conservative circles.

But he also knows that a federal election will happen within a year. Duffy points out that the Conservatives’ income splitting promise from last week didn’t soak up the entire federal surplus. Which is good news for Tory, in that Smart Track depends on $2.6 billion in federal contributions (as a bracing point of comparison, Ontario’s share of the ten-year Building Canada Fund is just $2 billion). Other provinces also want more infrastructure funds, adds Duffy.

Question is, will Tory, with all his Liberal backers, transform SmartTrack into an election wedge, with the spoils (and price tag) going to the highest bidder? Or does he bet on a third Harper victory and focus his lobbying on one counterparty?

All this, and much more, is going to characterize Smart Track’s first year of existence. As electoral mandates go, it simply doesn’t get any more complicated.