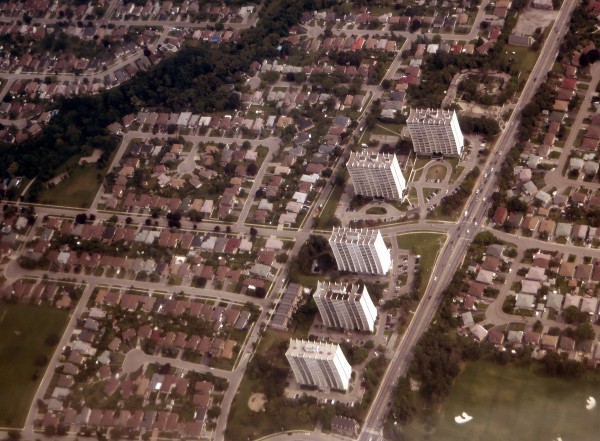 Toronto Life this month is running a cover profile about the inner suburbs. The article sought to expose the divisions within our city, but it ended up depicting the inner suburbs as little more than a failed segment of our society, in need of saving:

“The downtown and inner suburbs,” according to the magazine, “are now like two worlds: one alive and optimistic, a promised land of gleaming, modern glass towers and four-star restaurants, the other spiraling into poverty.”

Featuring ten anecdotes about Torontonians across the inner suburbs who recount their lived experiences, the article proceeds to present a narrative of our city which typecasts the residents of the downtown core as the haves, and those of the inner suburbs as the have nots. In other words, it not only lumped the former municipalities of Etobicoke, Scarborough, East York, and North York into one general category; it also stigmatized all these neighbourhoods as low-income spaces grappling with gun violence, crumbling infrastructure and immigrant struggle.

Some of these stories offer cautionary tales about the personal impact that bad decisions or the precariousness of the menial end of the job market, can have. Others recount the trials and tribulations of building community in areas like Dixon, Jane/Finch, and Lawrence Heights – all areas plagued by gun violence.

While these stories should celebrate the resiliency of leaders in those communities, they instead depict the inner suburbs as helpless, victimized, and in need of charity.

We need to be mindful of how we frame these narratives since the language we choose evokes a particular framework. Those perspectives in turn shapes how we think about our city and the specific experiences of certain communities.

Arsema Berhane, one of the subjects of these stories, went on Twitter to lament the way her experiences were framed:

“This article and how it came to be is actually how #TorontoIsFaillingMe. At no point during the various conversations I had with the staff did they mention that the story I shared would be part of this series…The response to the murder of my beloved brother was an outpouring of love, support, and random acts of kindness from across the city. At no point did we feel that Toronto failed us!”

While I laud Toronto Life for taking an interest in the plight of those who live across the subway track, the magazine told the story in a way that feeds directly into the familiar media narrative about the inner suburbs, and which Toronto Life claimed it wanted to avoid: vertical poverty, under-resourced schools, immigrant struggle and gang warfare.

Is Toronto responsible for the over-crowded schools that resulted from Mike Harris era cuts to education, and which have yet to be replenished by the Liberal government? Did Toronto fail to ensure the safety of these neighbourhoods, or are gangs a symptom of the high youth unemployment? Who is failing whom?

The problem that I have with this feature is twofold: First, it paints a singular narrative of the inner suburbs, and provides insufficient analysis as to why things are the way they are. Second, it is unjustifiably alarmist:

“If the issues of neighbourhoods like Dixon aren’t addressed now,” the article states, “they could escalate into a situation like the Ferguson riots. No one will give you a better reason to work toward One Toronto than that.”

Is Toronto Life saying we should ‘fix’ the inner suburbs in order to avoid social unrest? This kind of alarmist rhetoric merely undermines the capacity of the inner suburbs. Rather, we should seek to remedy inequitable access to opportunity and mobility within our city because people deserve better regardless of their social status, income, and neighbourhood, not out of fear of what they may do, if we don’t.

We need to stop talking about Toronto’s inner suburbs as if they were monolithic and interchangeable. The neighbourhoods in these former municipalities are as economically diverse and disparate in lived experiences as those in any other city.

The inner suburbs, just like the downtown core, are complex spaces comprised of countless overlapping stories. For example, Rexdale is often portrayed as a community plagued by gun violence and poverty. But it is a diverse area that encompasses neighbourhoods such as Smithfield, which has one of the largest concentrations of subsidized housing in Toronto, as well the historic village of Thistletown, which is comprised of cottages built in the early 1900s and the post-war bungalows of The Elms.

The danger of the single story, as novelist Chimamanda Adichie wrote, is that “they show a people as one thing, as only one thing, over and over again and that is what they become.” The singular narrative of Toronto’s inner suburbs, as places plagued by violence and poverty, is one that risks critical misunderstanding.