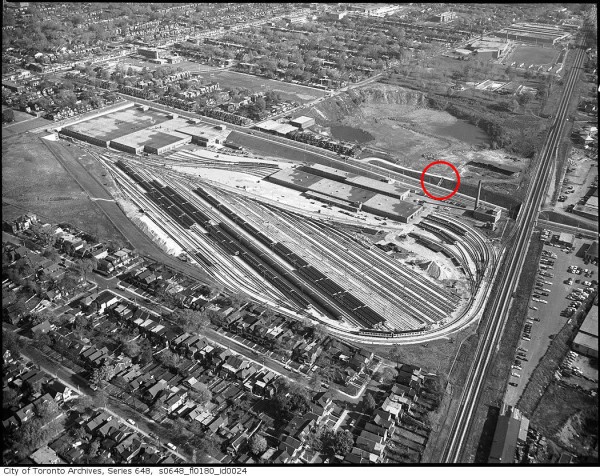 The Greenwood stairs (circled) in 1964. The brick yard has been demolished, but the old access road still remains, hinting at the steps' original purpose.

There’s a set of stairs on Greenwood Avenue that lead nowhere. At the top, a wooden fence at the end of someone’s back yard blocks any further movement, forcing the climber to turn around and descend back to the street.

What’s remarkable about the pointless Greenwood stairs, which were built in 1959 as a shortcut to a now-demolished brickyard, is that someone still routinely maintains them: in winter, some kindly soul deposits a scattering of salt lest one of the stairs’ phantom users slip; in summer someone comes with a broom to sweep away leaves.

These urban leftovers are lovingly called “Thomassons” after Gary Thomasson, a former slugger for the San Francisco Giants, Oakland As, Yankees, Dodgers, and, most fatefully, the Yomiuri Giants in Tokyo. 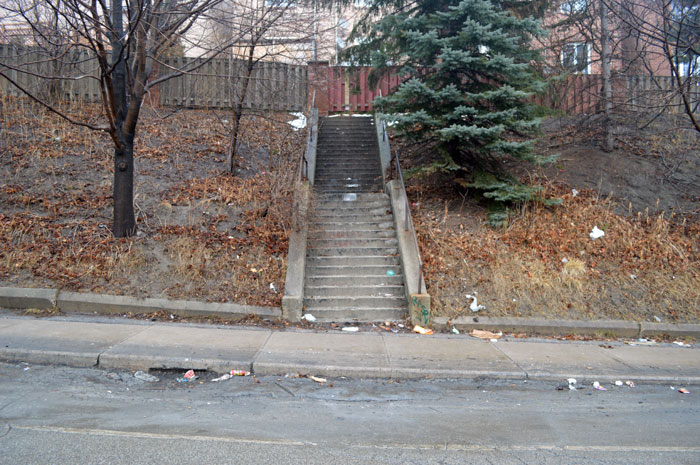 The stairs on Greenwood Ave. The snow had recently melted leaving behind piles of unsightly garbage.

After being traded to Japan from the U.S. major leagues in 1980 and signing the biggest contract in Nippon League history, Thomasson spectacularly lost his mojo. He set a league record for strikeouts in 1981 and spent much of the next two seasons on the bench. In 1982, a knee injury put a lid on the struggling player’s career for good.

Thomasson’s inglorious final years might have been forgotten if it wasn’t for Akasegawa Genpei, a Japanese artist who around the time of Thomasson’s struggles had become interested in urban relics like the Greenwood stairs. In 1985, Akasegawa published a book called HyperArt: Thomasson that collected examples from around Tokyo. He called them Thomassons after Yomiuri Giants’ expensive bench warmer because he too was “useless” yet “maintained.”

Akasegawa now admits appropriating Thomasson’s name was a touch harsh, but, regardless, the name stuck.

Back in Toronto, there are stairways to nowhere in the Junction where Dupont St. passes under the rail tracks, and the relics of lost highway cloverleafs in the Don Valley. On Queens Quay W., near where the streetcars emerge from the underground ferry docks stop, there’s a large rectangular hole in the Harbour Square complex where a walkway should have been installed.

But Thomassons are just one type of urban relic. Near Queen and Bathurst there’s Kemp Ave., a mysterious street that no-one seems to know very much about and may not actually exist.

In 2014, while writing a piece about private streets in Toronto, the city provided me with a copy of their centreline file—a list of every street in the city, its geographic location, and ownership status. Kemp Ave. was listed as a private street—one of many in the city–but what’s most unusual is that it simply doesn’t seem to exist.

On further inspection, the avenue turns out to be little more than a short unpaved laneway behind a row of houses on Robinson St. There’s no city sign marking it as Kemp Ave., yet Google and Bing Maps both list it as such. After knocking on a couple of doors, it appears even the neighbours aren’t sure where the name came from, or who owns the laneway.

According to the National Post, Kemp Ave. is just one of dozens of “orphaned laneways” in downtown Toronto. A 2012 city study, the Post says, found 27 of them, including a nameless U-shaped Parkdale laneway that’s fallen down a bizarre bureaucratic loophole (no-one claims to own it and the taxes haven’t been paid since the 1890s.)

Kemp Ave.’s days are numbered. An employee from the City’s Geospatial Competency Centre — the division responsible for keeping track of our geography — says after checking by-laws, plans, and property addresses, staff have decided to scrub Kemp from their records. “When the open data is refreshed Kemp Ave. will no longer be there,” the employee said in an email.

Because Google and Bing source their map data from files maintained by the City of Toronto, it’s likely the next update will kill Kemp for good—if it ever really lived.

One possible explanation for the bizarre life and death of Kemp Ave. is that it was a trap street—an error deliberately placed by cartographers in an attempt to catch plagiarists.

Although map makers tend to keep quiet about their fakery, there have been a few notable cases of trap features being discovered. In London, England, a pedestrian passage called Broadway Walk was deliberately mislabeled “Bartlett Place” by the makers of the A-Z, a popular printed map of the city.

Slightly closer to home, the wholly fictional town of Agloe, New York started appearing on maps produced by the General Drafting Company and distributed by the Standard Oil Company of New York (now Esso,) starting in the 1930s. Like a trap street, the town was meant to alert the company to unauthorized uses of their work if it ever appeared on a competitor’s product. The name was created by mixing together its inventor’s initials.

Unfortunately for the General Drafting Company, Agloe became real. In the 1950s, a fishing lodge in its supposed location along a highway in the Catskill Mountains began using the name. Agloe later appeared on later maps by Rand McNally, Esso, and even Google, which once happily provided driving directions to the semi-fictional locale. Now, however, the town appears just as a rough geographic area.

Google wouldn’t say if Kemp Ave. was trap street. If it is, it’s not a very successful one.

What ever its provenance, the death of Kemp Ave. has already begun. It’s already been erased from the City of Toronto’s official map.