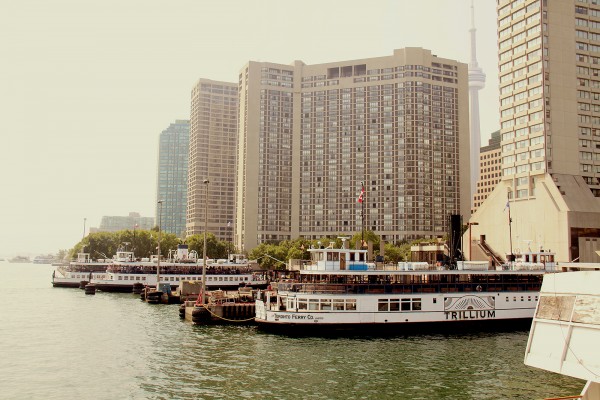 Maybe it’s the unending winter, but the five short-listed submissions for re-designing the Jack Layton Ferry Terminal/Harbour Square Park site — made public last week on Waterfront Toronto’s blog — left me feeling cold, and I’ve been trying to unpack the sources of my crankiness about the results (so far).

When I look at these elaborate, but admittedly conceptual, proposals, I see a set of ambitious ideas that will easily cost tens of millions of dollars, and probably more. Despite that, neither the City nor Waterfront Toronto have breathed a word about how much might be spent on this ostensibly transformative undertaking.

With all due respect to the more optimistic reviewers who’ve weighed in so far, I don’t accept the premise that brilliant architectural visions will magically unlock the public treasury. Architects may believe they possess that great power, but reality lies elsewhere, and there’s much evidence to confirm my conclusion.

The money question is not incidental, and shouldn’t be treated as such, especially when the waterfront is facing other extremely costly infrastructure outlays. How does the [insert two-to-three-digit number here] million dollar ferry terminal/square plan impact the budgets for the Queen’s Quay LRT ($800 million and counting) or the Don Mouth naturalization ($950 million and counting)? Both will depend heavily on development charges, so does the terminal/square revitalization expenditure come from Section 37 funds, or Section 42 parkland improvement reserves? Or will it compete for dollars with these other undertakings? And if the latter, how will we prioritize? Because we should…

Maybe I’m being simple minded, but no one has explained why we didn’t begin with a number and a time-frame, even rough ones, and then ask interested design firms to develop ideas based on ballpark budgets/phasing schedules.

With the exception of one proposal that actually succeeds in diminishing corridor views to the waterfront, the pivotal design assumptions in the rest of these plans is that the tragically-situated tunnel entrance to the two Harbour Square parking lots (one surface, the other a stacked garage) next to the terminal access path be (re)moved, relieving a long-standing obstruction.

Poof! Done. That was easy. Let the crowds flow in unimpeded….

My question is whether anyone at the City or WT has seriously canvassed the engineering/staging/traffic flow problem of relocating the most obdurate feature of that precinct (besides the buildings themselves)? The street wall on the south side of Queen’s Quay along that stretch isn’t exactly awash in alternative locations. And even if there were viable locations, do we know if the property manager/residents will play ball?

The WT fact sheets on the 11.4-acre site reveal little about this point, but I imagine that such an undertaking would involve a lot of cost and disruption. As with the global budget, this isn’t a small problem. It’s a big problem, and it seems to me that WT/City officials should be cautious about raising public expectations without having a reasonably clear sense of what’s logistically possible.

Here’s another fundamental question that should be sorted out in a serious way: is the terminal/square precinct a destination or a portal? As I look at the short-listed plans, it’s clear the design teams want to remake that zone into a destination that happens to contain features that allows people to travel elsewhere (to the island, or along the lake front).

All five teams pack their proposals with new uses. Indeed, they’ve thrown in all manner of features  — hot tubs, floating pools, wetlands, fish habitats, art walks, jazzy terminals full of places for beautiful people to lounge laconically. All the submissions, in my view, drastically over-program this relatively constrained space, and I’m not persuaded the area demands so much additional activity, given its primary function.

At the risk of making an over-literal observation about the Photoshopped images in these submissions, not a single one realistically depicts crowds of hot and harried families en route to the island. It’s a rather staggering oversight.

Crowds aren’t a steady-state issue, of course, but they do represent the maximal use condition, and so whatever we do down there must accommodate big, sweaty clumps of people. And let’s also talk about who’s in those crowds. Not just the sort of hipster avatars that populate flattering renderings. The crowds include large families of newcomers, with children and grandparents lugging armloads of stuff – strollers, picnic gear, bikes etc. What are their needs? Do they need lots of ambient distractions (mist rooms! palm trees! cocktail bars!), or do they need benches and bathrooms?

Point is, if the precinct is to be remade as a destination with lots of activities as well as a ferry terminal, the design must come to terms with the fact that at certain predictable intervals, it will have to accommodate a lot of additional crowding. And I don’t think these submissions have addressed that reality.

I’d like to propose a ground rule for all future international design competitions: after one ridiculous waterfront master plan submitted several years ago that featured a man-made maple-leaf shaped island in the harbour, any team that includes maple leafs as design elements of their submissions be permanently barred from bidding on Toronto projects.

Again, maybe this is MY mid-March/mid-life irritation, but I found many elements of the proposals to be tone-deaf. Why is there a vehicle pick-up/drop-off loop leading directly to the ferry terminal entrance in the Diller Scofidio & Renfro-led submission? Why are we trying to (re?)-create wetlands and beaches on a former pier that was made out of landfill, and has never had any relationship to the actual shore line? Why would anyone fund a swing bridge over the Yonge Street slip when the foot bridges over the slips further west have proven to be highly effective for pedestrians? And, do we really need to build a “bluff,” as per one submission, or is this merely a rather literal-minded way for the proponent to signal the eventual jury that they did their (online) homework about Toronto’s waterfront?

I don’t mean to be a complete grouch. Some of the teams (e.g., Quadrangle/aLL Design/Janet Rosenberg) did turn their attention to real design issues that Waterfront Toronto actually needs to address — creating improved pedestrian flow between the Yonge Street slip, the terminal/square precinct, and the Harbourfront area west of the York Street slip. And the plans will evolve in response to feedback provided to WT through its surveys, etc.

Yet it seems to me that we’d end up with a far better result if (i) WT and the City didn’t crank up public expectations in the absence of a clear understanding of resources and achievability; and (ii) if the design teams, on the next pass, be provided with much more explicit instructions about what needs to be done.

But they can’t do that kind of analysis in a vacuum. First, we need to figure out what we want from that space. From where I sit, WT and the City shouldn’t be looking to architectural dream teams to come up with answers. It’s not an outsourcing problem.