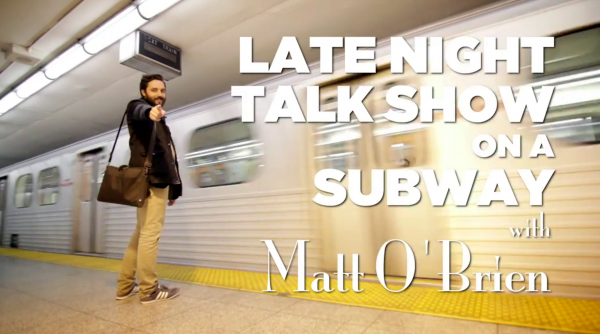 A Toronto comedian is using the TTC subway as the studio for his makeshift late night talk show. Host Matt O’Brien interviews guests on the TTC’s iconic red velour seats as the train whizzes beneath Toronto during three-minute segments called Late Night Talk Show on a Subway. His guests are actors, musicians and fellow comedians. We talked to him about what inspired the unconventional show.

How did Late Night Talk Show on a subway come to be?
I did a bunch of pilots for Much Music and MTV and the executives there asked me what [shows] I wanted to do. We filmed 10 or 12 pilots of different shows. I kept saying I wanted to do a late night talk show. They kept saying there’s no budget for that type of thing in Canada. It doesn’t exist because there’s not enough money to fund something like that in Canada. So I thought all right, I’ll just do it myself. I didn’t have a studio or anything and I was like, well, the lighting in the TTC is pretty good. There’s always a live studio audience, even if they don’t want to be there. I just did it as kind of a goof, the first one, and then people really liked it, even though the questions aren’t real. I’m not doing any hard-hitting journalism or anything but it’s fun. People have a good time with it, so I just kept doing it.

Why the TTC?
I only did it because me and my friend were on our way to a show once. We were looking at the seats and there were two seats and three seats and I was like, wouldn’t it be funny if somebody was sitting in those two seats, interviewing people in the three-seater. That kind of angle, I was like it kind of looks like a talk show and we joked about it. This was five years ago. I quit my day job to do comedy full time and I was like, you know what? I have time so let’s just do it. I don’t have a studio or anything so that’s why I picked the TTC and I thought it would be funny.

How long does it take to film an episode?
Not too long. I usually get my guests to meet at Bathurst station because I feel like it’s pretty central. Maybe an hour? Because the questions are pretty quick and I try to keep each episode to three or four minutes. It’s inconvenient when … the interview’s over but then we just have to ride the subway more together because we’ll be at Kipling. I haven’t explored different subway lines; I usually just go east or west. But maybe in future seasons I’ll go north and south. Who knows?

Ride the union loop? That could shake things up.
That could be a real hot season finale, yeah.

So it’s just you sitting on the subway across from a guy with a camera?
I can’t stress how low budget this is. My camera-guy, Dave Dunville, he even puts the camera under a scarf just to not freak people out. Even though it’s pretty obvious he’s filming; there’s a giant lens coming out of a scarf. The hardest part is waiting for seats to become available because I have to have the three seats and then the two seats as well. So I’ll look like kind of a dick. I’ll have my jacket on one seat. “Oh I’m saving this for my show. Trust me! I need this for my show.” I try to ride at times that it’s less inconvenient for people. It’ll be like at 8 p.m. or 9 p.m. on a Thursday, not during rush hour or anything. And people are usually really cool with it. They see that I’m filming and they’ll give up their seats so I can film a show there. I think I could only film this in Canada. I feel like that’s a Canadian politeness thing.

Any freak outs from fellow passengers?
There’s a lot of crazies on the subway but nothing yet. I almost want to end an episode with a crazy thing. But everyone wants to be filmed, that’s the thing. I’m sure it’ll happen the more I do it but people are usually cool. They’re like as long as you put me in the credits. And I’ll put them in the credits if they’re sitting beside the guest with their groceries or something. There was this woman, Jackie, who was on her way back from the grocery store and I was like, I’ll put you in the credits and she was like, that’s all I want.

Do you have permission from the TTC?
You know how some subway cars have the rules of the TTC? I read through those and I didn’t seem to be breaking any rules. I called the TTC and the woman I talked to initially just laughed at me. I think she thought I was joking. I was like, I’m serious, I want to film this. She was like, as long as you don’t set up a tripod and use it for commercial use. I was like no, I’m just a goof, really. She was like as long as you’re not really disruptive, it’s fine. I’ve had TTC workers come on while we’re filming and they just laugh at it too. So I think they think it’s funny. I would think that’s something they don’t see everyday. They seem really cool with it. I don’t try to be disruptive or anything. If they have any problems I’m more than glad to pay a permit fee or something. They said it’s not necessary, so I’m going to keep riding that wave.

What has the response to the show been?
Everybody seems to like it. I posted it on Reddit the other day and some people were confused. They were like why aren’t you asking real questions, because the questions are stupid. I want the questions to match how stupid the location is. So I’m not asking about where they grew up or anything. Other people are like why don’t you just interview random people on the subway? I attempted that once and the average person doesn’t really have anything to say. So it just got really awkward and weird quickly so that’s why I kind of stick to actors and comedians and musicians and stuff like that.

Is the show scripted?
I write the questions on cue cards and the rest is all improved. I try to script the endings. When I interviewed Dylan Gott, I made it look like I stole his backpack and ran off the subway. That was obviously scripted. But then he started freaking out. He really got into it! He was screaming and yelling and I saw [some] people on the subway…almost touched that emergency strip that you’re never supposed to touch and I was like “no no no, this is all just a thing, relax!”

That could’ve gone really wrong. You would’ve been the most hated person on that train.
It could’ve been terrible. But I would’ve kept filming. I tell my camera guy to never stop filming. It still would’ve made it into the episode.

What’s the future of the show? Are you going to make more episodes?
We’re filming more next week. I didn’t think of this being a real, legitimate show. I just did this as a demo, just to show networks that I can host a talk show. But people are really into it. I’ve been brainstorming other places I could do it. Like, Late Night Talk Show on a ferry or on the streetcar or like a paddleboat. Anything! Late night talk show on a tandem bike. We’d have to do more intros and everything. If we had more funding, we’d do a late night talk show on everything. I’d love to do a tour of subways around the world. Like, go to New York or go to London and just do that. I think there are a lot of options out there for it. Right now it’s just me and a camera guy and some microphones I rent from Long and McQuade.