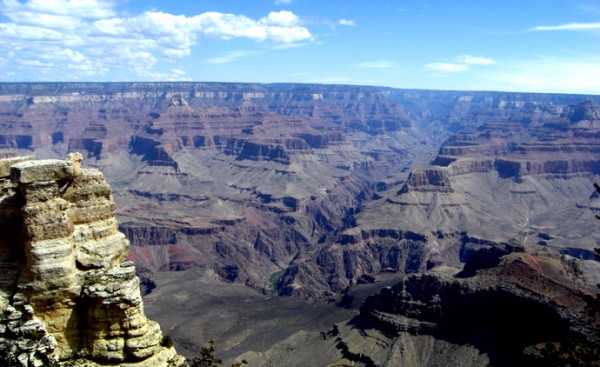 The study of awe — the kind of jaw-dropping experience that makes you recalibrate your understanding of the world — originated with natural phenomena, such as the Grand Canyon. But can that feeling of awe be replicated in the city, too? And what kind of impact does that have on people’s feelings and behaviour? That’s one of the fascinating questions explored by the Psychology on the Street exhibition, currently on display at Urbanspace Gallery in downtown Toronto.

Two separate experiments, based on people looking at images,  established that building interiors with certain architectural elements do, indeed, instill a sense of awe: large, high-ceilinged spaces with repeating elements and ornamentation or art. What’s interesting is that the age of a building also contributes to creating awe, which means that it’s not just a visceral reaction — there can be an intellectual element to the response, bringing the viewer’s knowledge into the equation.

This finding isn’t all that surprising — it’s what one would have guessed — but the study provides evidence to back up this gut instinct.

What really interests Colin Ellard, the professor at the University of Waterloo who is the leader of the project, is how this experience affects humans. As he notes in his new book, Places of the Heart, one way of interpreting awe-inspiring architecture is as an assertion of dominance — making people feel humble in the face of a religion or a state (awe can have a tinge of fear to it). A more positive interpretation of that experience, he notes, would be creating a sense of security — that one is part of a strong, protective institution.

However, research suggests that awe can create other positive — and perhaps more democratic — feelings in humans. It can alter one’s sense of time, and some evidence suggests it can make us kinder to each other and more likely to engage in altruistic behaviour. Exploring the effects of architectural awe on people will be the next step in the project. Another next step will be testing people in a truly immersive experience — either virtual reality or in actual buildings.

Currently, awe is measured through self-reporting, by questions to the people in the experiment. Another stage of research, some time in the future, could be to figure out ways to measure it physically. Does experiencing awe create a measurable response in our bodies and our brains?

When I talked to Ellard, I suggested that another interesting experiment would be to see if public spaces — not the interiors of buildings, but exteriors and cityscapes — can also elicit this sense of awe. I suspect great public squares could have this effect, and also grand vistas like the view from the plaza in front of the Sacré Coeur church in Paris. I also wonder if the built city might interact with natural phenomena at times — sunset/sunrise, storms/lightning, fog — to intensify the effect of awe.

Humans have been building awe-inspiring buildings for millenia, so it seems that, subconsciously, we already understand the power of this effect. Only now is science catching up to try to measure and understand this tool that we have used to shape our buildings and, I suspect, our cities for thousands of years.

Naturally, at the end our conversation turned to Toronto. Do we have awe-inspiring buildings or public spaces in Toronto? We came up with a few suggestions, but I will be interested to hear what our readers think. Remember, it’s not about beauty, but about that sense of being transported.  What, if anything, in Toronto inspires that feeling of awe?

Every Saturday, you can be part of the experiment by taking guided walks (registration required) that will test your responses to different urban environments. You can also download an app that will take you on a self-guided walk testing how you respond to specific kinds of urban characteristics.