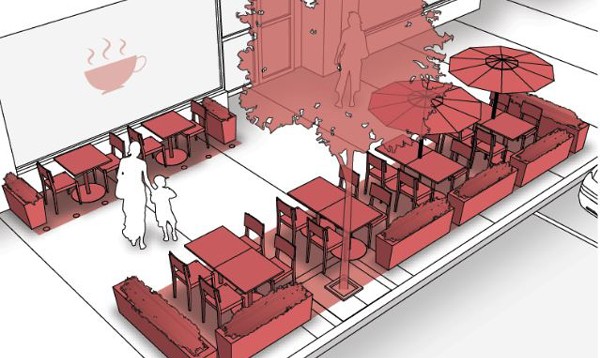 In the current issue of Spacing, I mention sidewalk patios as an example of the dual role of sidewalks, as both a place and a corridor. Patios can have a big impact in creating a sense of place for a sidewalk, bringing life and vibrancy, creating connections between buildings and public space, and providing a destination. But, if poorly placed, they can also interfere with a sidewalk’s other role, as a corridor — impeding movement, especially for people using mobility devices or those with visual impairments who walk with a cane or a guide dog.

The City of Toronto is currently trying to balance these two needs, as it develops a new, harmonized sidewalk patio bylaw for the city (to replace the ones for each of the former pre-amalgamation municipalities). I recently went to an open house where the new proposals were presented (they are available online (PDF) on the City website). These proposals cover sidewalk cafes, sidewalk patios where alcohol is served, and also merchandise displays.

The City’s approach is to require a clear, direct path for pedestrians on sidewalks, but to compensate for any inconvenience that creates for businesses by making the rules for patios a lot simpler and more flexible. For Scarborough, the new bylaw will in fact allow patios for the first time.

Currently, the bylaws require patios to allow a certain amount of clear sidewalk space, but it does not have to be in a straight line. Pedestrians can find themselves negotiating a kind of obstacle course of patio fences, trees, street furniture, and varying pavements, which creates a real problem for accessibility. The new bylaws will require a straight clearway for all pedestrians along the sidewalk, with a standard width (2.1 meters on main streets, possibly more where pedestrian volumes are really high).

However, the new bylaw also allows a lot more variety in how patios are set up. One innovative idea is to give all businesses an “as-of-right” use of their “marketing” zone – a meter-deep strip of sidewalk right in front of their business. Any business will be able to set up a bench in front, or small tables for two chairs, or a little merchandise display, without having to get a permit. Many do so already, of course, but now this will be legal rather than a potential infraction.

Restaurants and cafes will also be able to set up patios in the “furniture zone” of a sidewalk, beside the road, if there is space. And they’ll be able to extend patios to the space in front of a neighbouring business, if the neighbour agrees, or to “parklets” built into permanent parking spaces.

The proposed bylaw also reduces the bureaucracy of patios: there’s more flexibility about the types of materials that can be used; fences will no longer be required for non-alcoholic patios, just defined borders at either end; umbrellas can overhang the sidewalk if they are high enough. When a business is applying for a side patio adjacent to a residential area, it will no longer have to wait for a time-consuming residents’ poll, which are often inconclusive because of low turnout — instead, a notification will be distributed, and only if there are objections will a dispute resolution process be triggered.

The businesses represented at the open house I went to seemed to think this was a fair exchange, although the response may have been different elsewhere. It’s also possible there might be a stronger reaction when, eventually, some existing patios have to be redesigned. On the flip side, there are probably some details that need to be refined in terms of assuring accessibility. Finally, once these more flexible rules are in place, it would be good to have better enforcement to ensure accessibility, as the current rules are often ignored.

Overall, the proposed policies seem to go in the right direction, both making it easier to establish patios that bring vibrancy and a sense of place to the sidewalk, while also making sidewalks work better as safe, accessible corridors for people to walk.

If it meets its goals, the new bylaw will help add to the approximately 710 licensed patios currently contributing to the liveliness of the city’s sidewalks — and perhaps even introduce a few in Scarborough for the first time.