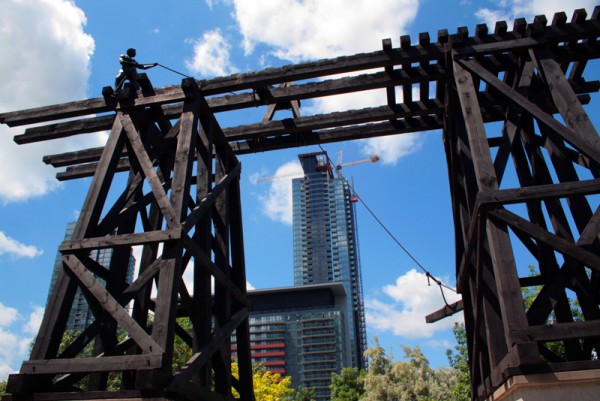 Public art has a storied past in Toronto’s History. The City of Toronto’s public art collection stems back to the late 19th century, with early pieces such as the Canadian Volunteers War Memorial by Robert Reid in Queens Park appearing in 1870. Since then, the process for securing and determining public art in Toronto has changed significantly – but the interest and willingness to do public art far precedes formalized policy. Terry Nicholson, Director of Arts and Culture Services at the City of Toronto, reminds us that early examples of public art were driven by civic and philanthropic interest.

“Back then the city did not commission public art; it was usually a group of citizens who would come together and rally, raise funds, and then hand it over to the city. That was basically the pattern until the 1960’s.”

Before the City got involved, upper level governments used public art as a means to support Canadian artists through select infrastructure projects (i.e., The Macdonald block at Queens Park). The first commissions in Toronto came in 1977 before the opening of the TTC’s Spadina Subway line in 1978. The commissions, by the then Metro government, were significant in both opening up the process to multiple media, such as interactive art (i.e., Michael Hayden’s Arc de Ciel) and expanding the territory for public art to transit. Soon after, public art tied to private development emerged with the commercial development boom in the City’s financial district.

“Public art from private development really started with office buildings in the mid-1980’s that had huge courtyards out front and provided an obvious spot for it,” says Nicholson 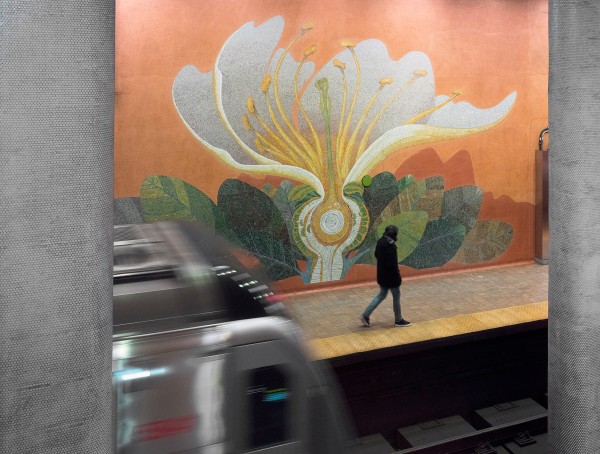 The ‘percent for public art policy’, which states that 1% of capital project costs on private development projects go towards public art’, was instituted in 1986*. This was followed by the inclusion of public art in the official plan in 1991. But up until the early 1990’s, public art was largely negotiated on an ad-hoc basis. For instance, the TTC commissions were secured with no formalized policy, and public art secured from office tower development did not occur through the re-zoning process, but as a separate negotiation.

The early 90’s was a time of growth for public art in Toronto – the first Canadian city to incorporate public art in its official plan. Jane Perdue, public art coordinator for the City of Toronto, credits key advocates who were instrumental in encouraging the city to think about integrating pubic art into Toronto’s built environment.

“People like Ken Greenburg and Mary Lynn Reimer looked to programs in the United States to see how public art policies could work for the former city of Toronto…and people like the late Thomas Hendry (Toronto Arts Council) and artist Robert Jekyll who would make strong deputations at City Hall about the importance of public art,” Perdue remarks. 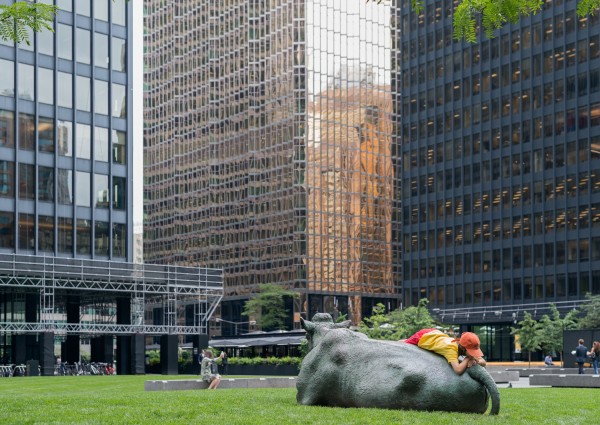 Nicholson credits two privately-funded public art pieces in the mid 1980’s that expedited the need for a real policy framework. First, the Canadian Airman’s Memorial on University Avenue by Oscar Nemon and ‘the monument to multiculturalism’ by Francesco Perilli located in front of Union Station. Both projects were one-off deals with politicians, private citizens, and philanthropic partners, and both engaged artists from outside Canada. While valuable in their own right, these works drew the ire of the local art community who demanded more structure in determining how public art gets selected. It was then that the city was feeling pressure to formalize the process, according to Nicholson.

“I think you had to nail down the process side, before commissioning could happen”

Starting in the early 1990’s, public art was put in the Official Plan and secured through a formal planning re-zoning process (i.e., Section 37 of the Planning Act). Throughout the 1990’s, more oversight separated the regulatory and curatorial aspects of public art. Now, every public art contribution secured through private development follows a formal process, which includes a public art plan and a review by the Toronto Public Art Commission (TPAC) – a voluntary group that advises on private development projects. Today, City Planning oversees private developer commissions, while the Culture division is responsible for looking after public art secured for off-site purposes, as well as public art secured on city-owned lands. In addition to the ‘percent for public art policy’, the City currently funds (1% of capital costs) public art through its own (large) capital projects. Beyond these tools, there is no annual budget to commission public art. Toronto currently houses approximately 230 works of art in its public art and monuments collection, and Nicholson estimates the total (public and private) collection is around 500.

Toronto’s policies have brought significant public art pieces to the city, but mostly to areas experiencing growth. The creation of public art is directly tied to the development process, which means areas outside of the downtown do not reap the same benefits. Perdue notes distributing public art equitably remains a challenge, and existing policies (i.e., Section 37) tied to the Planning Act do not allow the City to transfer public art from one area to another. Additional avenues could be pursued, such as the capital budget process, which Nicholson says presents an opportunity to lay out a plan for areas lacking public art.

“You have to pinpoint through a planning process key locations that could really use a work of public art and then commission one a year for the next 10 years. You could probably get that approved. It’s a big exercise, but it’s doable.”

Besides equity, current policies can be inflexible in terms of the types of public art that can be secured. Temporary or durational work cannot be secured under the Planning Act, which states that public art secured as a public benefit (i.e., through Section 37) must be permanent, an area Perdue says the City is not willing to push changes on.

Additional challenges lie on the enforcement side. More public art also means ensuring works gets look after and remain in the public eye.

“We have to make sure the art remains visually accessible…many condominiums want it in their lobby, but that is out of public view,” says Perdue.

Once a building is built, the ownership is transferred from the developer to the condominium board to oversee ongoing maintenance. Perdue says the City does not have the right to tell individual condo boards what to do public art on the site of their building.

“we have a clause that allows developers to set aside funds for maintenance, but this is tricky to enforce once ownership is transferred to the condominium.” 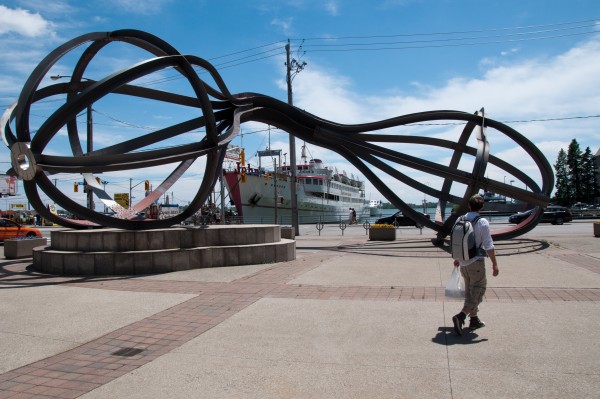 The City’s policy framework has enabled the private sector to make an impressive contribution to public art over the last two decades, but Perdue says the public sector needs to make its own policies work harder on civic projects.

“I would love if the city were more active in securing public art in capital projects; more art that the city commissions on its own buildings and parks. We do this, but we could do more,” says Perdue.

The process to secure public art over the past 150 years has become more formalized, and in doing so has brought benefits to the public, but also to artists, says Nicholson.

“There are younger artists that now see public art as a viable part of their practice, whereas in the early days it was only senior artists who had the wherewithal to get commissions.”

Nicholson goes on to say that “really good works make you pay attention towards where you are. Artists look at the world differently. And that is something to be cherished. It is important that we are challenged in the way we look at things and public art does that; it’s not just utilitarian.”

While the benefits of public art may be clear for some, Perdue reminds us there is ongoing work to be done in selling the value proposition of public art among City staff.

“it’s a matter of working with various departments and convincing them of its worth; sometimes you are dealing with people who have not done it and have not seen its value.”

For now, the City has no plans to alter its policies as the steady stream of development applications keeps providing public art opportunities. Nicholson says a discussion about the future of public art policy would likely occur when development slows.

“If we get to a point where development slows down, that may provide an opportunity to take stock of where public art is and where it is going.”

Jeff Biggar is a PhD Candidate in Planning at the University of Toronto. Interviews were condensed and edited for this story.

[2] “Spadina Summer Under all Seasons” (1978) by James Sutherland, Located in the Dupont Subway Station. Photo by Matthew Monteith

[4] “Between the Eyes” (1990) by Richard Deacon, Yonge St. and Queens Quay. Photo by Alexandre Moreau, licensed under the Creative Commons Attribution-Share alike 2.0.