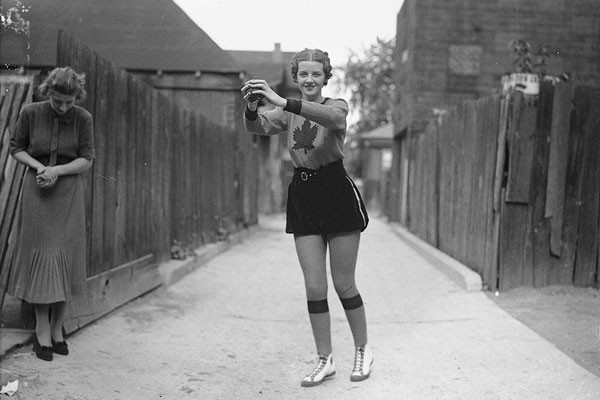 Women have been playing baseball for as long as anyone can remember. And for much of that time, they’ve been playing despite the men who’ve tried to keep them off the field. In baseball’s early days, women were told they were much too fragile to swing a bat or field a grounder. Even Al Spalding, founder of the National League, said that women were welcome to sit in the stands and cheer for the men — but that was it.

“Neither our wives, our sisters, our daughters, nor our sweethearts may play Base Ball on the field,” he declared. “Base Ball is too strenuous for womankind, except as she may take part in the grandstands, with applause for the brilliant play, with waving kerchief to the hero of the three-bagger.” As if playing shortstop were somehow more physically demanding than, oh, say, giving birth.

Luckily, many women ignored that poor, Victorian advice. And when you look through the oldest photographs in the Toronto Archives, you’ll find plenty of women already there, playing baseball on diamonds all over our city. They were forming their own teams and their own leagues, drawing their own big crowds.

By the time the end of the 1930s rolled around, even Miss Toronto herself was getting in on the action.

In 1937, the winner of the annual beauty pageant was a teenage softball pitcher from the Beaches. Billie Hallam’s grandmother convinced her to enter the competition. And so, on a hot Saturday afternoon in July, she raced down to the Exhibition Grounds in her swimsuit, where she would parade before a panel of judges and 20,000 spectators. When Hallam was announced as the winner, the Mayor of Toronto presented her with a sash. She was only 17 years old, but in heels, she was already taller than he was.

That night, as the new Miss Toronto, Hallam was due to appear at a celebratory banquet at the Royal York Hotel. But she had business to take care of first. She rushed straight home from the pageant to change her clothes. From there, a police escort rushed her through the streets to Kew Gardens, where her ball team was playing a big game. She cheered them on from the bench in her evening gown, and then raced back downtown to the banquet.

The next morning, she woke to find the press knocking on her door, eager to interview the city’s newest beauty icon. One journalist asked a version of the same question men had been asking for years: should women really play sports? Hallam’s answer was pretty much the exact opposite of what Spalding had said decades earlier. “[T]here is nothing like exercise and sport,” she told the reporter, “to make a girl a real lady.”

The next time she returned to the mound, a crowd of more than 10,000 people was there to see her pitch — the most ever for a game at Kew Gardens. At one point, she even did a photo shoot wearing her uniform. You can find those photos in the Archives, too.

Hallam was far from the last Toronto woman to make her mark in the baseball world. More than 10% of the players in the famous All-American Girls Professional Baseball League — the league from A League of Their Own — were actually Canadian. In real life, the star of the Rockford Peaches wasn’t Geena Davis, it was Gladys Davis, an interior designer from Toronto. Today she’s in the Canadian Baseball Hall of Fame and part of a display in Cooperstown.

Decades later, when the Blue Jays brought Major League Baseball to town, The Toronto Star‘s Alice Gordon made history as the first woman to cover an MLB beat. And she did it in the face of misogynist discrimination from many men in the game, including some of the Jays’ own players. When the team travelled to Texas, the Rangers banned all reporters from the clubhouse just so they wouldn’t have to let her in.

We have, of course, come a long way since then. Today, there are countless women writing about the game. This season, Jessica Mendoza is breaking new ground as a broadcaster with ESPN’s Sunday Night Baseball. And on the field, players like Mo’ne Davis are making history, too. But we still have a long way to go. We were reminded of that just last week, when Blue Jays manager John Gibbons claimed that a new rule is making the sport less manly. “You know what, maybe we’ll come out wearing dresses tomorrow,” he complained. “Maybe that’s what everyone’s looking for.”

Well Gibby, Billie Hallam proved it nearly 80 years ago: you can sure as hell wear an evening gown and still be a damn fine ballplayer, too.

Photo of Billie Hallam via the Toronto Archives.