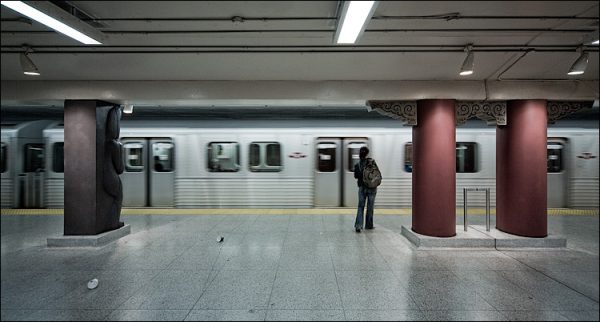 This week, city council approved a motion by Kristyn Wong-Tam to review city services “to eliminate any existing bias against women” and ensure that budget allocations promote equity and women’s empowerment.

The TTC, as it turns out, will provide an early example of whether the City is going to be serious about this new approach to planning and delivering services.

When it comes to serving its customers equally, the TTC must address the disproportionate harassment women face on public transit. In the first five months of 2016, 35 sexual assault complaints have been reported to the TTC, compared to 56 for all of 2015 and 67 in 2014.

The physical constraints of being harassed while trapped in a transit vehicle forces riders to evaluate their surroundings: Am I close to an exit? Can I pull the emergency alarm? Will my response provoke a violent reaction? Will the perpetrator memorize my route or follow me home?

Earlier this week, the TTC announced it would develop a new app to combat harassment, thereby adding another question to a commuter’s environmental scan: Can I safely reach for my phone?

The app should roll out by the end of 2016 and is part of a broader pledge by the TTC to audit its safety procedures using a gender lens. The app in particular will allow users to report harassment in real time, along with their location. It will automatically shut off the flash and camera sound on a smart phone, allowing users to report incidents with discretion. The app will work on all surface vehicles, of course, but only at all subway stations as of late 2017, when the wifi roll-out is complete.

The question is whether the promised audit will lead to long-overdue safety improvements for the TTC’s most vulnerable customers, or if we will continue to leave the road to safer services undefined?

Women are disproportionately impacted by harassment and sexual assault, and also make up 57% of the TTC’s overall ridership. Given the over-representation of women in part-time and precarious employment, many rely on the TTC for its affordability, or have no other choice but to use transit, despite lingering safety concerns.

Existing safety mechanisms can and do fall short. As journalist Hillary Di Menna described in her own story of TTC harassment in The Toronto Star, she feared that pulling the emergency alarm would leave her stuck with her harasser until help arrived. Concerns like these prompted the TTC to search for an alternative.

Reading accounts like Di Menna’s, I found myself wondering what I would do in her position. Would I have had the presence of mind to accurately assess my environment or send a report via smartphone? Or would I, as I have been socialized to do in the face of a threat, avert my eyes, try to remain still, and hope that the episode does not escalate further?

The variables requiring split-second assessment in these moments explain why bystander intervention is so key.

When Di Menna was approached by a much larger man who began making inappropriate sexual advances, no one on the crowded Friday evening train said a word. She got off the car, the man followed her, she got back on, was followed by him again, and then finally managed to escape with her third attempt.

In February, according to a report in the Toronto Sun, Meg Campbell witnessed David Zancai (better known as Toronto street staple “Zanta”) scream at fellow female passengers, while other onlookers pronounced the exchange was “entertaining” and did nothing. And when a Muslim woman, Sundus A., was accosted with violent, Islamophobic insults on the Thorncliffe Park bus last winter, no other passengers spoke up, the CBC reported. Sundus wanted to get the driver’s attention, but felt trapped between the other passengers who had failed to speak up for her.

TTC spokesperson Brad Ross says that other transit agencies use similar tools to address harassment, emphasizing that riders should report these instances as much as possible so authorities understand the scope of the problem (there’s a concern about the under-reporting of . such incidents). While the new app could be a useful means to collect data on TTC harassment, the onus should not be placed on victims or bystanders alone to gather the details, or take action in these encounters.

The TTC, and the municipality as a whole, must bear the responsibility to keep our city safe. Earlier this week, as TTC CEO Andy Byford discussed the new digital tool with reporters, headline after headline suggested that women’s safety would be a key priority at Monday’s TTC board meeting. While the commission agreed to review the transit system with a “gender-specific lens” to “address safety concerns of women and women with disabilities,” the motion passed without any further explanation, discussion or even questions. Ross could not elaborate on how the “gender-specific lens” will be incorporated into the review.

One suggestion: The TTC should pay attention to whose expertise informs the proposed safety audit, and how its parameters are defined when the findings are presented in December.

After all, incorporating this kind of language into transit discussions is important, but we’ve heard this rhetoric before. In August 2014, for example, the Toronto Women’s City Alliance (TWAC) lobbied to add a provision to Toronto’s Official Plan to ensure “the safety of vulnerable groups such as women.” Since that 2014 move, however, there have been no clear updates on how these guidelines are implemented by city planning committees.

In the past, the TTC has actively responded to women’s safety concerns in moments of crisis, as the new app aims to do. The Request-Stop program dates back to the Paul Bernardo attacks in the late 1980s, and transit experts worldwide often point to Toronto’s leadership in this area.

But the real challenge is also ensuring that safety isn’t just about responding to crisis incidents.

In 2014, for example, city council approved a deal allowing Astral Media to sell ads on TTC bus shelters that block clear sightlines at certain angles. Anti-violence experts made deputations on the arrangement, explaining how the change would increase transit users’ risk of theft, assault and harassment. Despite that, Astral’s amendment was still successfully adopted.

Those who champion issues such as women’s safety are often individual activists or groups with limited resources like the TWCA and METRAC (Metropolitan Toronto Action Committee on Violence Against Women). The motion tabled at Monday’s TTC board meeting was first proposed by disability advocate Terri-Lynn Langdon. The push to apply a “gender-specific lens” echoes the work of the TWCA, whose members have been advocating for years to evaluate municipal policies using a gender equity framework. While the efforts of these community groups brings valuable insights to the table, their limited staff and funds means they need committed partners at City Hall to push their vision forward.

Many have pointed to the lack of female leadership at the TTC as an obstacle. Only 15 % of TTC employees are women and nine of its ten board members are men (there is a current motion at council proposing gender parity on city boards).

Representation is important, but we also need to push our leaders to move beyond parity as just a symbol. The intention behind gender parity is to bring diverse perspectives to the table – but these perspectives should be a part of planners’ every day work, not just at board meetings. The new app proposed by the TTC is one idea. But imagine if the imperative to design safer cities and vital services such as transit was a consistent priority.

Abby Plener is a student in Ryerson’s masters of journalism program. Follow her on Twitter at @ajplener.