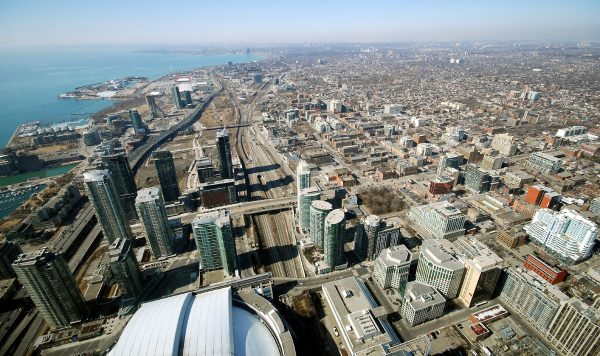 About two years ago, deputy city manager John Livey, Toronto’s top planner, realized the strategy of creating pocket parks and little private plazas around the core wasn’t going to dent the severe shortage of open space downtown. With rapid population growth due to intensification, especially west of Yonge and south of Queen, the city needed to make a big, bold gesture. (The core’s population is projected to reach 500,000 within 25 years.)

The preliminary results of Livey’s lightbulb moment were revealed during yesterday’s Rail Deck Park press conference, although the excited rhetoric about a new central park overshadowed the hard slogging that got us here. According to the area councilor Joe Cressy, Livey’s officials scrutinized a handful of key issues: the ownership of the air rights, the cost, and the technical feasibility.

The air rights, above the 27-foot level, belong to CN Rail, Toronto Terminals Railway and Metrolinx; city officials have determined that they can be acquired. But with developers actively exploring the possibility of privately buying air rights over the corridor, Cressy says council’s key move, when a staff report surfaces in September, will be to approve an official plan amendment designating the entire space above the tracks as open space.

The plan, as my colleague Kieran Delamont explains here, is going to be very expensive, even allowing for the large and unused parkland acquisition reserves that Spacing investigated last year in our “Parks in Crisis” series. Cressy contends that both the province and the feds may put money into the project. But this ask is merely the latest in a long series of big ticket asks, not least of which is the $1 billion flood protection berm that will unlock development on the Portlands. (Let’s not even talk about transit.)

Which brings me to Downsview Park. Those of you who dimly remember the early years of Jean Chretien’s Liberal regime may recall that two of his loyal foot soldiers, Art Eggleton and David Collenette, persuaded the prime minister to donate the decommissioned air force base to the City, alongside similarly high-minded pledges to establish it as Canada’s first national urban park (whatever that means).

Yet after a few years of high-end architects conjuring up fancy visions, it became clear that no one was prepared to put out to actually build the thing, at which point Canada Lands Corporation, the ultimate owner of the land, began cleaving off parcels at the edges for re-development with an eye to using the proceeds to build the park. The idea of encircling a large park with higher density buildings is actually sound planning, but this cross-subsidization strategy was accomplished in an ad hoc and haphazard way. There was more than a little disingenuousness from the various powers that be, and plenty of anti-development yodeling from Maria Augimeri, the local councilor.

From where I sit, the detail to watch as the Rail Deck Park plan moves ahead is whether city council will, in fact, vote to make the entire space public and open, or whether the suburbanites on council push for the Downsview-style self-financing model.

Three other facets of this story seem relevant with the plan now up for discussion:

Ultimately, council needs to think very clearly – always a challenge! – about the long game here. We shouldn’t get distracted by tourist bauble words (“Central Park”!) or fantasies about Millennium Park style doodads. The Rail Deck Park proposal is a smart and far-sighted response to one of the increasingly severe symptoms of Toronto’s addiction to extreme intensification. As such, it holds out a glimmer of hope that those impersonal glass towers brimming with 600 sq.-ft shoebox units may someday evolve into stable communities, with all the broader social, economic and health benefits associated with such urban neighbourhoods.

Toronto has a long tradition of nibbling away at good ideas until they become pointless or nonsensical. Let’s resist the temptation to gnaw at this one.