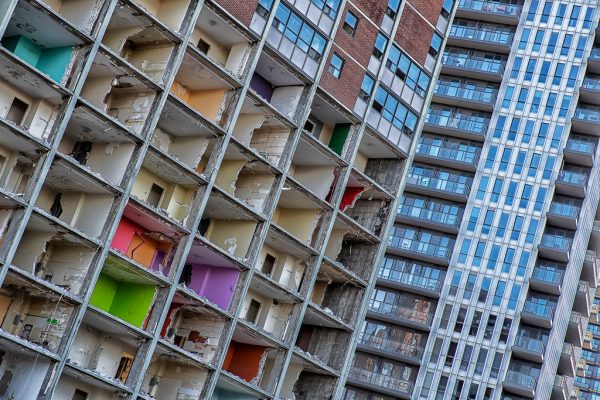 On and off since the early 1990s, when Paul Martin and Joe Fontana concocted an impossibly progressive policy agenda that became Jean Chrétien’s Red Book, the federal Liberals have nursed a fantasy about returning to the glory days of the activist national housing policy of the 1970s, when mortgage subsidies stoked the construction of hundreds of thousands of co-op apartments across Canada.

In government, however, the party found many excuses to kick that policy can down the road. The dream has re-surfaced with Justin Trudeau’s Liberals, as evidenced most recently at last Friday’s housing confab in Regent Park, when several big city mayors, including John Tory, made a pitch to earmark $12.5 billion of the next $20 billion tranche of federal infrastructure funding to social housing.

The event, make no mistake, was one of those carefully staged-managed affairs meant to whip up political demand — and thus public pressure — for a policy that Ottawa kinda-sorta-maybe wants to implement. The asks were pre-negotiated and fit seamlessly into the “Let’s Talk Housing” fall consultation (it runs until October 21) initiated by minister Jean-Yves Duclos, who was in attendance.

Don’t get me wrong: I’m glad to see this degree of engagement, and what seems — so far — like an authentic attempt to translate a targeted election pledge into actual policy.

My concern, however, is that whatever policy and money emerges from this process won’t fully address the stubborn, but enormously important, riddle of why private investors won’t finance moderately priced rental apartment buildings in urban markets where there’s huge and growing demand for the same.

And unless the feds, the provinces and big city mayors figure out how to untangle this knot, the Liberals’ reforms will never be more than half a loaf.

I’m under no illusion that there’s a magic bullet here: the flow of real estate-directed investment capital is subject to macro forces — historically low interest rates, the state of the Canadian dollar relative to other currencies, monetary and banking policy, etc. — that defy the political will of even large national governments.

Finance minister Bill Morneau’s announcement today that the feds will plug a loophole allowing non-Canadian buyers of residential real estate to claim the long-standing capital gain deduction on a principal residence may cool the highest end of the speculative re-sale market.

But if we’re going to head down this road, I’d say it behooves the participants to seriously ask why so much capital flows into a commodity investment we call a one-bedroom condo apartment, as opposed to the hundreds of large private multi-unit rental apartment buildings that were developed in the 1950s and 1960s.

To have that debate, of course, municipal officials have to begin speaking honestly about precisely what they’re doing by approving the sky-high condo towers that now dominate the planning discourse in big cities. As is becoming increasingly clear, many of these projects are evolving into de facto rental apartment buildings, with units owned by investors who never had any intention of occupying them. Developers market them as investment vehicles, and even buyers who plan to live in their apartments often buy them with no intention of long-term residency.

In other words, the city’s overall supply of mid-range rental units — both those in conventional apartment buildings and newer condo towers — is increasingly determined by a particular sort of investment opportunity, one that affords a high degree of liquidity and benefits from a set of tax and legal rules that make those units more attractive to investors than conventional apartment buildings.

One is the aforementioned capital gains exemption. But regardless of whether they’re owner occupied or rented, condos, which are treated as single-family residences, enjoy a property tax rate advantage over conventional rental apartment buildings (where the property owner pays the aggregate tax bill and passes that cost on to tenants as part of their rent).

Multi-unit apartment buildings in the City of Toronto in 2015 were taxed at a rate that was 2.45 times higher than residential properties, which includes condo apartments. That differential, as this table shows, has narrowed over the past decade and a half, but it’s still significant. When most of the shoe-box units in high-rise condo towers become rental units, as seems likely, those buildings in the aggregate will be paying a lot less property tax than a comparably scaled conventional apartment building, and that, to me, is a tax fairness problem that could be skewing investment flows.

(I would predict, too, that property management companies will emerge that handle traditional landlord responsibilities in large condo buildings as sophisticated investors consolidate and expand their portfolios of rental units at a given address.)

There’s another elephant in this policy room, which is that the long-term decline of investor interest in multi-unit residential apartments roughly coincides with the introduction of the laws that established condo ownership, as Maclean’s pointed out in a 2014 feature. “Condos made up less than 10 per cent of all homes built in our 10 largest cities before 1981, but more than a third of those built in the last decade—around 413,000 out of roughly 1.2 million new homes.”

Some recent reports point to renewed interest in multi-unit residential projects by patient investors like pension plans (although many of those projects are higher-end rentals). It seems to me that if governments want to fully address both affordable housing supply issues and housing affordability for low- to middle-income earners who don’t qualify for subsidized units, decision-makers have to figure out how to adjust the policy levers so much more investor capital flows into multi-unit projects as opposed to condos.

Does that mean equalizing the property tax rates between residential and multi-unit residential? It’s a controversial idea. Yet even without the mess in the condo speculation world, the fact that tenants pay proportionally far more in property taxes — and tend to have lower participation in local government decision-making — is a scandal that should have been confronted years ago.

Here’s another thought: the province, in its ongoing review of its GTHA growth management policies, is proposing to step up the intensification targets municipalities must achieve in order to remain in compliance with the law.

Let’s actually name what this policy objective achieves: it’s not just about land use; the province’s imperative to intensify delivers a massive financial windfall to condo developers and investors. So my question is this: why shouldn’t the province dictate, as it can, that a certain proportion of those intensification targets be achieved through the development of purpose-built multi-unit rental projects?

After all, if government land use regulations confer an enormous benefit on the builders (and investors) of a certain form of high-rise building, why shouldn’t they do the same with another form of high-rise structure? Indeed, if Queen’s Park was more prescriptive with its intensification targets, the Places to Grow Act could deliver critical socio-economic benefits as well as environmental ones.

And since we all seem to be in lock-step on the housing file these days, the feds could amplify those moves by re-creating the tax incentives that spurred so much investment in private, mid-range multi-unit rental housings in the 1960s.

In other words, if government policy actually sought to confront the real reasons why investors aren’t backing large apartment buildings at a time when demand for decent mid-range rentals is soaring, we’d have a full suite of fixes — not just publicly-funded construction, but renewed private investment as well.

I believe the big city mayors and Jean-Yves Duclos when they say they genuinely want to “talk about housing.” But to have that debate properly, they’re going to have to address the entire continuum, and that means confronting the extreme distortions wrought by the condo market in its current state.

Otherwise, this exercise is going to be just more talk, but little change.