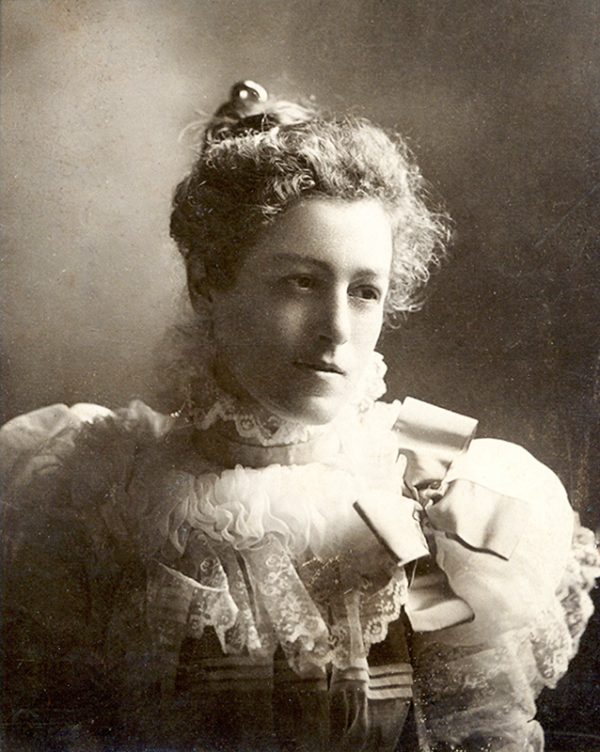 Last year Spacing published an audit report that found 292 Toronto parks were named after men, with just 82 after women. Coupled with streets, monuments and public buildings named after men, there’s quite a public space gender gap in Toronto. The Friends of Fort York hope to change that as they’re campaigning to get a new neighbourhood school named after Jean Earle Geeson, a teacher, artist, journalist and early champion of the fort. Read her impressive biography below, and if you too feel Geeson is deserving of her own school, ensuring her name lives on publicly near the fort, you can make a quick online submission on the TDSB site here with your naming request. (Full disclosure: I’m a volunteer director on the Friends’ board.)

The following collaborative piece was published in the July 2016 issue of Fife and Drum, the Friend’s of Fort York’s quarterly newsletter: 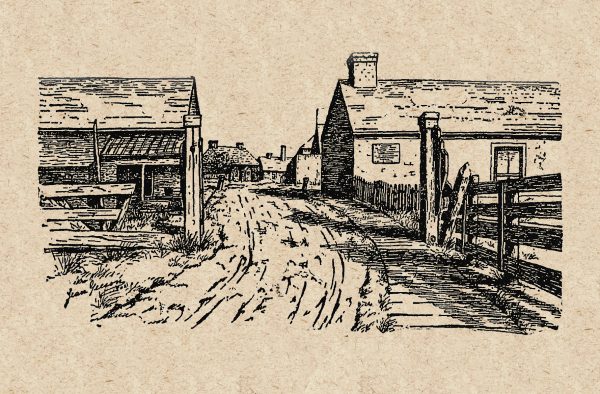 Jean Geeson sketch. The Western Entrance shows the two 1815 Brick Soldiers’ Barracks, then housing non-commissioned officers and their families. Posted on the building on the right and clearly visible is a newly-installed historical plaque sponsored by the Canadian Club of Toronto and paid for by the Minister of Militia. Today it is on display inside the Fort York Visitor Centre. The whereabouts of an identical tablet mounted at the Eastern Entrance of the fort are unknown. Credit: The Globe, 4 July 1903

The Friends of Fort York have always seen names as a way to give a sense of special place to the area around Fort York. We have been consistent, starting with Fort York Boulevard, our main link with the city. Were it not for our efforts and advice from Councillor Joe Pantalone, that part of the street west of Spadina Ave. might have been known as something else. During 2003 we sat on a committee for the better part of a year to cut down a list of several dozen names for other local streets to ten that were taken forward by Councillor Pantalone for council’s approval. Bring on Bastion and Bruyeres through Gzowski and Sloping Sky! Rather than honour June Callwood with a mere street, it was our idea to call the small park south of the fort for her. We then took things further by inviting her to the fort for lunch one day to tell us how she saw ‘her’ park being used, which guided the subsequent competition for its design.

In 2007 council responded positively to our proposal to rename the Bathurst Street Bridge in honour of Sir Isaac Brock. And while this new name has been slow to come into use, the rebuilding of part of the structure scheduled for 2018 may be the perfect moment to use its decade-old, new name. We await the designation of the park north of the Fort York library, now carrying the working name “Mouth of the Creek Park” as “Lower Garrison Creek Park” when it is developed and opened.

Which brings us to a suggestion we put forward first in 2004: that the fort’s early champion, Jean Earle Geeson, be honoured locally, perhaps by the naming of the neighbourhood school when built. A formal proposal to this effect has now been made to Ausma Malik, Toronto District School Trustee for Ward Ten (City Wards 19 & 20), when the school planned for Fort York Blvd. between Bathurst and Spadina opens in 2018/19. It is supported by the biography below, and seems to us entirely fitting. 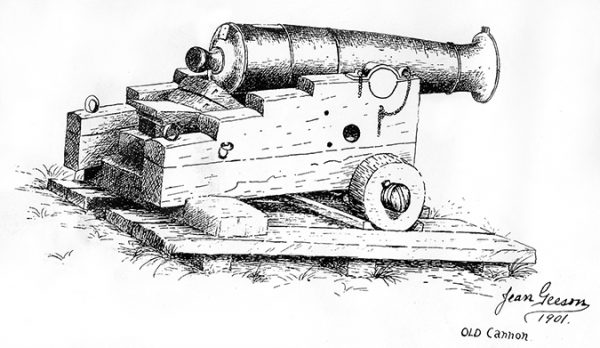 Geeson drew this 1843 bronze cannon which sits in front of Colborne Lodge, High Park, for a 1902 newspaper article. Originally part of Fort York’s arsenal, the cannon was relocated probably after the City of Toronto received the south part of the park as a bequest on John Howard’s death in 1890. Credit: Toronto Culture Collections.

Jean Earle Geeson (13 Oct. 1864 – 4 Oct. 1907), teacher, artist, journalist, and early champion of Fort York, was born in London, England, the youngest of six children of William Geeson and Emma Dansey. Her father, listed in the 1861 British census as a coffee-house keeper in Finsbury, London, was a linen draper by trade. He came with his family to Canada in August 1865. They settled first near Streetsville, Peel County, Ontario, but moved to London, Ontario, when Jean was about nine.

She attended primary school in London and continued her education at that city’s Western Art School. Having enrolled at Alma Ladies’ College in nearby St. Thomas in 1887, she graduated two years later with honours in Fine Arts. Her studies were guided by the well-known painter Frederic M. Bell-Smith, RCA, who was then director of Alma’s Art Department. In 1890-92 Geeson continued her training at the Cooper Union, New York City, and Pratt Institute, Brooklyn. In the mid-1890s she taught art in a ladies’ school in Harlem and worked briefly as a designer and decorator for the ‘Corona Novelty Glass firm’ (not to be confused with the Tiffany Glass Company, also in Corona, NY.) until ill health forced her return to Canada. Appointed a teacher of painting at Alma College in 1896, she held that post until her resignation in late 1900.

Then as now, making art went hand in hand with exhibiting and marketing it. Geeson’s debut may have been the drawing she entered in the Fine Art section of the Provincial Exhibition in London in 1889. But she hit her stride later with woodcarvings sent to the World’s Fair, Chicago, in 1893; paintings shown at the Ontario Society of Artists’ exhibits in 1903 and 1904, the latter at the Canadian National Exhibition; and at the Royal Canadian Academy show in Montreal in 1904.

Jean Geeson sketch. The East Blockhouse, more properly called the No. 1 Blockhouse, and its mate, the No. 2 or central blockhouse, were the two first structures erected in 1813 when Fort York was rebuilt after being destroyed in the War of 1812. Today the schools’ overnight program is located in the No. 1 Blockhouse; it is also used for storage. Visible in the left background is a structure of uncertain purpose that replaced the original 1814 Guardhouse and ‘Black Hole’ just inside the east gate. Credit: The Globe, 4 July 1903

Jean Geeson moved to Toronto in December 1900 and continued to study with Bell-Smith and Laura Muntz, ARCA, at their city studios. An early attempt to depict her new hometown was an oil painting of the buildings at the west end of Fort York dated 1901, now in the Toronto Public Library collections (cat. 979-19-2). The Library also has a 1902 watercolour of the mill at Lambton on the Humber River (cat. B-4 25c). Her attention fastened next on ‘High Park’ and John G. Howard who gave the land to the city. This led to the first of several pieces she wrote for The Globe; it was published 12 July 1902 and illustrated with her own sketches.

While teaching and making art may have given Geeson a modest living, it is clear Fort York provided her with a cause. On 4 July 1903 an article by her on “The Old Fort of Toronto,” appeared in The Globe, again accompanied by some sketches. When she returned to the subject in The Globe, 4 October 1905, however, it was to report that the Street Railway Company with the support of city council intended to build a streetcar line through the centre of the fort. She was the first to sound the alarm, prompting a swift reaction by the Ontario Historical Society, IODE, and Women’s Canadian Historical Society. Indignation was fanned by an article in The Globe illustrated with two of her sketches. A meeting at the fort a few days later, attended by hundreds, was presided over by the lieutenant-governor. Geeson gave a short paper followed by a speech from Nathaniel Burwash of Victoria College.

The following year she authored a 16-page illustrated booklet, The Old Fort at Toronto, 1793-1906, published on the strength of an order from the Board of Education for 3000 copies for presentation to senior classes throughout the city. That May, megaphone in hand, she began giving weekly tours of the fort to schoolchildren, attracting 300 or so each time. She acknowledged assistance with this initiative from School Inspector James Laughlin Hughes and Alexander Muir. The latter, principal at Gladstone Avenue Public School and composer of The Maple Leaf Forever, had brought about two dozen of his pupils to the mass meeting in 1905. So both Geeson and he can be credited as co-founders of a tradition of school visits to Fort York that has continued with vigour since. 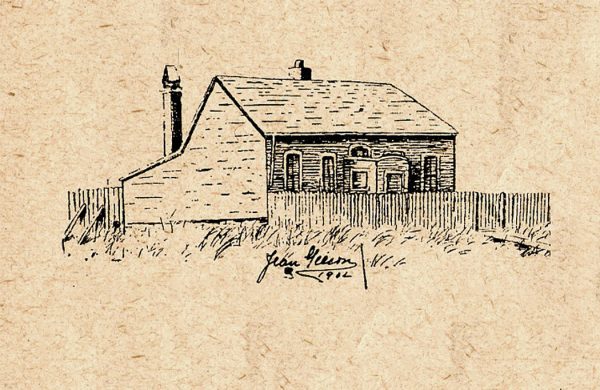 Off duty soldiers found their social centre in The Canteen. At Fort York the last in a series of canteens was built in the late 1860s just before the British Army withdrew from Canada. It stood west of the Blue Barracks. When days as a canteen ended it was used as a private residence until demolished ca. 1930. The lilacs in the bastion in the north ramparts survive from its dooryard. In her sketch Geeson took some liberties with the window-heads and transom. Credit: Geeson, The Old Fort

In 1907 Jean Earle Geeson, then on the staff of the Sunday School Publications department of the Church Record, attended the World Sunday School Convention in Rome. She filed reports from Italy as a special correspondent for The Globe. Returning to England after the conference, her assignment from the Ontario Dept. of Agriculture was to write articles for the British papers on the advantages of settling in Ontario.

Unfortunately, this assignment had hardly begun before she fell ill in late September and was admitted to the Cottage Hospital in Leek, Staffordshire, England. She died there on 4 October 1907 from peritonitis following an operation and was buried in Leek Cemetery three days later. Obituaries in both the Toronto Globe and Daily Star paid tribute to her work in preserving Fort York as a heritage site and the education of the public about the history and significance of this Canadian landmark.