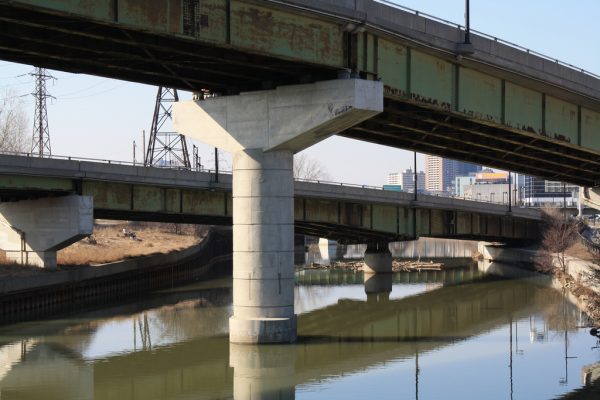 Later this fall, Spacing will publish a small compendium of pivotal civic turning points in our collective history – “25 Days That Changed Toronto.”

Yesterday was the 26th.

The joint announcement by Prime Minister Justin Trudeau, Premier Kathleen Wynne and Mayor John Tory – that the three orders will spend $1.25 billion to construct a flood protection landform and restore the mouth of the Don – marks one of those exceedingly rare moments when a city’s gradually unspooling narrative suddenly changes course. A new future appears, as if from nowhere; from here on, everything will be different. Toronto’s centre of gravity just shifted east.

The reclamation of industrial waterfront is not, in and of itself, a novelty: cities like Rotterdam, Amsterdam, New York and Sydney have all enabled this form of urban recycling. What’s so dramatic here is that the redevelopment is accompanied by –indeed, made possible by — the righting of a historic mistake, which was the Toronto Harbour Commission’s decision, taken over a century ago, to channelize the swampy lower Don and force it to make an unnatural right turn. The THC simultaneously filled in the Ashbridge’s Bay marshland – a profoundly unloved wetland that became a heavily polluted dump site – in the name of economic progress.

Some industry came, and then much left, and eventually the Toronto Port Lands, which had never delivered the pot of gold anticipated by the THC, devolved into a sprawling patchwork of half-abandoned contaminated sites and municipal storage depots. As for the river — well, we did our utmost to kill it by forcing those increasingly polluted waters through the filthy pipette that is the Keating Channel.

Not too many cities have tried to fix broken rivers. The best example I can think of occurred about a dozen years ago, when the mayor of Seoul, South Korea, liberated the Cheonggyecheon Stream from beneath a tangle of highways, creating a landmark public space and a reviving a river long left for dead.

London, likewise, has created new life and activity around the network of semi-hidden canals north of the Thames, although this project is more about updating a form of pre-industrial infrastructure than carrying out a major environmental clean-up.

The Lower Don plan — which completes what those scrappy Bring Back the Don enviro-activists began over a generation ago — will see the river permitted, at long last, to flow south, as it wants to, and then gently veer west through a wide man-made valley designed to contain 100-year floods. This flood protection landform radically alters the river’s environmental health, as well as the linear industrial geography of the Port Lands and therefore the destiny of the city. It is a project for the ages that will deservedly draw the attention of the world’s great cities.

The specific vision is the handiwork of the New York landscape architect Michael Van Valkenburgh, who now officially becomes one of Toronto’s most important city-builders. His 2007 plan for the Lower Don won a Waterfront Toronto design competition back in the late 2000s and many awards subsequently. I remember visiting the agency’s offices to view the short-listed entries and it was immediately apparent to most who saw those models that not one of them could hold a candle to Van Valkenburgh’s proposal.

WT shopped the idea around, tested it through extensive consultations and approvals processes, and finally obtained political buy-in. But then the brothers Ford bulldozed their way into the mayor’s office, In 2011, Doug, through a crony at the Toronto Port Lands Company, launched an attempt to derail Van Valkenburgh’s then thoroughly vetted proposal.

What followed was something astonishing. Doug Ford’s gambit galvanized communities not just in the downtown but up the Don, and his bid to derail the plan led to Rob’s first major loss. As a face-saving compromise, Waterfront Toronto and City of Toronto officials agreed to figure out if there were ways to streamline and monetize Van Valkenburgh’s strategy.

Through a second round of public consultations, the City and WT came up with a somewhat altered version, with more land set aside for development immediately south of the Keating Channel. But the changes were mainly at the margins: the updated plan, which has now been subjected to an incredibly rigorous series of fiscal, engineering and environmental peer reviews, remains true to Van Valkenburgh’s original vision. His grand idea has survived political stupidity, bureaucratic foot-dragging, and our usual nickel-and-diming. Its ability to endure successive 100-year political storms reveals the strength of the idea and surely foreshadows its eventual success.

But while the re-construction of the river-mouth is an environmental end unto itself, the project set in motion yesterday crucially enables the re-urbanization of a 290-hectare expanse of under-used city — a space equivalent in size to that chunk of the downtown extending from Jarvis to Bathurst, and from the lakeshore to Queen. This area, which will likely take a century to develop, represents nothing less than a second downtown – our Canary Wharf, plus a whole bunch more (e.g., the Lever site east of the Don).

The city-building that will occur there redefines our housing choices, creates new zones of employment, drastically alters our relationship with the water, re-wires our transportation patterns, and, hopefully, serves as a canvas for fresh thinking about urban form, open space, design, sustainability and culture.

All of this and more can finally happen because of what occurred yesterday. Daniel Burnham, the great Chicago architect and planner, famously advised his profession “to make no little plans.” In a city that has long sought refuge in so many little plans, Toronto finally figured out how to deliver a big one.