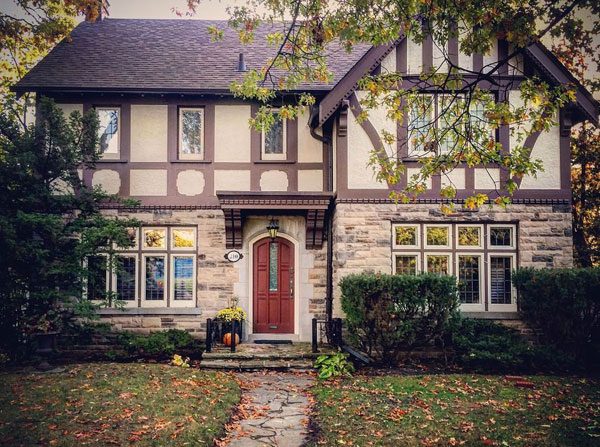 This is where Lucy Maud Montgomery died: the house she called Journey’s End. It’s on Riverside Drive in Swansea: the west end of Toronto. Montgomery spent her last decade living here, perched high above the Humber Valley as she grew old and wrote the last few sequels to Anne of Green Gables.

Those were dark years for the beloved Canadian writer. “There has never been any happiness in this house — there never will be,” she confessed in her journal. “The present is unbearable. The past is spoiled. There is no future.”

She had been suffering from depression for years — and it deepened near the end of her life. She was plagued by mood swings and waves of crippling anxiety, haunted by nightmares and painful memories, beset by headaches, vomiting, shooting pains, and trembling hands. She had difficulty sleeping. At times, she couldn’t concentrate well enough to write. The pills the doctors prescribed only made things worse, and before long she was hooked on them.

Meanwhile, her literary legacy was under attack. Once upon a time, Montgomery’s stories had been enjoyed by men, women, boys and girls of all ages — even the Prime Minister of Great Britain sang her praises. But now her work was being dismissed by a new generation of male, modernist critics who claimed her books were too “sugary” to be enjoyed by anyone but little girls, and that her stories were too regional — too Canadian — to have any appeal for a worldwide audience. “Canadian fiction,” according to one of Montgomery’s harshest and most influential critics, “was to go no lower.”

And yet she still kept fighting. Even as her depression deepened, her family life crumbled, and the Second World War broke out, Montgomery acted as a passionate advocate for Canadian authors: giving speeches and readings, imparting advice to young writers, insisting that Canadian stories were worth telling and that Canadian voices were worth hearing.

It was on a spring day in 1942 that it all finally caught up with her. On the very same day the manuscript of her final sequel to Anne of Green Gables was dropped off at her publisher’s office, her maid found Montgomery dead in bed. There were pill bottles on the table next to her along with a sheet of paper that read:

“I have lost my mind by spells and I do not dare think what I may do in those spells. May God forgive me and I hope everyone else will forgive me even if they cannot understand. My position is too awful to endure and nobody realizes it. What an end to a life in which I tried always to do my best.”

Her family kept Montgomery’s depression and her apparent suicide a secret for more than sixty years, until her granddaughter finally revealed the truth in 2008, hoping to contribute to a more honest conversation about mental illness.

“I have come to feel very strongly,” she wrote in the Globe, “that the stigma surrounding mental illness will be forever upon us as a society until we sweep away the misconception that depression happens to other people, not us — and most certainly not to our heroes and icons.”

Depression — far being from being a sign of weakness or of failure — plagued even one of the most celebrated Canadian authors of all-time.

A version of this story will appear in The Toronto Book of the Dead . Spacing is hosting the book’s launch party at the Spacing Store (401 Richmond Street West) this Friday, September 15, 7:30–10:30pm.

This post originally appeared on the The Toronto Dreams Project Historical Ephemera Blog. You can find more sources, links and related stories there.