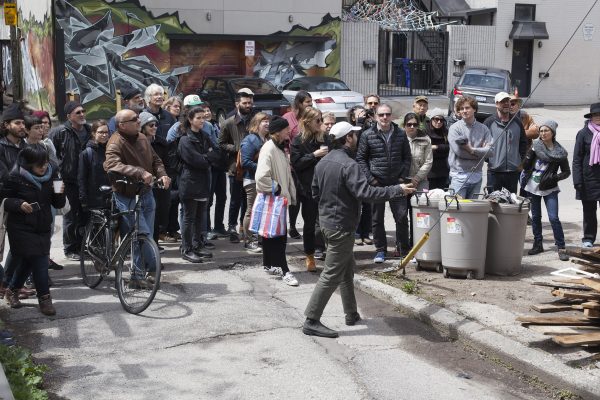 Editor: This is a guest post by Parker Kay

When you find yourself in the middle of the ocean on a day without wind, the stillness of the water stretches out to the horizon in every direction. Small ripples become the first sign of ocean-based volcanic activity, followed by plumes of pumice stones that float to the surface. Shortly thereafter, sailors report the appearance of islands in areas that were confirmed to be nothing but ocean. What these sailors don’t know is the appearance of these mysterious islands are actually a naturally occurring phenomenon called a pumice raft. The porous composition of the pumice stones not only allow the raft to float, but have also been known to ferry flora and fauna to new shores. More than an illusion on the horizon, the pumice raft represents a vessel, a network, a vehicle; its very constitution cultivates an environment where independent entities can come together towards an arrival at something new. The pumice raft provides a solid, yet flexible, foundation for the series of conversations that I have organized at The Toronto Reference Library.

Following the October 7th event on the intersections of Cinema and Architecture, the second conversation in the series titled Toronto’s Psychogeography, Spaces, and Places, focuses on the traditions of urban wandering and the associated architectural history of Toronto. Psychogeography, as a term, originates from France in the 1920s and 30s as a practice of exploring the modern city and the corresponding effects on the human psyche; however, seeds of this type of practice can be traced to the shores of Lake Ontario and the people who have settled in the area we now call Toronto for thousands of years. Branching off and feeding into the lake, the ravines and rivers run through the land like a circulatory system. The architecture came next as a manifestation of the will and desires of those who came to dwell on this land. The indelible mark that these spaces and places leave on creative output is often difficult to measure, but the psychogeographic explorer searches for exactly this. This panel, featuring Amy Lavender Harris (author, Imagining Toronto), Catherine Nasmith (president, The Architectural Conservancy Ontario), and Matt Blackett (co-founder, Spacing Magazine) will explore the practice, and tradition, of psychogeography in Toronto to show how this playful urban drifting can not only reveal new layers of the city but also how these layers affect our emotions, behaviour, and awareness.

Parker Kay is a multi-disciplinary artist and writer currently working in Toronto, Canada. With a Bachelor’s of Fine Arts degree in New Media, Kay’s practice looks at the rise of Network Culture and how the proliferation of digital communication has permeated our lives and marked our landscapes. As an avid urban explorer Kay has led walking and cycling tours with the Jane’s Walk Festival and the Centre for Experiential Research; he also has consulting relationships with Myseum of Toronto. Kay’s recent publications include “A Cube Has Six Sides” (2016) and “100 Ears: Celebrating 100 years of Dada” (2017) with recent exhibitions at Motel Brooklyn (2017), The Toronto Reference Library (2017), TOWARDS (2016), and Art Metropole (2015).

Kay is currently a researcher and collections manager at The Archive of Modern Conflict.