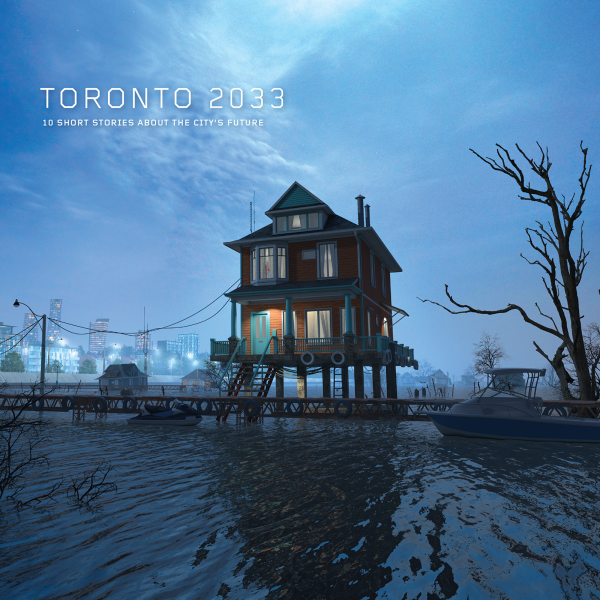 Come out on Thursday December 6th to celebrate the launch of Spacing‘s first fiction book and to kick off the magazine’s 15th anniversary.

“Toronto can feel like it’s controlled by ‘a bored social science researcher with their thumb on the fast-forward button’ (to quote William Gibson), but when science fiction writers use that high-speed reality to tell futuristic tales, it brings the city into focus: diverse, fraught, endangered, strong. A book for our moment and our city.”
• Cory Doctorow, co-editor of Boing Boing, science fiction author

“It made me laugh, it made me think, it made me imagine alternate possibilities. It made me wonder if we don’t need a Department of Speculative Fiction at city hall helping guide the city, alongside the planners and accountants and lawyers.”
• Edward Keenan, urban affairs columnist, The Toronto Star

To celebrate Spacing magazine’s 15th anniversary, we decided to look 15 years into the future. Back in December 2003, when we launched Spacing at The 360 on Queen West, we had no idea that our publication would still be thriving 15 years later. When our editors began to compile all of the different changes Toronto has undergone in that time period, we quickly realized that it would much more interesting to look forward than to look back.

The result is Toronto 2033, a collection of ten short fiction stories from a wide range of local sci-fi authors. Led by editor Jim Munroe, our authors speculate how the city and its residents will deal with numerous challenges: heat waves and rising lake water, gated neighbourhoods and suspicious neighbours, and memories of a global pandemic that tinge everyday interactions. Digital artist Mathew Borrett brings to life each story with ten remarkable illustrations of a future Toronto.

An additional five digital stories — two podcasts and three short films — will be published on the Toronto2033.com website (set to launch on Nov. 28th).

If you want to be one of the first to get the book you can pre-order the book as of today — go to the Spacing Store now. The book goes for $22, but we’re giving 15% off all pre-orders. Just use the PROMO CODE: 15off2033.