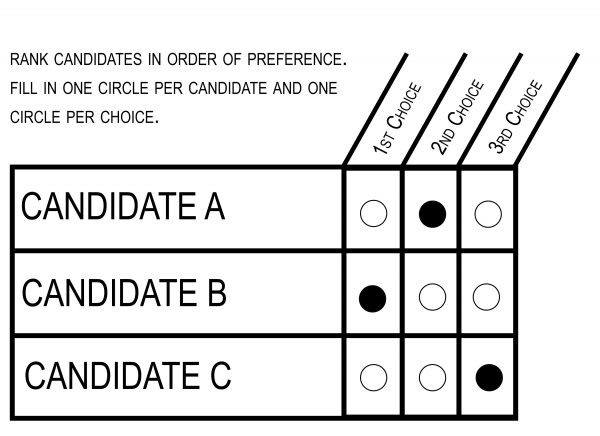 But while ranked ballots are making headway in Ontario municipal elections, they have been stymied at the federal level. Prime Minister Justin Trudeau’s promise to get rid of the current first-past-the-post election system for the House of Commons was reputedly based on his preference for ranked ballots – but opposition to this idea was pervasive enough that he abandoned his promise. Ranked ballots for a national legislature were also repudiated in a referendum in the United Kingdom (where the system was known as the “alternative vote”) in 2011.

Why these differing directions for ranked ballots in municipal versus national elections? The answer lies in the nature of ranked ballots themselves.

Ranked ballots are ideal for electing individuals to a single office. But they do not work well for elections where voters are making their choice based in large part on their preference between multiple political parties, and where the legislature should reflect those preferences as a whole.

The principle of ranked ballots is simple. Like Canada’s current first-past-the-post system, voters cast a single ballot to elect a single representative for a constituency. But, rather than voting for one candidate, electors rank their candidates in order of preference. If no candidate gets a majority right away, the bottom candidate (or candidates below a threshold) are dropped, and their votes are redistributed to the second choice on those ballots. The process continues until one candidate has the majority of the votes.

In an individual race – such as a race for a party leader, where a similar system has been in effect for all political parties for many years – the system guarantees that the winner has the most widespread support among the electors and therefore a clear mandate to represent them.

In Ontario, municipal elections do not feature political parties (although candidates may be privately affiliated with one). Thus, every race is decided on the basis of the appeal of the individual candidates. Ranked ballots ensure that councillors and mayors have the support of the majority of the voters in the area they represent. There are many other benefits, too, such as removing the need for “strategic voting” and making it more viable for a wide range of candidates to run (because there’s no fear of “splitting” the vote and because voters are not afraid of “wasting” their votes on less prominent candidates).

However, in a multi-party system where the legislature is meant to represent the overall party preferences of voters and well as individual representatives for each constituency, ranked ballots can lead to unbalanced legislatures that are even less proportional than first-past-the-post results.

Imagine, for example, three parties, left, centre, and right, who split the vote evenly – but the centrist party is everyone’s second choice. It could end up winning far more seats than it got first-choice votes, because supporters of the other parties tend to gang up with it in preference to the opposite extreme.

This situation is no doubt why Liberal leader Justin Trudeau favoured the system – the Liberals are the second choice of most NDP and many Conservative voters, and would probably gain a disproportionate number of seats under the system. It’s why the United Kingdom referendum was sponsored by the centrist Liberal Democrats, too. It is also, of course, why other parties opposed these proposals.

That’s why, for multi-party legislatures, systems of proportional representation are more effective than ranked ballots if there is a desire to get more accurate representation of voter preference for the various parties than what the first-past-the-post system provides.

The exception to the rule that ranked ballots don’t work well with political parties is a two-party system, notably in the United States. In the US, the two parties, Democrats and Republicans, are not only dominant politically, but they are entrenched in many ways into the electoral process. In such a strongly established two-party system, the danger of gang-up votes is lower, and instead the problem is that it is very difficult for independents or smaller parties to have an impact – in part because people do not want to “split” the vote in a way that would allow the party they oppose to win.

So ranked ballot voting in the United States provides a way for independents or third parties to have a chance in the face of the two-party duopoly. (It could also be argued that US elections are somewhat more about the individual candidate than in multiparty legislatures like Canada’s). This year’s US midterm elections were the first case where ranked ballot voting was used in the national elections, in Maine. (Although runoff votes – somewhat similar to ranked ballot voting – have been used in several states for many years).

It’s useful to keep in mind this distinction between individual and multiparty elections because it means that the issues that make ranked ballots unappealing for national elections are not relevant to Ontario’s municipal elections. In Ontario cities, where mayors and councillors represent only the citizens in their city or ward and do not represent a party, ranked ballots provide a way to give voters the widest number of candidate options, identify the most widely acceptable choice for an elected representative, and ensure that representative has a clear and unequivocal mandate.

(In Toronto, although City Council had earlier specifically asked the Ontario government to introduce the ranked ballot option for cities, and although polls suggested a majority of citizens support the idea, City Council reversed its position and voted down ranked ballot voting in 2015. However, Toronto could still, like other Ontario cities have done, hold a referendum on the issue in the next municipal election. If you like the idea of ranked ballots being used for Toronto elections, there’s a petition you can sign.)