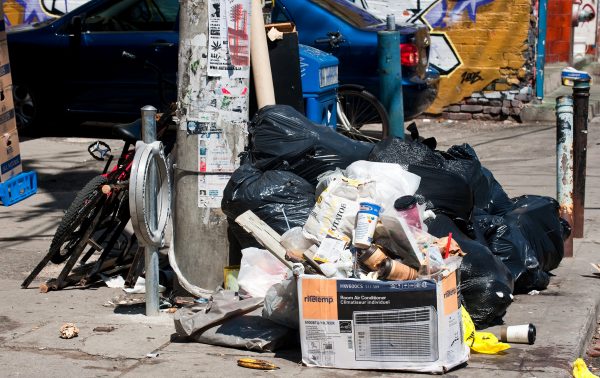 I imagine Mayor John Tory, like all good conservatives of his generation and breeding, worshipped at the alter of Michael Wilson, the storied Bay Street investment banker who served as Brian Mulroney’s finance minister during the 1980s and who passed away last month.

Wilson may have been best known, in recent years, for his advocacy of mental health issues, a place he came to following the suicide of his son. But he was also the author of the Goods and Services Tax (GST), which the federal Tories introduced, to a tidal wave of kvetching, in 1990; the 7% tax came into effect on January 1991.

Unless I missed something, the sky did not subsequently fall.

Wilson’s move, motivated by a desire to replace the broken and productivity-destroying manufacturing sales tax, was a rarity: Conservatives, even moderates, don’t like to tax. Stephen Harper’s Conservatives spent their years in power ripping holes in the federal treasury, offering up bespoke tax breaks to politically desirable voter blocks and corporations, and then hacking two points off the HST.

Indeed, if one looks at the past generation or so, the number of times Canadian governments have sought to stabilize or diversify their revenues – decisions that private businesses make all time — can be counted on two hands: the Paul Martin government’s stealthy hike to CPP premiums to prevent the gutting of Canada’s public pension system; occasional moves by various governments to index tax brackets to inflation; the federal Liberals’ 2007 gas tax; the anti-speculation taxes imposed in Ontario and British Columbia; and David Miller’s land transfer tax.

It’s a short list. We’re better at starving governments than providing them with the resources they require to deliver the services Canadians demand. We’re also adept at failing to connect the dots when the public sector begins to buckle.

Which brings me back to our mayor’s stubborn and infuriating unwillingness heed countless warnings and make unpopular fiscal decisions which are not only demonstrably necessary (e.g., Exhibit 358, the city’s inability to clear snow and ice this winter), but will also be praised by future municipal leaders and Torontonians who benefit by them. I know Tory remembers Wilson and his achievements. I don’t know why he won’t learn from them.

Poor judgment is always an explanation. I suppose Tory may be biding his time until the city’s not in the throes of a difficult negotiation with a hostile provincial regime (which is to say, never). Or maybe he just can’t grasp the principle that stewardship is integral to good governance – that you hand the thing off to the next group in at least the same shape as you found it.

I have two suggestions for turning this page, though both will require Tory to get out of his complacent comfort zone and actually show leadership.

The first has to do with framing. There was much talk this budget season about using inflation as a guideline for increasing property taxes. With the exception of the early years of Mel Lastman’s first term and a couple of years of Rob Ford’s administration, post-amalgamation Toronto council has limited property tax increases to the rate of inflation, give or take a few basis points. If more revenue is required, the city hikes its many fees and levies, or lobbies for cash transfers from the other orders. Miller alone pushed through two new tax levies, only one of which survived the meat grinder. It has kept the city in the black for much of the past decade, although, as Gil Meslin brilliantly demonstrated in this tweet storm, the LTT has left the city vulnerable to cyclical downturns in the real estate market.

The economic assumption underlying the rate-of-inflation increase is that the city’s property tax dollar shouldn’t shrink. But the very premise is incorrect in a city that adds 30,000 to 50,000 people per year. If Toronto’s population grows by more than a percentage point annually, the actual amount required to ensure that the city’s revenues remain merely stable is rate-of-inflation plus rate of growth. After all, those new Torontonians use the roads, go the library, sometimes need emergency assistance, and so on; it makes no sense that the accepted baseline doesn’t acknowledge this demographic fact of life.

Proposal two has to do with the importance of creating political space within which a timorous regime can consider a course correction. The most outspoken and high profile advocate for new revenue tools in recent years was former city manager Peter Wallace, who fought the good fight and then decamped for more clear-headed pastures.

But most politicians know that bureaucrats, even those willing to speak truth to power, do not make a constituency. They may provide trenchant and compelling analysis and evidence, but they can’t deliver much in the way of political cover.

As I watched this year’s budget follies, I was struck by all the voices I didn’t hear. Indeed, I think it’s fair to say that most of the Toronto-focused civil society groups that offer up various views on municipal government were completely MIA, even though many of those advocates privately agree that the city is in the grips of a self-inflicted and steadily accelerating revenue crisis.

Let’s name names. The Toronto Region Board of Trade? Silence. Civic Action? Same. Likewise the United Way of Greater Toronto, BILD GTA, the Ontario Home Builders Association, the city’s powerful residents’ association networks (e.g., FONTRA), the hotel and restaurant lobby, arts and cultural umbrella organizations, the universities, etc., etc. Check out the list of people or groups who submitted letters or made presentations to the budget committee. Civil society was a no-show. Really, the only significant counter-narrative came from a research group at Ryerson that produced a timely report showing how the City of Toronto’s tax rates lagged those of most 905 municipalities.

I’m not so stupid as to think that all these organizations agree on the policy fixes. But absent an effort at finding and then promoting some kind of consensus — as happened a generation ago when the United Way, under Anne Golden’s leadership, pushed the city to adopt the poverty-by-postal code approach to understanding the geography of poverty – nothing will change.

It’s dead easy for Tory to ignore the progressive voices advocating for new revenue tools and fiscal stability. My hypothesis, however, is that he’d be more challenged to sideline groups elsewhere on the political spectrum. Indeed, they’re the ones that could deliver enough political cover for him to advance the sort of changes required to put the City of Toronto on a more sustainable financial footing.

In my view, the Toronto 2020 budget season should and indeed must begin now, and in particular among the city’s non-government organizations. They all know precisely what the problem is, and the gravity of the threat that it poses.

You know who you are. Start talking.