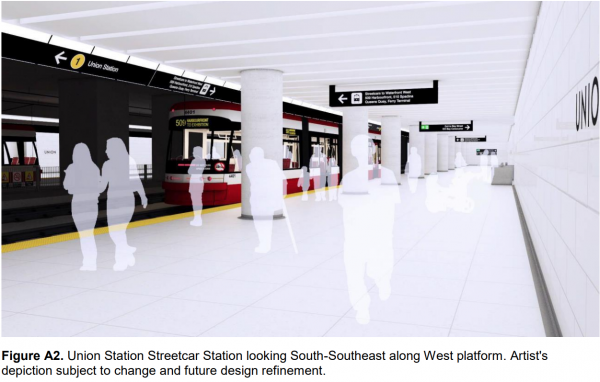 Amidst the symphony of transit yodeling that will emanate today from Queen’s Park — and then, in call-and-response, from City Hall and perhaps even Ottawa — don’t forget to remind yourself of what’s missing from this ugly outpouring of waste and pointless conflict.

As simply can’t be repeated too often, the proposed reset of the waterfront streetcar/LRT network stands conspicuously apart from all the other transit projects that continue to generate an astonishing amount of contentiousness.

There are no key constituencies, current or future, entrenched in their opposition to the waterfront streetcar/LRT route. The lines solve problems of over-crowding or lack of service elsewhere in the network. They encourage development and private investment in the eastern waterfront. They won’t impede traffic. The technology required is known and understood. And the project won’t fuel the wildly dishonest rhetoric of want that both fuels and delays rapid transit construction in the suburbs.

The waterfront line, in fact, does nothing but tick off all the evidentiary boxes. Therefore, one of the great tragedies of what passes for debate in this city, at this time, is that for all its abundant virtues, the most forward-looking transit investment now on the books remains a funding orphan. Its fate, by most accounts, appears to be locked in the muck of federal-provincial infrastructure negotiations currently being conducted between sworn political enemies.

Because everyone’s going to be genuflecting today about the York Region subway, the new stops on the Scarborough extension and the fancy-schmancy relief line technology that apparently caused the premier’s jaw to flap like a sail in high winds, it’s worth pausing to consider the overlooked developments on the waterfront network, laid out in a staff report tabled at executive committee.

Most significant is the fact that City of Toronto-TTC officials working on the most technically challenging aspect – linking the proposed Queen’s Quay East LRT to Union Station – have come forward with a recommended technology and configuration that makes compelling sense for both riders and the network — a significant but unheralded engineering breakthrough.

While the province barrels ahead with yet another historic misadventure in non-contiguous technology for the “Ontario” line, analysts for both the city and TTC conducted a detailed side-by-side assessment of two transit modes that could link the Union Station loop to the east-west corridor on Queen’s Quay.

One was an automated people mover, not unlike the one that connects terminals 1 and 3 at Pearson International. It would move continuously in a circuit through the tunnel between Union Station and a transfer point at Queen’s Quay and Bay, where passengers would connect to east-west streetcars.

The other proposal is creating a larger streetcar station at the Union Station end, with four platforms situated underneath the train shed, and which would allow both east- and west-bound waterfront streetcars to divert to Union and return to Queen’s Quay. The doubled-up platforms will permit streetcars heading in opposite directions to pass one another, and also include exits up to the GO retail concourse.

In the end, the staff have proposed sticking with maximum connectivity instead of forcing riders to switch from subway to people mover to streetcar (or visa versa). It’s the right call: the University of Toronto’s GTA ridership projection model anticipates that traffic through the Union Station-Queen’s Quay tunnel beneath Bay is expected to swell from 1,000 peak hour passengers currently to 4,000 to 8,000 in coming years, due to new residential and office development along the waterfront east of Yonge, as well as increased tourist and special events traffic to the west.

While the people mover option would likely see slightly higher overall ridership, according to city forecasts, the convenience factor held sway. Both versions of the entire waterfront transit network — which includes an extension in the west end to the Queensway, as well as a new connection through the CNE to the Dufferin Loop — are expected to cost about $2.05 billion in 2019 dollars.

That funding, needless to add, is completely missing in action. In the frenzy of horse-trading and triangulation between the city, the province and the feds, there’s still no formal ask, despite a council motion from a year ago which positioned the waterfront transit network as a “priority project” for the Federal Public Transit Infrastructure Fund. As city staff reported in January, 2018, “The Integrated Bilateral Agreements (IBAs) between the Federal Government and the province and territories are on-going, and expected to conclude by March 2018.”

No word on what happened subsequently, although you don’t need to be a political scientist or a seer to figure it out. In the hefty transit progress update that landed at executive committee yesterday, there was not so much as a dime of funding for the waterfront network, except for a request that staff continue developing its cost estimate, which is bureaucratese for keeping the puck in play.

As we all know, the lion’s share of the $12 billion in estimated spending by the three levels is going to subways and Smart Track, with most of these projects now dramatically more expensive than previous estimates. And this is just City of Toronto information. Today’s announcement by Doug Ford, and whatever depth charges are buried in tomorrow’s budget, will throw more spanners into this mess.

It’s worth pointing out that a group of large private developers, who between them own 50 hectares of waterfront real estimate and have approval to construct some 20 million sq.-ft of mixed use projects, took the unusual step of sending an open letter to Mayor John Tory and the executive committee. In it, they urge that council get on with the Union Station connection and the eastern leg of the project, which is expected to cost a comparatively modest $612 million.

“A real opportunity exists to deliver meaningful new transit along with ridership to support it within a five year timeframe,” these CEOs wrote. “We cannot delay delivery of the Waterfront LRT any longer.”

They’re absolutely right, and one might think they’d even have some sway. Nope: delaying delivery is precisely what our elected representatives are going to do.